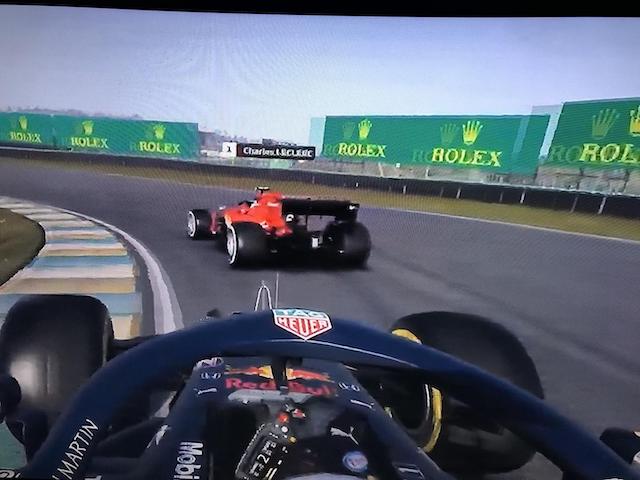 Formula One darling Charles Leclerc missed out on victory on Sunday, but still made the podium, in the F1 Esports Virtual Grand Prix Series race modelled after the Interlagos track in Brazil.
Sunday’s F1 Esports Virtual GP Series race was hard fought back and forth between Ferrari’s Leclerc and Red Bull’s Alex Albon, with Albon pulling off his first esports victory despite the best efforts of the Monegasque. To add insult to injury, Leclerc was slapped with a penalty of three seconds for getting a little aggressive on the track. This error cost him the number two spot, forcing him to hand it over to Williams’ George Russell.
Interlagos has been the source of trouble for Leclerc in the past. Last year, it was the scene of the now-infamous crash between he and teammate Sebastian Vettel, where both men used thinly-veiled politeness to cover up what grew to simmering anger over the events that left both pilots off the podium.
After the race, Albon admitted to being more than a little nervous. “I was shaking afterwards, I had so much adrenaline in my body,” he said. “I feel more scared driving a simulator than I do the real thing. The pressure was unbelievable.”
Leclerc took responsibility for this misstep as well as for a strategic error he believes cost him the race. He attempted a pit stop to try and get the better of Albon, but the plan didn’t quite work. On his Twitch channel he and his rival chatted amiably in a post-race debrief, picking each other’s brains regarding the outcome.
“It is my fault,” Leclerc said in the end. “Bad strategy… I changed the tires too early (NOTE-in the 13th of 36 laps). Then, on hard tires, we had to fight to continue playing with Alex. Despite everything, it was a fun race thanks to the DRS.”
But all was not lost for la famille Leclerc. Little brother Arthur took first in F2’s first virtual race that saw 19 competitors on the track modelled on Bahrain.
Better luck next time, Charles!