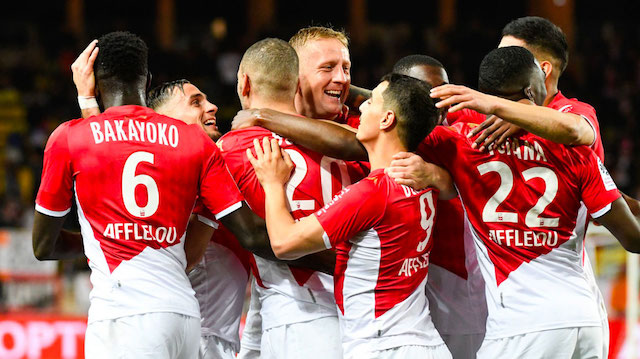 Islam Slimani managed the only goal of the game as AS Monaco came out victorious over Montpellier Hérault SC 1-0 at the Stade Louis II on Friday, replacing their visitors in fifth with the win.
Monaco welcomed Montpellier to the Principality without suspended midfield pair Adrien Silva and Aurélien Tchouameni, and their defence looked particularly exposed when Florent Mollet found space in the box early on but his shot hit Benjamin Lecomte’s legs (6′). Monaco soon settled into their stride, though, and Slimani came close to breaking the deadlock at the other end after a nice one-two with Wissam Ben Yedder, only to see his effort was comfortably collected by Dimitry Bertaud – standing in for the suspended Geronimo Rulli – in the Montpellier goal (17′). Robert Moreno’s side should have carried at least a 1-0 lead into the interval. Aleksandr Golovin missed a gilt-edged chance from close range (27′) before Slimani headed past the far post (35′). Stevan Jovetic the span a wonderful attempt from the edge of the box narrowly wide (37′) before Ben Yedder found the outside side-netting (39′) and referee Ruddy Buquet’s whistle went with the scores, somehow, at 0-0.
The second half was less than 10 minutes old when Slimani made amends for his first-half profligacy, though. Golovin swung a corner into the visitors’ box and Slimani met it ahead of Hilton to head home his ninth goal of the Ligue 1 Conforama campaign (52′). Tiemoué Bakayoko – making his own timely return from suspension at just the right time with Silva and Tchouameni sitting out – then came close to doubling Monaco’s lead when he met a Ben Yedder cutback but his effort crashed back off the woodwork (70′). Ben Yedder and Slimani combined again late on, but this time Slimani failed to get his feet sorted out in time and the chance went begging (83′). Monaco nonetheless looked comfortable in closing out the 1-0 win which lifts them into a provisional fifth.
Slimani has had to fight for his place since Moreno succeeded Leonardo Jardim as coach in December, but having scored goals as a substitute against Paris Saint-Germain and Amiens SC since the turn of the year, he started in attack alongside Ben Yedder and Jovetic and was once again the stand-out player. Slimani is also a maker – only Angel Di Maria has laid on more than the Algerian’s eight this term – and Monaco would do well to at least extend his loan from Leicester City beyond the end of the season.