This is the latest tool in Monaco’s digital transformation 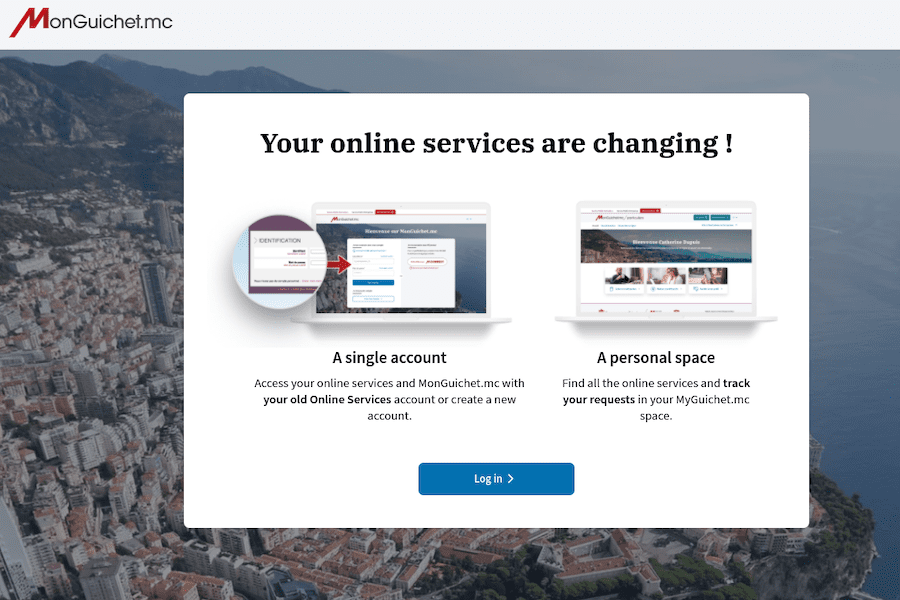 The government has launched a new online portal that brings administrative tasks and documents together in one virtual location. The site, Monguichet.mc, will simplify administrative processes and is part of the larger campaign to digitise the Principality.

The platform prioritises ease of access, which is why it is accessible 24/7, as well as being available in both English and French.

Director of Digital Services in Monaco Julien Dejanovic was, however, keen to emphasise that the portal, which will allow users to carry out over 70 administrative procedures online, is not a replacement for the paper format. “The online portal is a compliment to the physical counters. We are not going to replace them. It is truly an added service. People not wishing to use them will still be able to carry out their procedures in person.”

For those who choose to use this new service, they will find a more simplified, easy-to-use and centralised service, which will allow any public service administrative procedures to be carried out in one place. Thanks to a collaboration with the Mairie, any procedures related to this department will also be managed on the digital platform.

Dejanovic underlined the ambition of the digitisation campaign in Monaco, stating that the portal was simply a first step. “Monguichet.mc is the first stage. We want to progress on two axes: the first is quantitative, meaning we are going to continue to offer more services online… The second is increasing the quality of the service, with the option of online meetings, as well as the capacity to store administrative documents online.”

The platform also compliments the Principality’s digital identity system which launched earlier this year, and those in possession of it will benefit from a simplified connection and, in time, access to a greater quantity of online services.

Monguichet.mc is part of a larger digital revolution that is taking place in the Principality, under the stewardship of Frédéric Genta, Interministerial Delegate in charge of Digital Transformation. The aim is to have digitised all day-to-day administrative procedures by the end of 2022.

Nadal stars both on and off the... 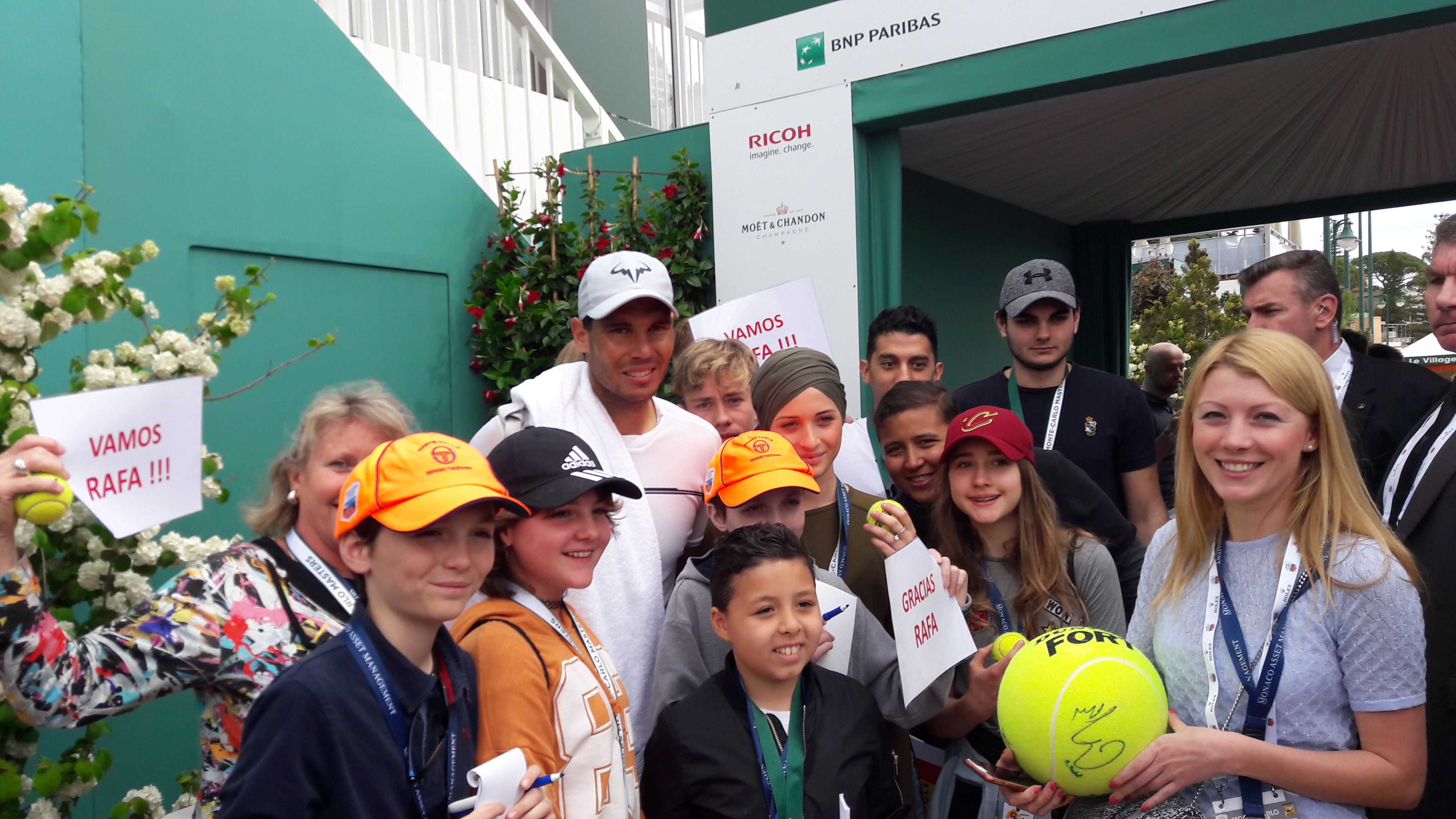 Rafael Nadal meets children during the 2018 Indigo-Tennis Day.[/caption] The initiative of Indigo Tennis Day, organised with Indigo, the children’s cancer support association, and Monaco Asset Management, was born thanks to the generosity of Anthony and Karin Stent Torriani, who for 15 years have offered a dream day to a dozen children during the Rolex Monte Carlo Masters. By offering their boxes during the first day of the tournament, Monaco Asset Management offers young cancer patients a chance to watch the champions play on the clay courts and meet tennis stars like Nadal or Federer on the training courts or other players in the VIP area, allowing the children to get up close to their idols with a chance to ask for an autograph. The group is also invited to the restaurant and presented with souvenir Nike t-shirts and gadgets, courtesy of Nike Monaco owner Kory Tarpenning, to remind them of an exceptional day. It’s emotional for everyone involved to see their young eyes light up as they share their experiences with others – like separation from family members, such as the child who underwent a marrow transplant in Marseille. For one day at least they get to live and be treated like normal kids. [caption id="attachment_30450" align="alignnone" width="1024"] 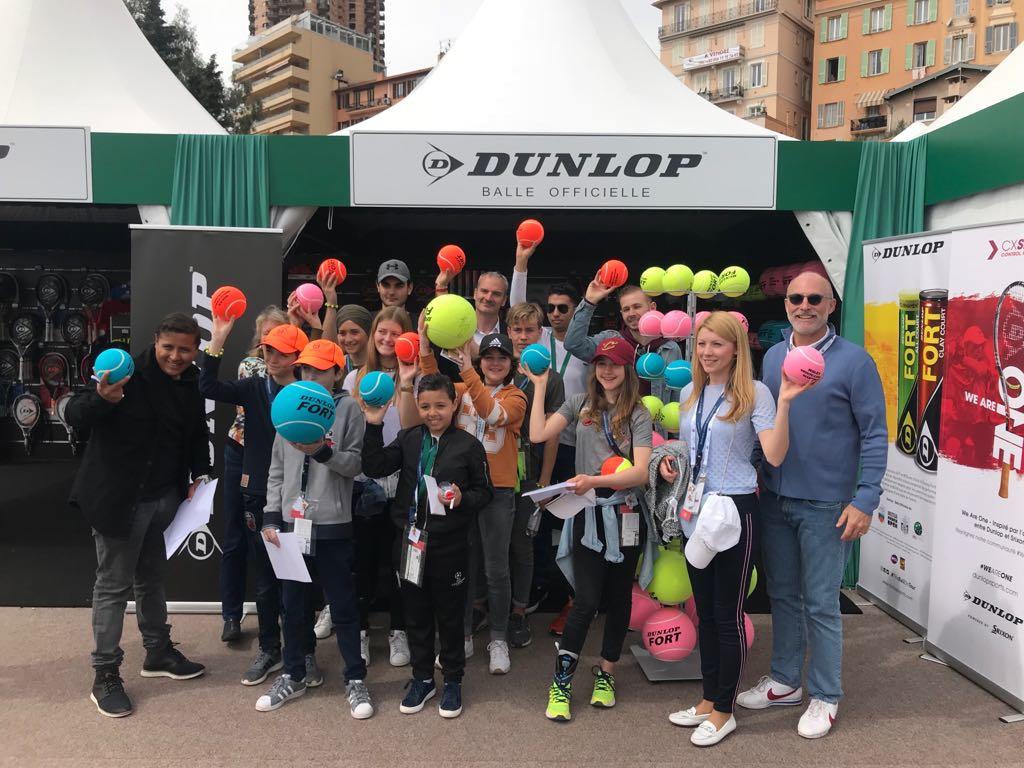 Nike Monaco supplies the Indigo group with t-shirts and gadgets.[/caption] Among the standout memories over the years: Dimitri playing wheelchair tennis with Nadal cheering him on; Federer meeting the group in 2011 (“I saw him, I touched him, my shoulder was against his arm ..."); and Thomas, a young tennis potential from Vence who while in hospital for febrile aplasia received an autograph and a t-shirt signed "for Thomas with affection" by Nadal, (he framed the T-shirt and kept it in his room). The following year, Thomas attended Tennis Day and showed a photo of the framed tee to his idol Nadal, who he was finally able to meet shake hands with. Thomas is still in treatment for leukaemia but has become a brilliant finance specialist in the US. With humility and gratitude he said: "Thank you, you saved my life.” This year’s Tennis Day on April 14 was exemplified by acts of kindness. Nadal once again came by to meet the young fans and David Goffin featured in many of the kids' selfies. [caption id="attachment_30460" align="alignnone" width="1052"] 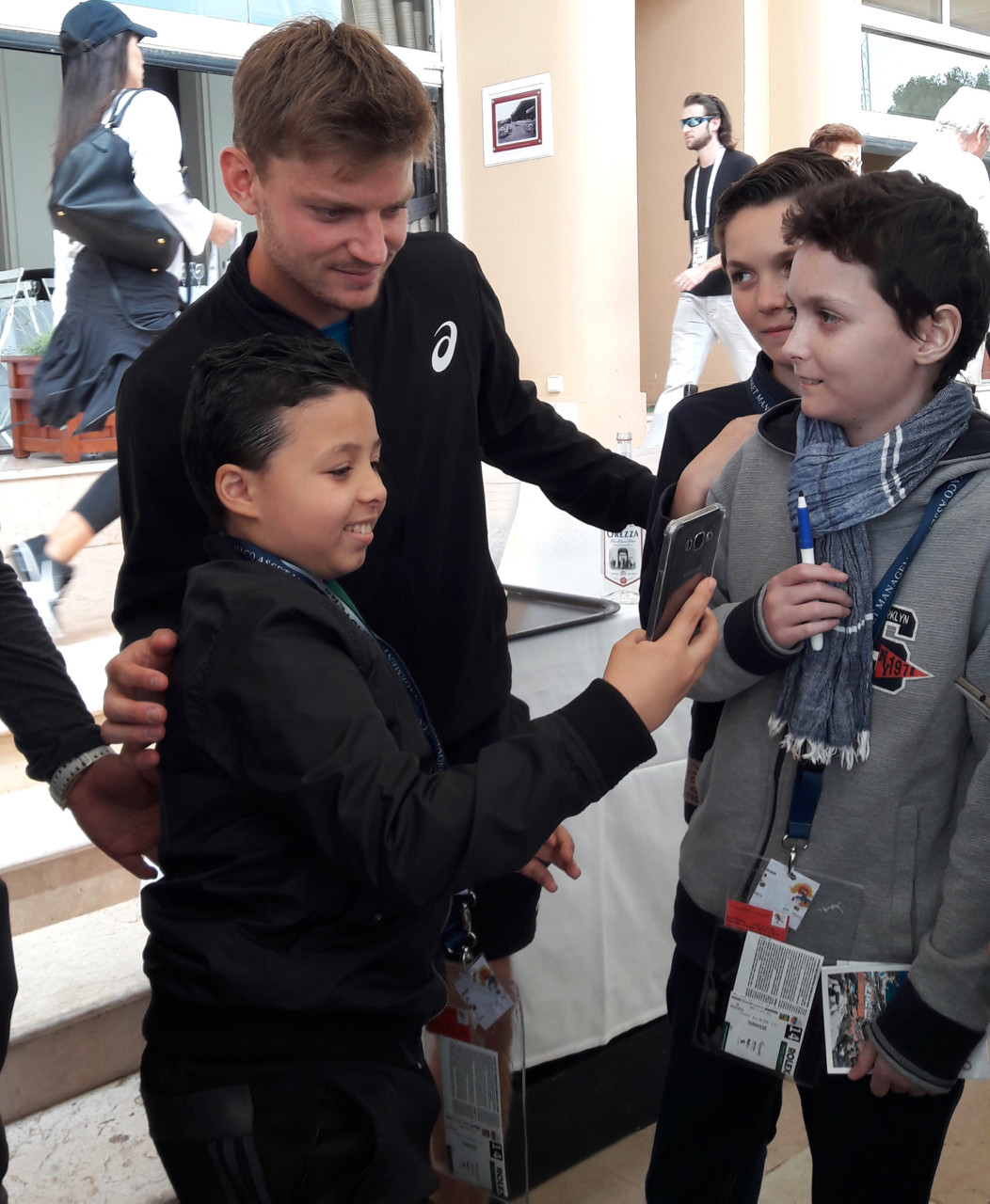 David Goffin poses for selfies with the kids.[/caption] “To see these champions with their strength, their efforts, their will and their fragility is a part of the humanity that connects these children to their experience of the disease ... so Rafa, Roger, Tomas and all of you champions continue to watch them and take the time to meet and give an autograph that will continue to fill their minds with dreams even when they are back to reality,” said Dr Anne Deville, who has been working with Indigo for many years. She added, “How do you thank Karin and Anthony, Viera the communication wizard, and the sponsors, each of whom contributes to the smiles on these young faces that we see throughout the day and on the train home ... for Indigo and their parents, what a treat to see them happy and alive again after their illness.” The Indigo Association was created in 1993 by Mireille Goy-Kreitmann, a psychologist working with the oncology service of Lenval Hospital in Nice. The non-profit, which merged with Archet Hospital in 2004, works to improve the quality of life and the quality caring for children with cancer and to participate in the training of caregivers. Some of its initiatives include organising activities, such as weekly visits of clowns, sophrology sessions and a film course, for hospitalised children. Through a painting workshop, Indigo has been able to put together exhibitions to display the children’s work at the Museum of Modern Art and the Matisse Museum, both in Nice. [gallery td_select_gallery_slide="slide" size="large" ids="30454,30453,30456,30455"] Additionally, Indigo participates in the financing of leisure and sports outings for the children outside the hospital. All these activities help to show that despite illness and care, life goes on for the children who remain creative and active. Anyone can become a member of the Indigo Association or donate, knowing that they will help children to participate in creative or fun activities and continue to live a full life, despite the serious constraints of treatment and care. So when you're watching Nadal play in the championship match Sunday as he seeks his 11th consecutive Rolex Monte Carlo Masters title, give thought to the Indigo Tennis Day Group, too. We can all learn from these exceptional children, who battle it out every day for a win and provide us with lessons of courage and hope equal to that of any sports legend. [caption id="attachment_30571" align="alignnone" width="640"] 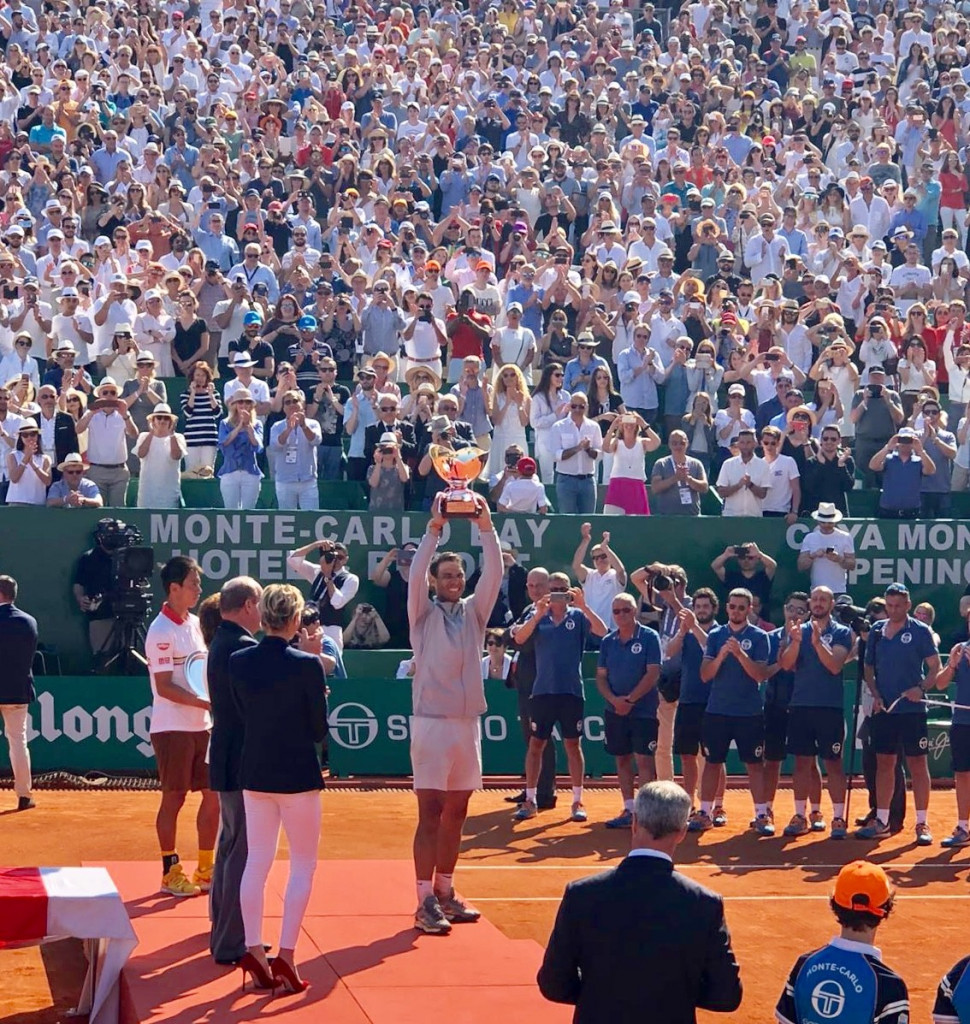 Local News Stephanie Horsman - January 20, 2022
The celebration of Sainte Devote, Monaco’s Patron Saint, will be held next week, and again this year the Principality is taking adapted measures to ensure the health and safety of all who wish to participate.