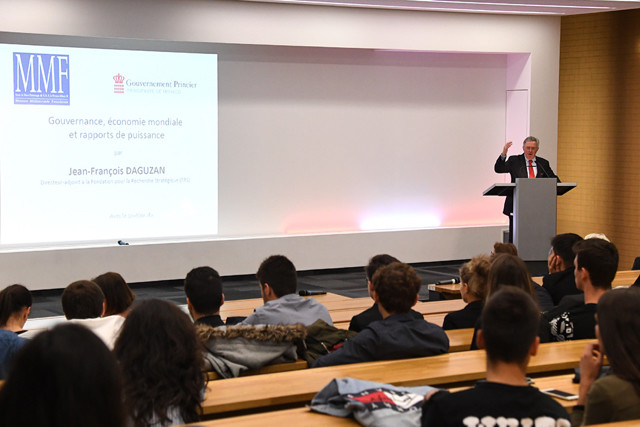 Photo: Manu Vitali/DC[/caption] On Thursday, May 4, at the Auditorium of the Monaco Technical and Hotel School, the last conference of the school year dedicated to major contemporary issues and organised by the Monaco Méditerranée Foundation was held in the presence of Patrice Cellario, Minister of the Interior. Jean-François Daguzan, Doctor of Law and Political Sciences, spoke on the theme "Governance, world economy and power relations". Mr Daguzan is Deputy Director of the Foundation for Strategic Research (FRS), formerly in charge of France’s General Secretariat of National Defence (SGDN) of the Prime Minister for industrial matters. He is Editor-in-Chief of the magazine "Geo-Economics" and Director of Maghreb-Machrek. President of the Scientific Council of the Institut Choiseul, he also acts as an auditor of the 49th session of the Institute of Higher National Defense Studies (IHEDN). For the last two years, the Monaco Méditerranée Foundation, chaired by President Enrico Bragiotti, has organised a series of high-level conferences devoted to the main issues of the contemporary world. Prince Albert – particularly attentive to the need to prepare the younger generation to act conscientiously and with responsibility to build their future – was keen to place these strategic conferences under His High Patronage. Enrico Bragiotti, initiator of this programme, wanted to associate fully with its innovative approach the Directorate of National Education, Youth and Sports, under the responsibility of Isabelle Bonnal. These conferences were initially open to high school students receiving general education in the Principality and were quickly taken up by many pupils who expressed their wish to attend, on a voluntary basis, these exchanges on sensitive and strategic topics. The quality of the speakers and the content, both highly specialised but also adapted to the audience of their speech, have contributed significantly to this enthusiasm. These exceptional meetings allow students of the Principality's general, technological and vocational education, students of the Sciences Po Menton Campus and the International University of Monaco, to exchange ideas with experts and speakers who are renowned specialists in the fields of economics, international relations, and geopolitics. At the end of the last conference of the year, the pupils who followed the whole lecture course received a diploma attesting to their active participation in this cycle of training in the challenges of the contemporary world.

Local News Staff Writer - January 14, 2019
Monaco Economic Board says life in Monaco is so good that the Principality has become a victim of its own success.