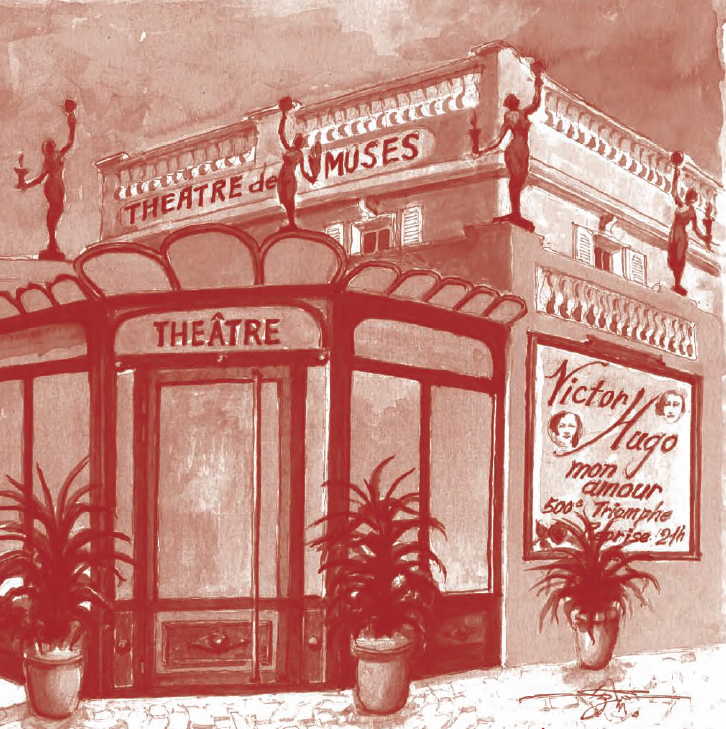 The Gorilla by Franz Kafka with Brontis Jodorowsky 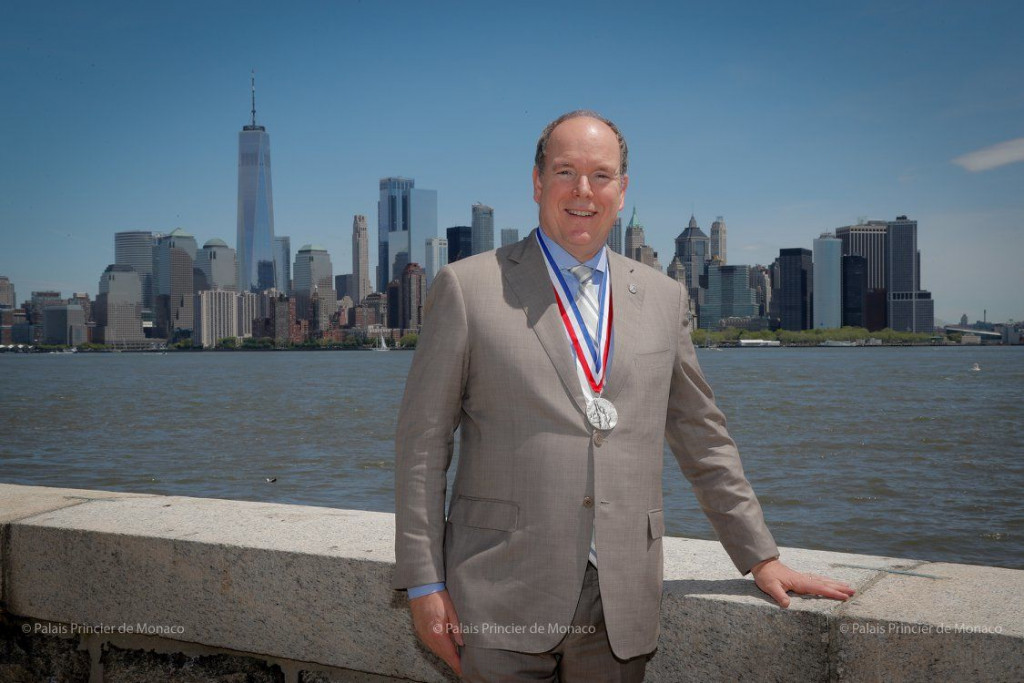 Photo: F. Nebinger/Palais Princier de Monaco[/caption] Prince Albert was awarded the Medal of Honour of the Ellis Island Honour Society by Nasser Kazeminy, the society’s President, on Friday, May 11, in New York. The medal rewards those who embody the "Spirit of America" in its values of tolerance, fraternity, diversity and patriotism. Officially recognised by the US Senate and Congress, this is one of the most prestigious honours in the country. Ellis Island covers about ten acres south of Manhattan and at the end of the 19th century and until the mid-20th century, the island was the main entry point for immigrants to North America. Several members of Prince Albert's maternal family immigrated to the US from Ireland via Ellis Island. [caption id="attachment_31003" align="alignnone" width="640"] 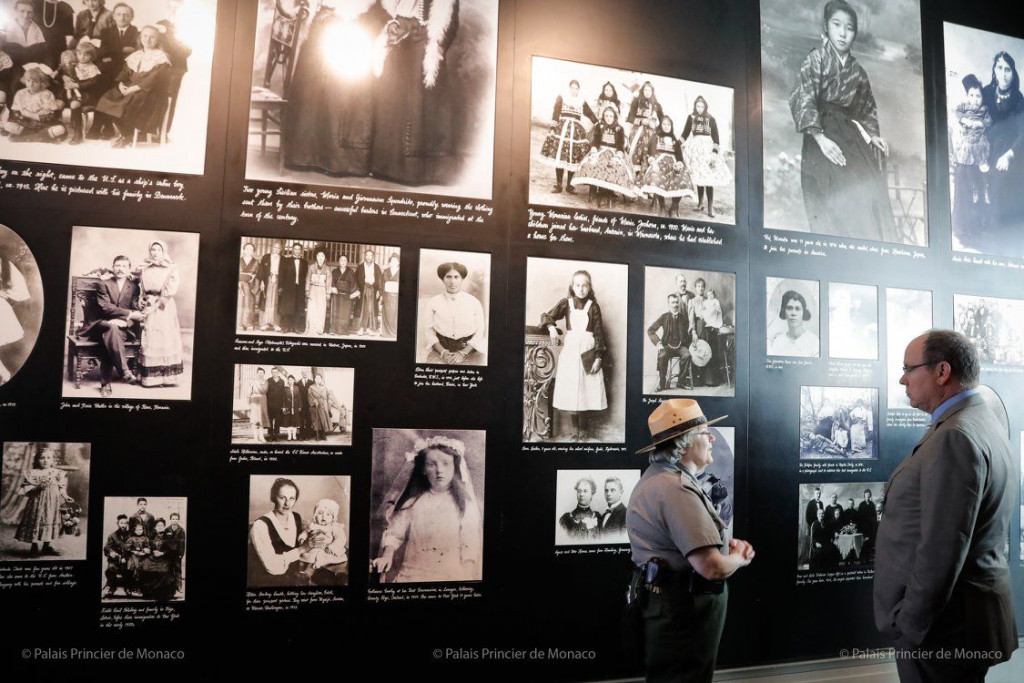 Photo: F. Nebinger/Palais Princier de Monaco[/caption] The island welcomed nearly 12 million immigrants from Europe and the Middle East, between 1892 and 1954, the year of its closure. After long years of neglect, Ellis Island was transformed in the early Nineties into a museum and now only welcomes tourists. Four million of them flock there each year, alternately visiting the Statue of Liberty on "Liberty Island" and then Ellis Island. In the afternoon, Prince Albert headed to Philadelphia to inaugurate the "Kelly House", the family home of his mother, Princess Grace, and her three siblings Peggy, Kell and Lizanne. “She seemed to have a very happy childhood, and it was a lot of games, a lot of fun things that were happening there,” Prince Albert told PEOPLE Magazine, “and it felt like a real family home. It was a real place of gathering and rejoicing.” Albert also said that visiting Philadelphia and the Jersey Shore with his mother and two sisters, Princess Caroline and Princess Stéphanie “was always a great experience”. “It was a sense of freedom that probably wouldn’t have had in other places. In those days it was not even talk of any security, so we would run off with our cousins on the beach or on the boardwalk. And when we needed to be picked up we called home and someone would come and pick us up.” [gallery td_select_gallery_slide="slide" size="large" ids="31001,31011,31009,31008,31004,31007,31002,31012,31005,31006,31000,30999"] 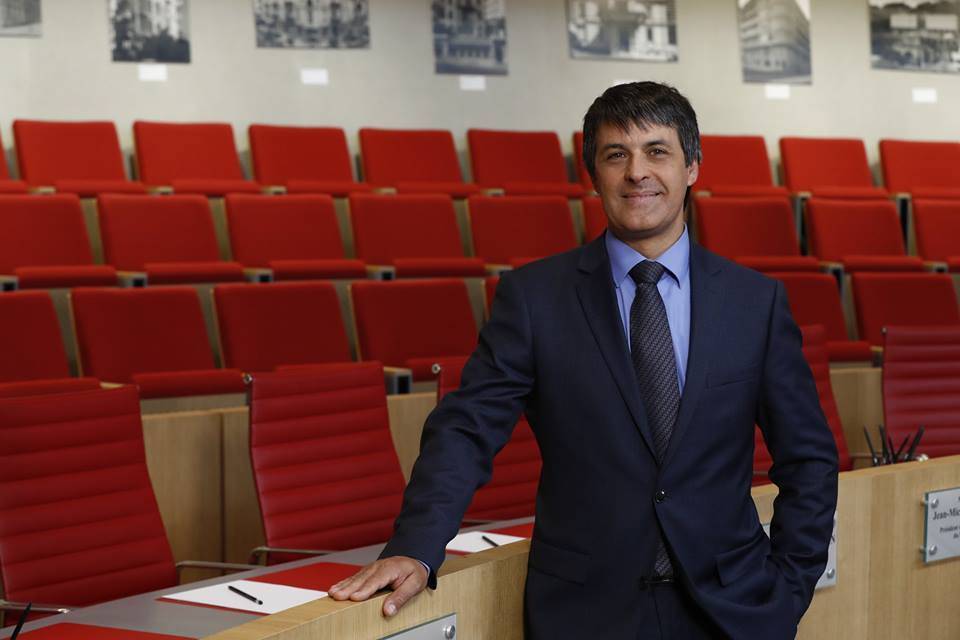 Thierry Poyet. Photo: Facebook World of Blockchains Monaco[/caption] ML: In your own words, what is a blockchain and why are people overly-excited or overly-concerned about its future? TP: Although blockchain was used to create Bitcoin and is known for that, there is actually  much more to it. Blockchain is a peer-to-peer technology to transfer information with maximum security so that each computer holds an identical copy of a digital ledger. However, it’s confusing because not all blockchains have an associated cryptocurrency and not all are recorded publicly. With all these components, blockchain is a new way to invent some services, in our day-to-day life, such a universal real-time health record for patients, trade finance, and preventing data security breaches. There is also a lot of discussion about how blockchain will decentralise data and AI. As for the good and the bad, just look at Warren Buffet who said bitcoin is “a farce” but then his railroad subsidiary BNSF Railway Co – the second largest railway in North America – officially joined the “Blockchain in Transport Alliance” recently. ML: You are hosting a conference tonight at Monte Carlo Bay called “Monaco and Challenges of the Blockchain Revolution”. Who decided to create the association World of Blockchains Monaco (WBM), and what is its mission? TP: At the end of 2016, after several months of exchange on uses and advantages of blockchain technology for citizens and states, Jean Philippe Claret, Marc Lipskier, Yannick Quentel and myself agreed to open a World of Blockchains entity in Monaco. In France, the association was created earlier, in September 2016, and its president Marc Lipskier wants to promote synergies with Monaco. Indeed, the Principality has great assets to deploy through blockchains: smartgrid, health, events, and sustainability. The Monegasque association World of Blockchains Monaco was thus created in April 2017, with the founding members: Bettina Raggazzoni, Yannick Quentel, Jean Philippe Claret, David Pariente, Marc Lipskier, Jean Leonard Taubert and me. The purpose of the Association is to promote the adoption of blockchains in all sectors of activity of the Principality and to animate a community of developers, innovators and entrepreneurs to enhance the attractiveness of Monaco. ML: You held your first meeting on January 9, 2018. What was discussed? TP: With just a single post on social network four days before the meeting we managed to assemble 80 people. It was incredible. We met companies in IT solutions working in Monaco and developing services in blockchain, startups from in or around Monaco trying to take their ideas live, and international companies wondering if the law proposal 237 could help them to install and develop services from Monaco. This is why we are hosting the “Monaco and challenges of the Blockchain Revolution” conference tonight, with Edmond de Rothschild Private Banking, because there is so much interest in the subject. The event is sold out. ML: At the end of January, Bill 237 was approved by Monaco’s elected National Council in order to promote the activity of blockchains in the Principality. The bill’s text also created the Monaco Authority of Blockchains (MBA). What is the significance of this bill and will you work together with MBA? TP: The creation of a Monaco Blockchains Authority will refer experts to evaluate the projects presented to ensure they are adequately inline with Monaco’s strategy and the values promoted by the Principality. Additionally, MBA will provide technological, regulatory and competitive intelligence. The objective is to create a new economic activity in Monaco, a "Blockchain Valley" so to speak by offering a regulatory framework adapted to attract to Monaco the actors of this sector. ML: It was announced in January that Chinese authorities plan to block domestic access to Chinese and offshore crypto-currency platforms that allow centralised trading. Is this a blow to the future of blockchains? TP: Crypto-currency is a nightmare for some governments because it’s impossible to introduce legislative control. The question today is not about crypto-currency but what kind of crypto: based on official currency like the Euro or Dollar, or totally new, such as digital bearer instruments like Bitcoin or Ether. As Ravi Menon, Managing Director of the Monetary Authority of Singapore, said on March 15, “A challenge for central banks and regulators is how to harness the potentially transformative benefits of blockchain technology and crypto tokens while containing some of their risks.” The first edition on Monaco International Blockchain takes place on May 16 and May 17 at Grimaldi Forum. Article first published on April 9, 2018.