Reception in honour of graduates obtaining the...

Local News Staff Writer - July 12, 2018
The students gathered on the roof terrace of the Technical and Hotel High School, where the Minister congratulated the laureates for their success.

Inside Baselworld 2018 with Antonio Cecere: Special... 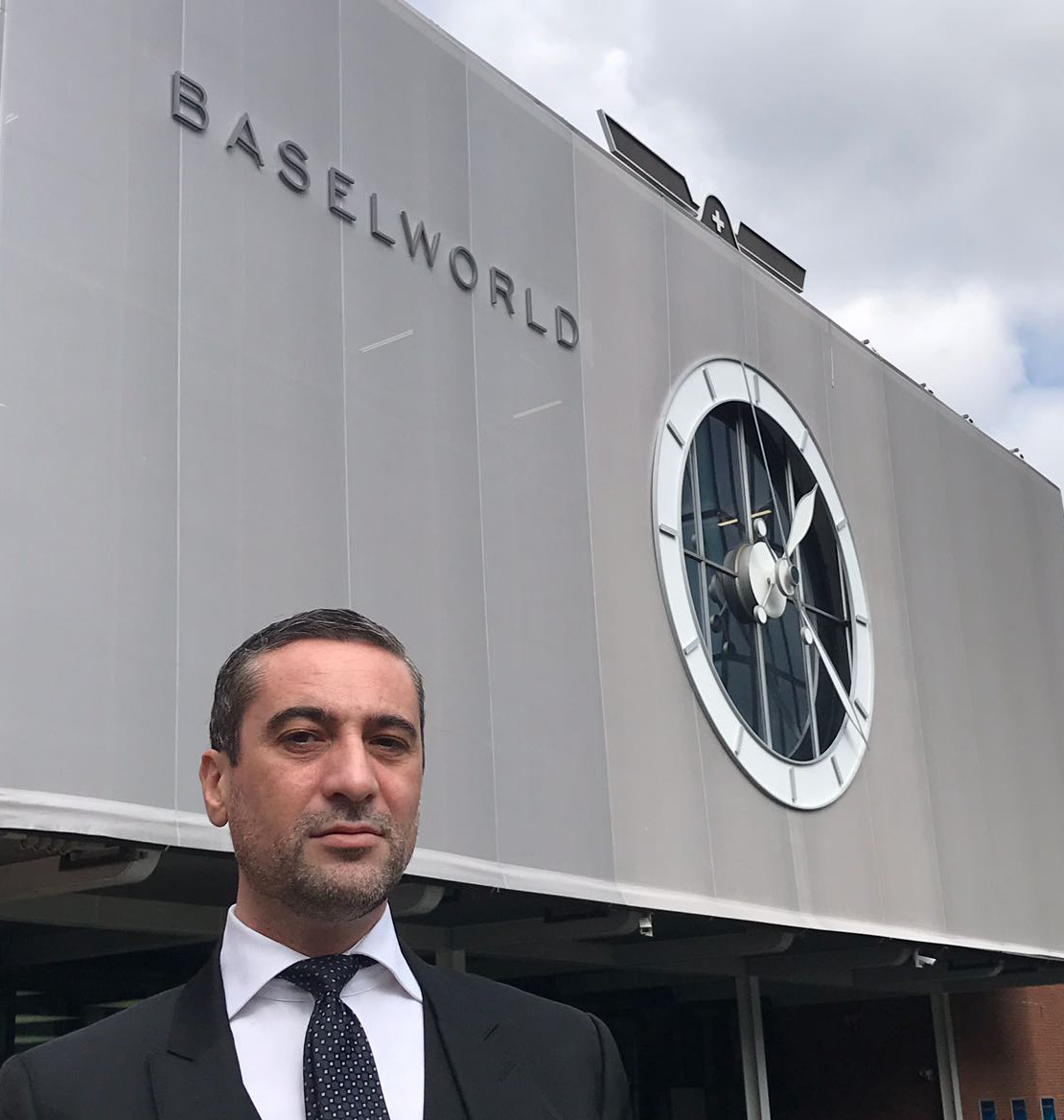 Industry insider Antonio Cecere, Principal of Cecere Monaco and Founder of Monaco Diamond Exchange, talks about his experience at Baselworld 2018.

ML: How was Baselworld this year and what are the highlights in grand complications haute horlogerie? AC: Graff hosted a cocktail event to present their new collections, which remain focussed to employ computer aided design (CAD) and 3D printing in order to create lightweight high-jewellery watches that are easy to wear with very little metal on show. Francois Graff, CEO of the family-run luxury house, revealed that they are currently working on “two secret watches” for women pushing the boundaries of innovation and creating designs that are far more complex in their construction. Graff’s new launches at Baselworld 2018 included the Mastergraff Gyrograff with a double-axis tourbillion, three-dimensional moon phase and power reserve indicator – the peculiarity of these watches are the automotive-inspired dials which are extremely difficult to make and require a completely dust-free environment during the decal phase of the work when each element is transferred from the engraved plate to the dial using a silicon pad. [caption id="" align="alignnone" width="3228"] 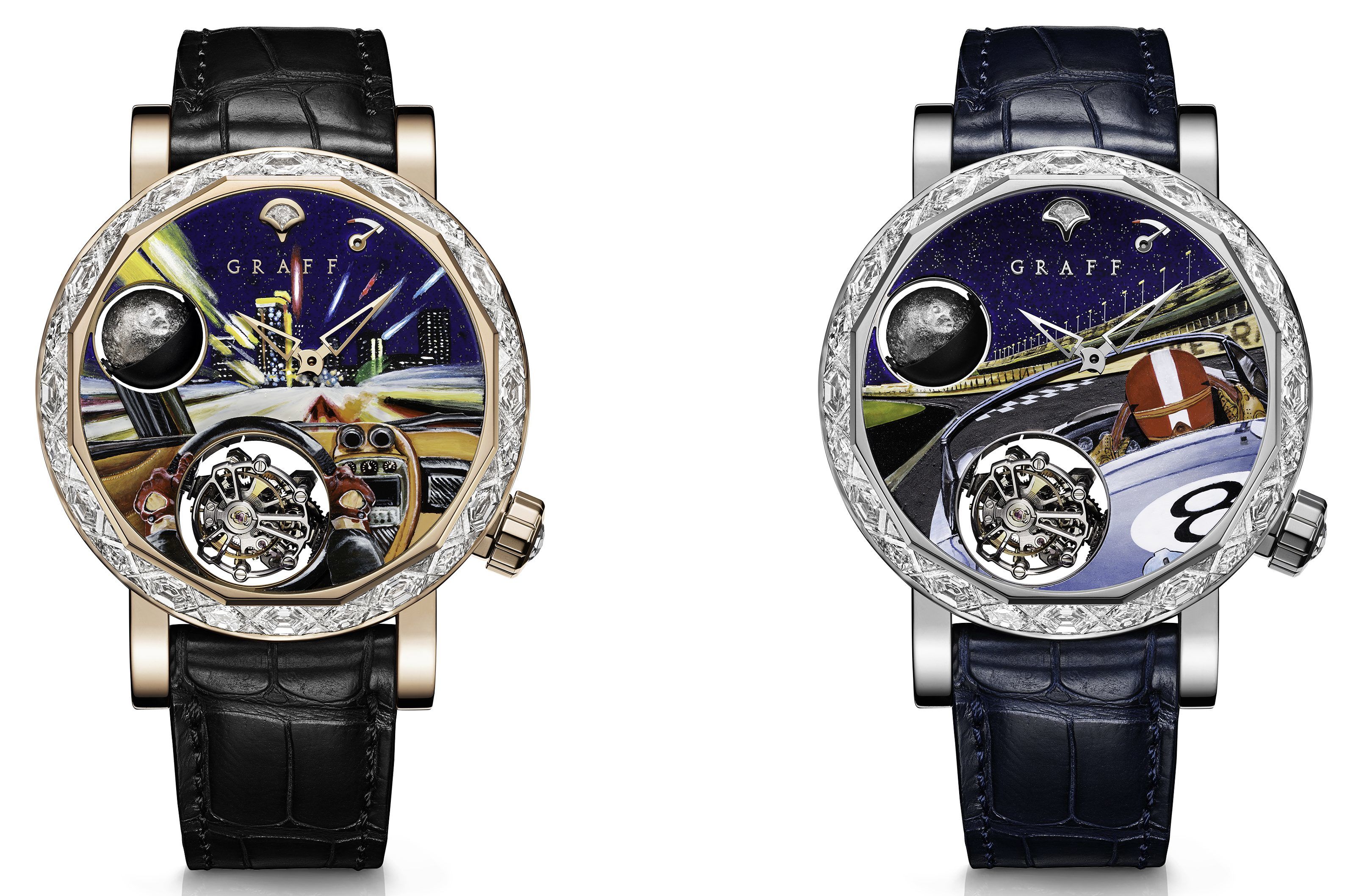 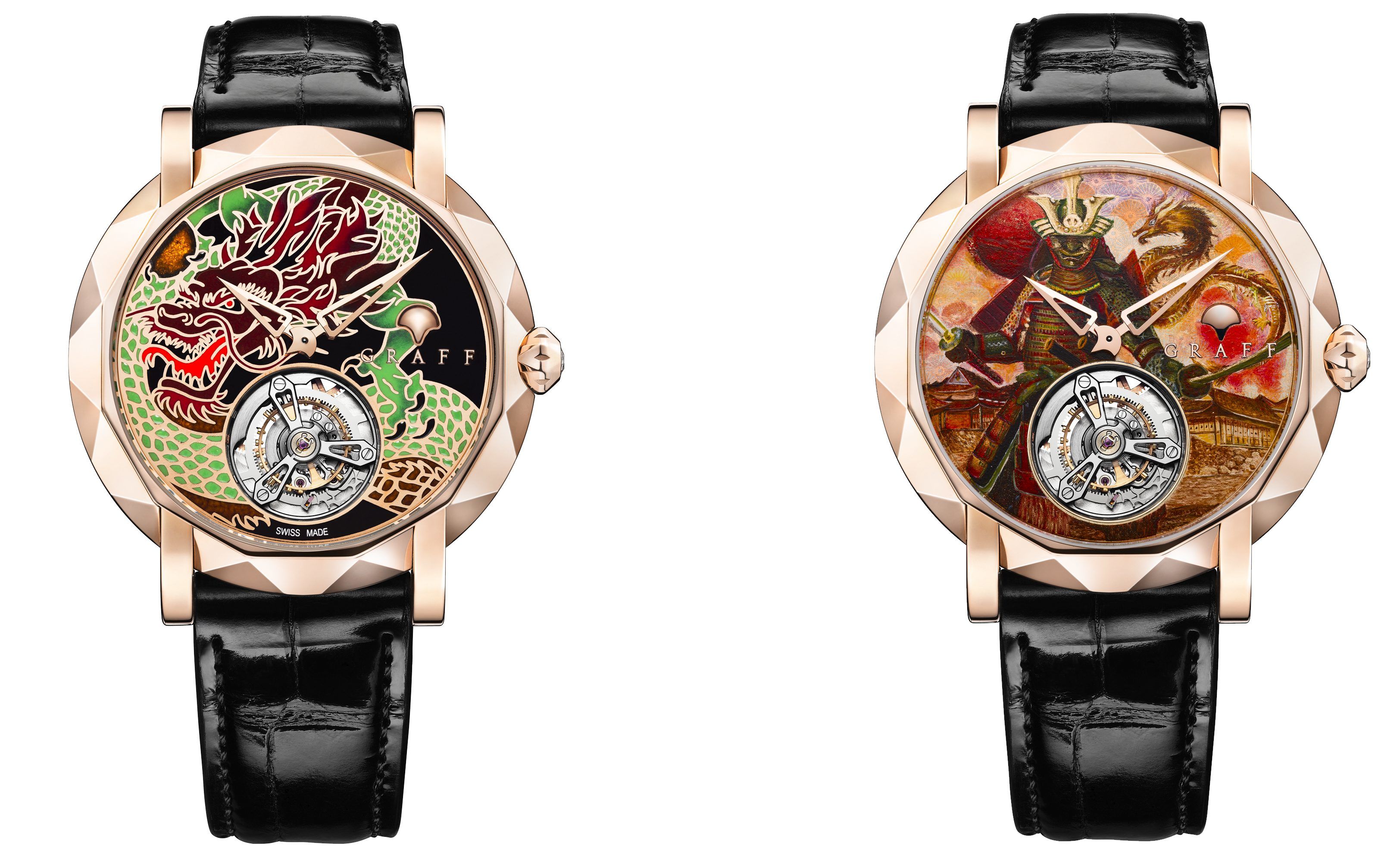 MasterGraff Ultra Flat Tourbillon Dragon abd MasterGraff Ultra Flat Tourbillon Samurai Warrior[/caption] We visited Jacob&Co this year and it was very exciting – a sublime experience for any diamantaire enchanted by vitrines filled with eye-candy. They are champions at balancing exceptional materials with astute engineering. At Baselworld 2018 the brand unveiled the Twin Turbo Furious and we had the opportunity to look at it up-close. This new model, which is an extension of the brand’s celebrated “Twin Turbo” line, captivates for design and technical complexity. Destined to be an iconic piece, it boasts with an intricate combination of a twin accelerated triple axis sequential tourbillon, a minute repeater and a monopusher chronograph. The tourbillons fly their courses at a rhythm of one rotation in 24 seconds on the first axis, in 8 seconds on the second, and in 30 seconds on the third pushing the boundaries of grand complications. [caption id="attachment_30271" align="alignnone" width="2029"] 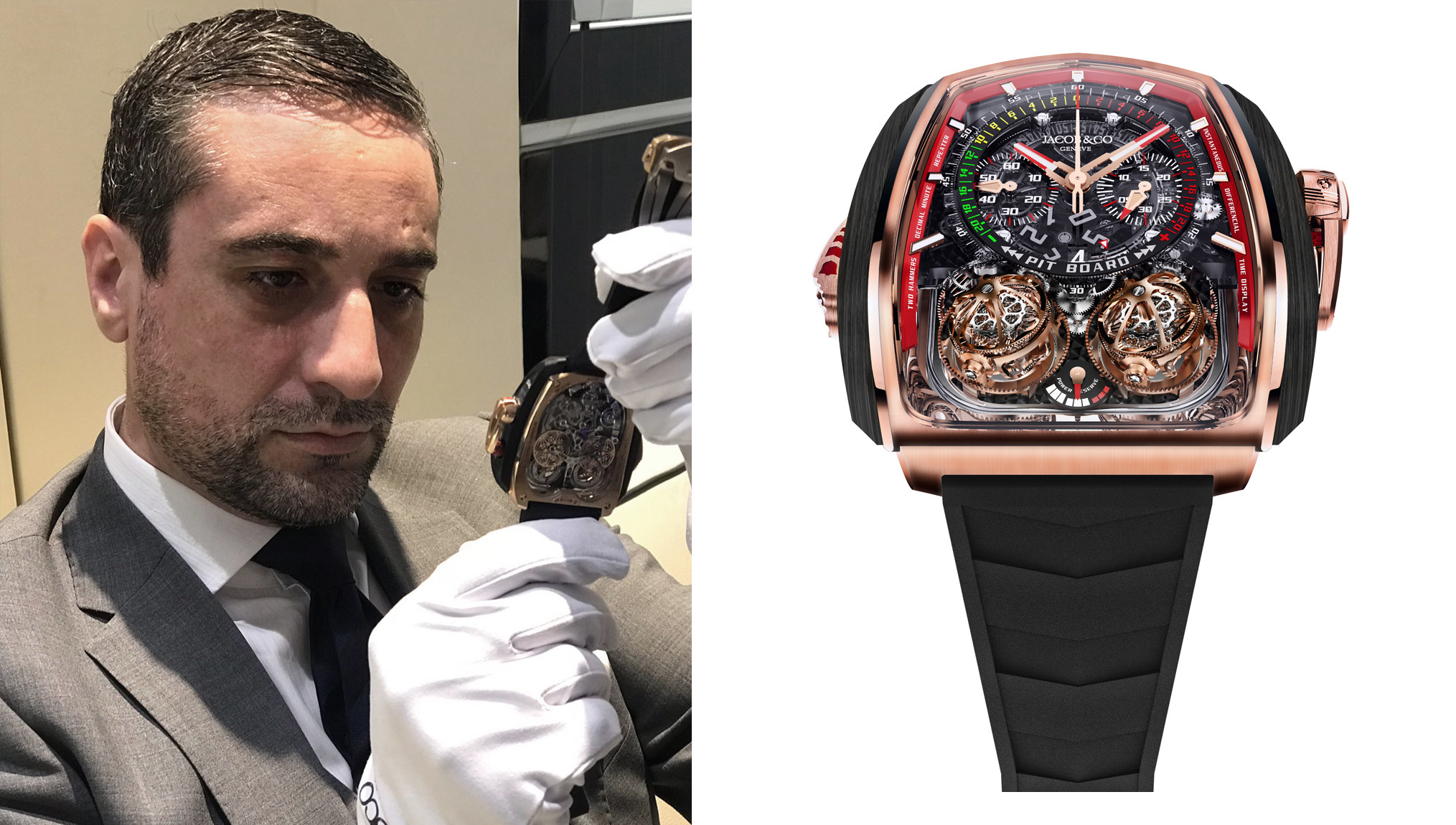 Antonio Cecere at Jacob&Co. Twin Turbo Furious[/caption] During our visit we also looked at the newly launched Astronomia Tourbillion Spider, a unique variation of this family, featuring a Titanium spider with real hair weighing in at 1.0 grams. Also launched at Baselworld 2018 is the Astronomia Tourbillion Gambler the grand complication timepiece encapsulates a miniature roulette wheel beneath the watch’s sapphire crystal dome case. The dial of the Astronomia Gambler features all 37 squares of a roulette wheel in green, red, and black enamel with mahogany inlays and the owner of the watch can select his/her lucky number amongst the 37 squares; Jacob & Co.’s master craftsmen then place a mother of pearl insert on the chosen number slot. [caption id="attachment_30275" align="alignnone" width="2646"]

Astronomia Tourbillion Spider and Astronomia Tourbillion Gambler[/caption] ML: In the Ladies’ category, which brand most impressed you for grand complication? AC: We spent some time at Jaquet Droz where the brand unveiled Tropical Bird Repeater, which celebrates the beauty of nature with its animated birds and other creatures. I had the opportunity to observe the enamel work on the dial at the microscope and that in itself was an extraordinary experience. The minute repeater, grand horological complication, enables the marking on demand of the hours, quarter hours and minutes via the vibration of cathedral gongs struck by hammers inside the case. The enamel work created by the maison’s artists brings to life the centre-located hand-carved hummingbird that mechanically moves towards a shrub of bright orange birds of paradise. A one-of-a-kind animation in watchmaking history, its wings beat up to forty times a second, adding incredible realism to the scene. To the right, a peacock with intense blue feathers veritably opens and closes its tail, while a toucan emerges from the palm leaves at 3 o’clock to open its beak. [caption id="attachment_30279" align="alignnone" width="2268"] 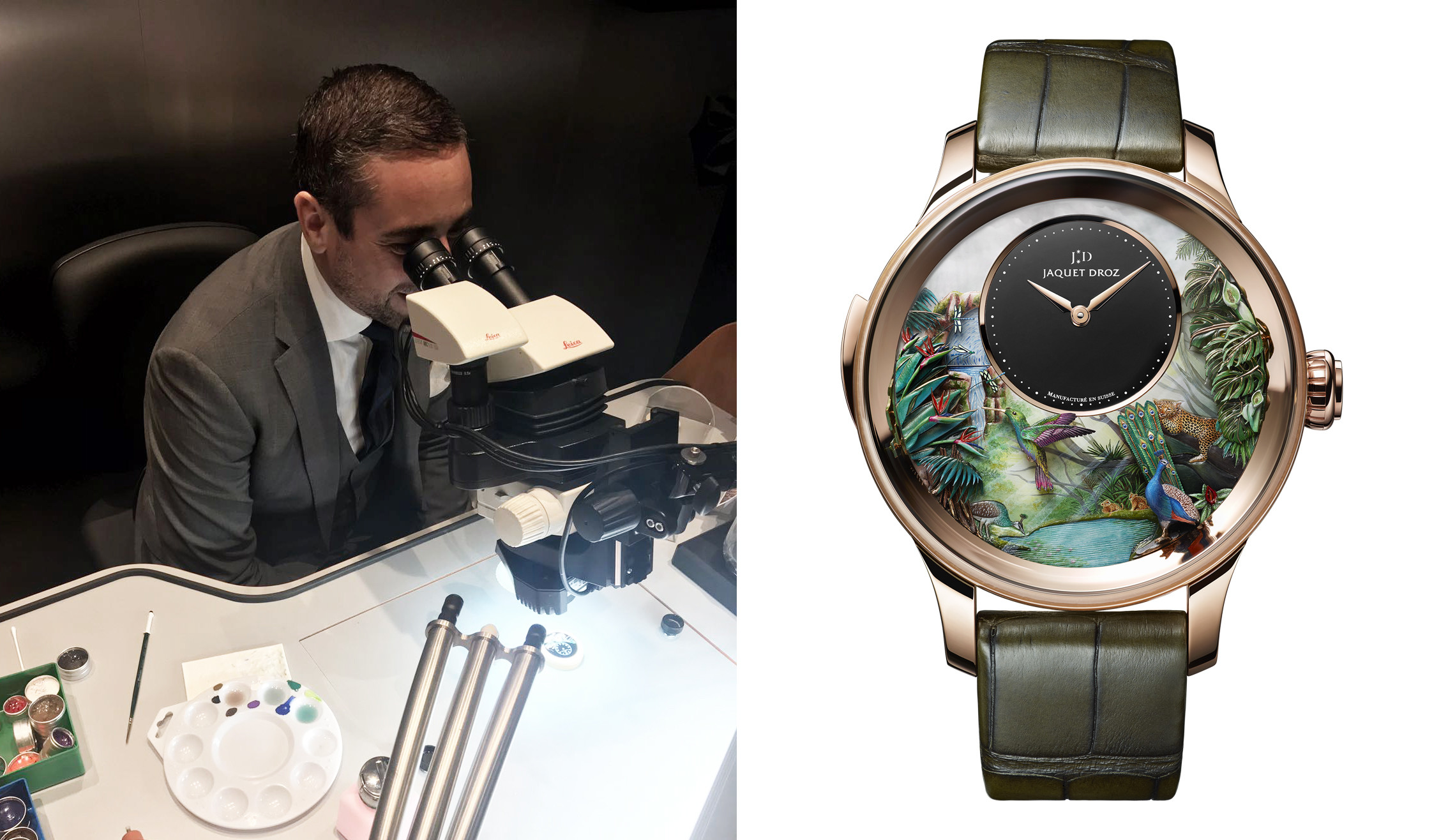 Antonio Cecere at Jaquet Droz. Tropical Bird Repeater[/caption] We enjoyed our visit at the Chanel VIP Lounge, a place that evokes all the brand values of the Parisian luxury house using darkness and plasma screens to convey its message; an emblematic post-box and a rack of postcards that invited attendants to write to their loved ones back home ensured that the brand’s romantic flair was kept intact. The main event hosted by Frédéric Grangié, CEO of Chanel Watches & Fine Jewellery was the launch of the third in-house movement, the Boy.Friend Skeleton Calibre 3 after their Calibre 2 won the Grand Prix d'Horlogerie de Genève (GPHG) in 2017. The new movement was fitted inside the Boy.Friend watch, originally launched in 2015, and finished in the Chanel exclusive beige gold. The octagonal case and the watch’s vertical alignment of black components in the centre give this timepiece an appeal across genders. [caption id="attachment_30277" align="alignnone" width="2525"] 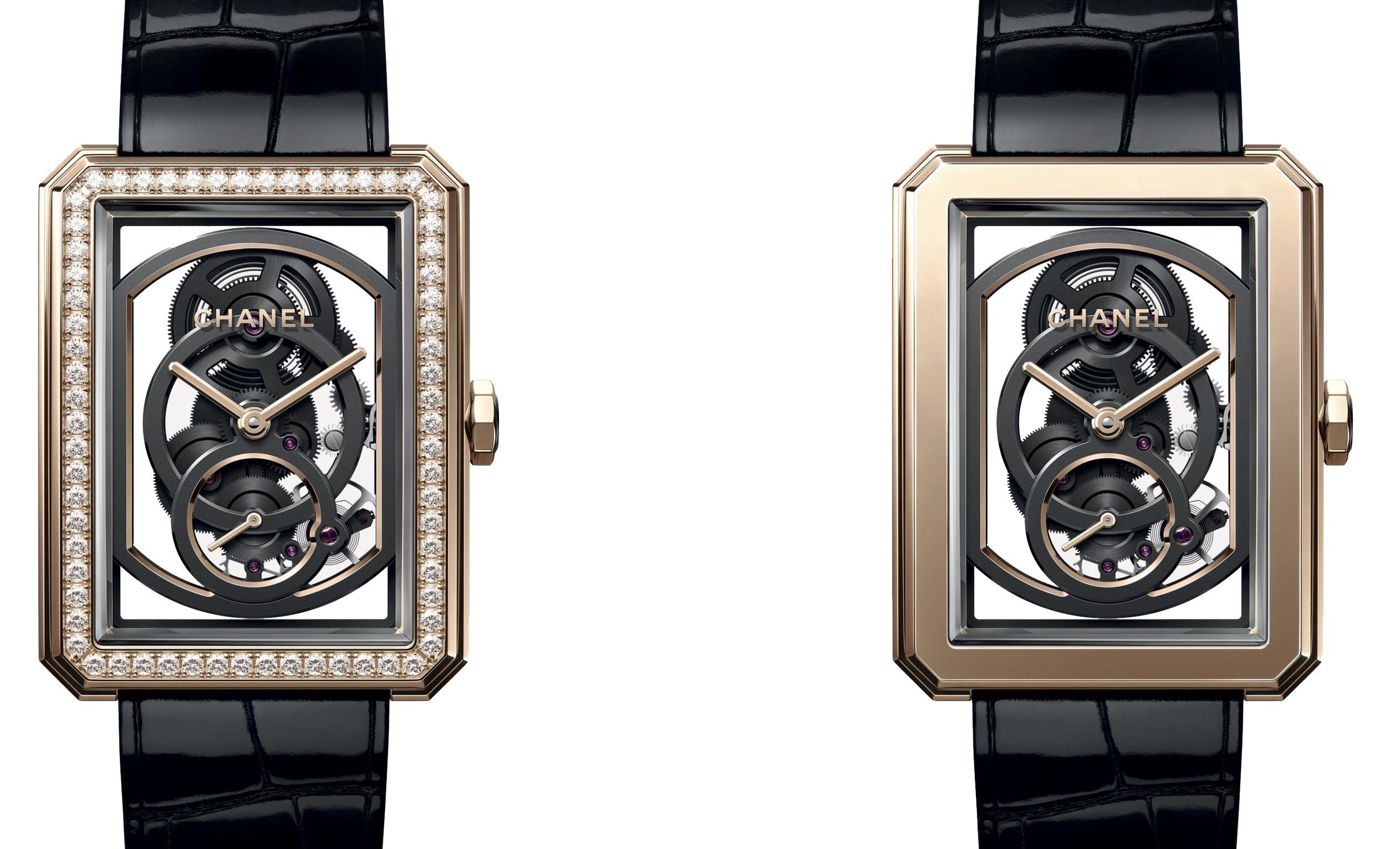 Boy-Friend Squelette Calibre 3[/caption] ML: We know there were some anniversaries in the watch sector. Which models were most celebrated? AC: De Grisogono has this year its 25th birthday and Fawaz Gruosi, Founder and Creative Director, celebrated at Baselworld with an inspirational exhibition that took attendees through the step of the creative process of this Geneva brand. In the watch category they celebrated the event with the launch of Allegra 25, a quartz timepiece with a woven gold ribbon on the bezel graced with delicately interlacing circles that deliver glimmers of light through tiny gaps and detailed with 29 colourless diamonds. They also launched the new Retro Double Jeu & Power Reserve, a quartz-based movement with a rotor that when performs a full rotation brings the dial to life by pivoting the stylised 3 and 9 o’clock Arabic numerals set with 62 diamonds to reveal different colours on the front and back. [caption id="attachment_30340" align="alignnone" width="1208"] 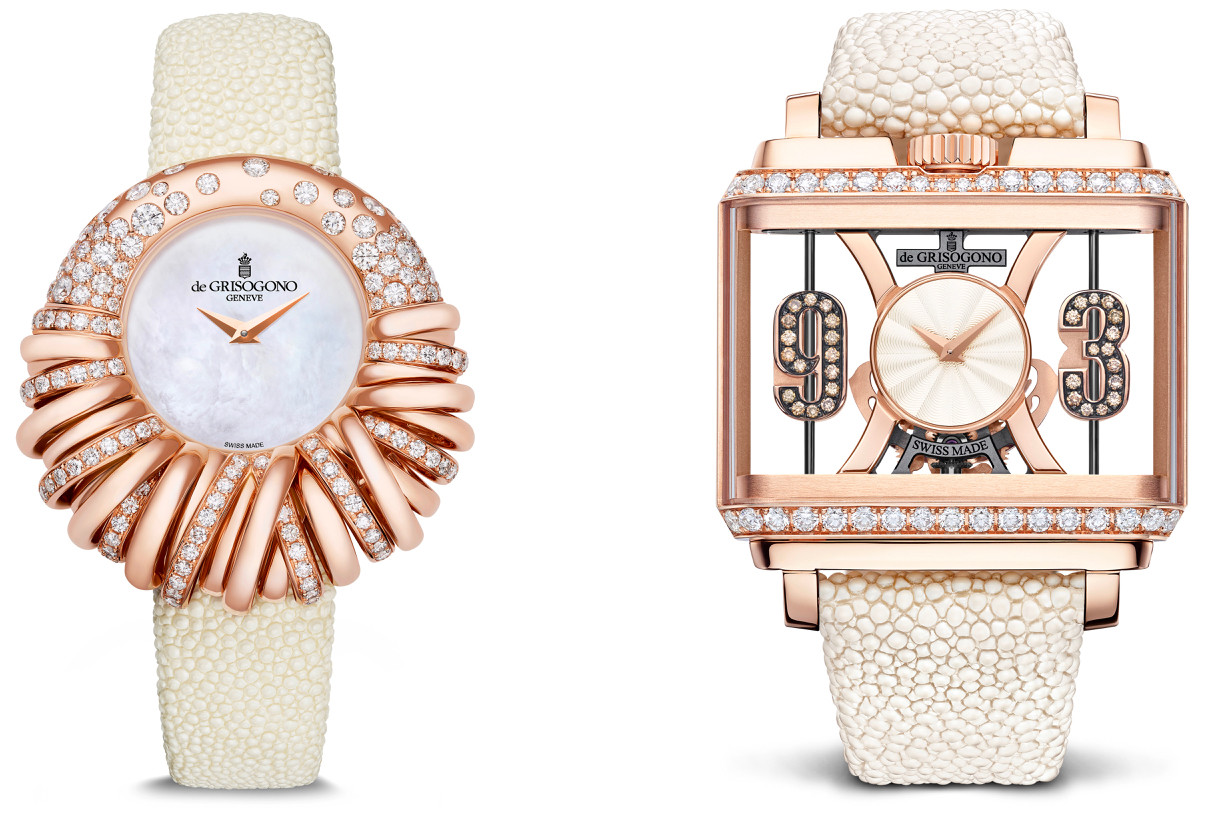 Allegra 25 and New Retro Double Jeu[/caption] Patek Philippe celebrated the 50th anniversary of Ellipse d’Or, an iconic watch first designed in the 1960s and unveiled in 1968; the anniversary model is released in a limited edition of 100 pieces, the dial is detailed with a floral motif and mounts a Calibre 240 – an extra slim self-winding calibre set in platinum to ensure a shallow profile. A perpetual Calendar makes its first appearance in the Patek Philippe Nautilus with a PVD blue dial and a new-patented clasp; it is 8.42mm thick -the thinnest perpetual calendar across Patek Philippe collections. Also presented was the Chronograph Perpetual Calendar Ref. 5270P-001 in platinum with a distinctively retro salmon colored dial mounting a manual movement originally launched in 2009. [caption id="attachment_30280" align="alignnone" width="1876"] 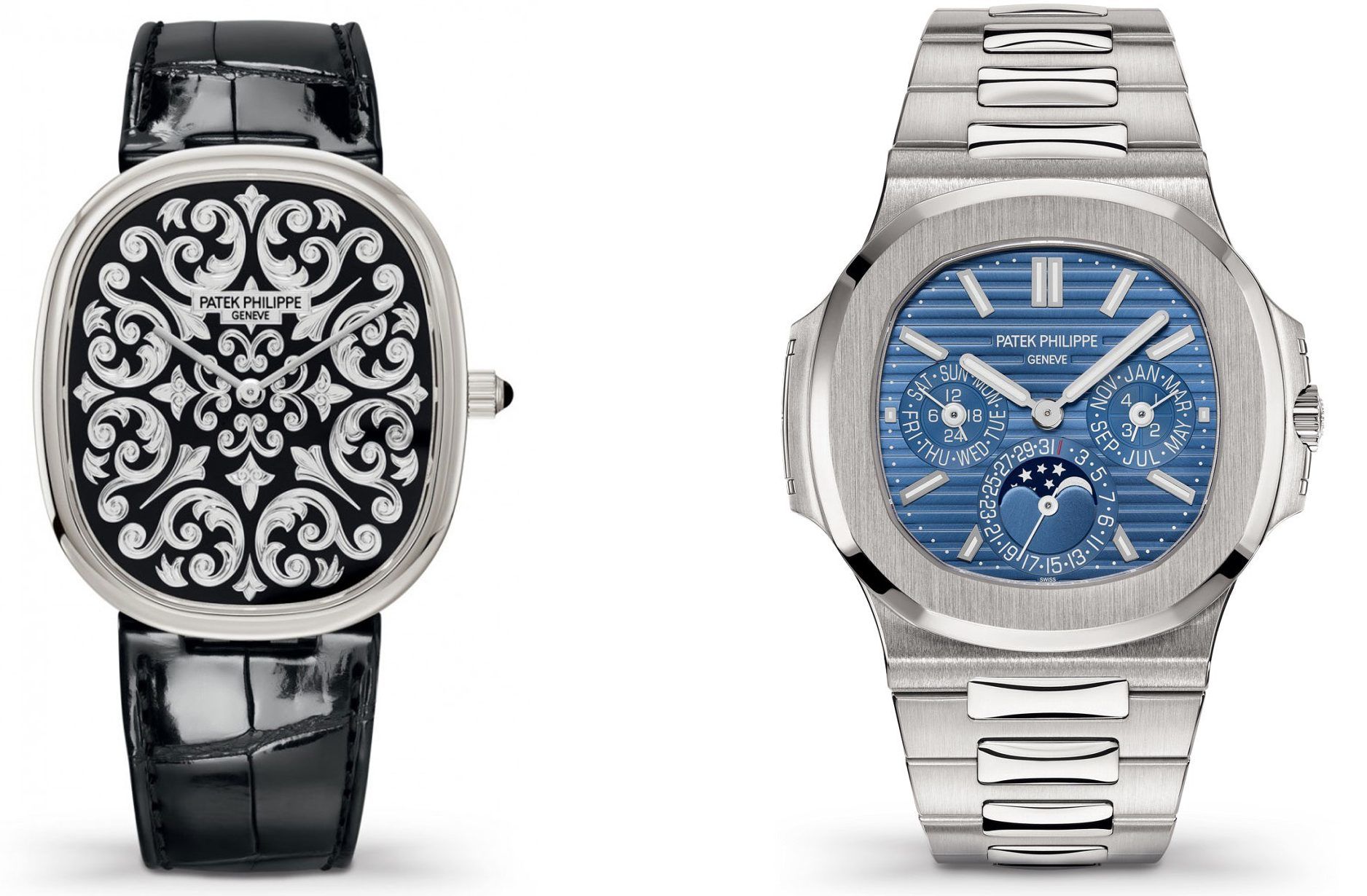 Ellipse d’Or and Nautilus Perpetual Calendar[/caption] Chopard also had an anniversary and celebrated 25 years of the iconic Happy Sport with a new edition with a mother-of-pearl dial in delicate pastel hues and a new high-performance self-winding manufacture calibre. [caption id="attachment_30321" align="alignnone" width="791"] 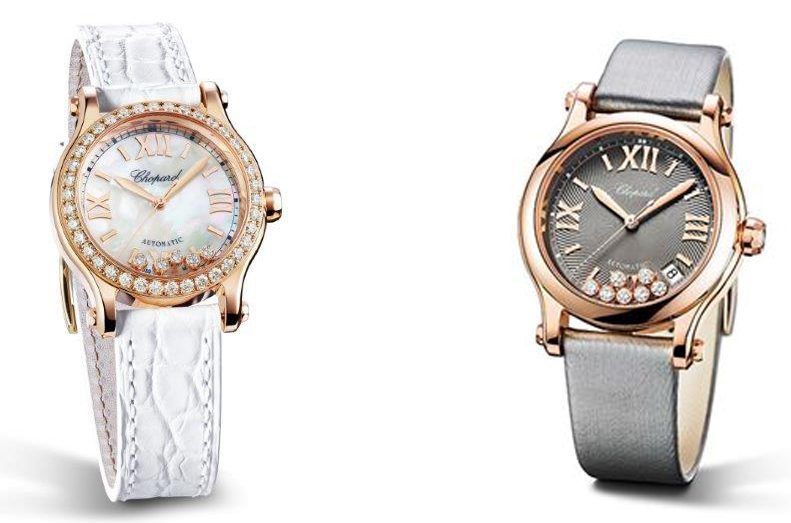 Happy Sport[/caption] TAG Heuer celebrated the 55th anniversary of the iconic Heuer Carrera model and it was announced that the Carrera Chronograph Tourbillon Chronometer as well as the Carrera Chronograph GMT certified “Tête de Vipère”, the prestigious stamp of excellence awarded by the Besançon Observatory. [caption id="attachment_30281" align="alignnone" width="4058"] 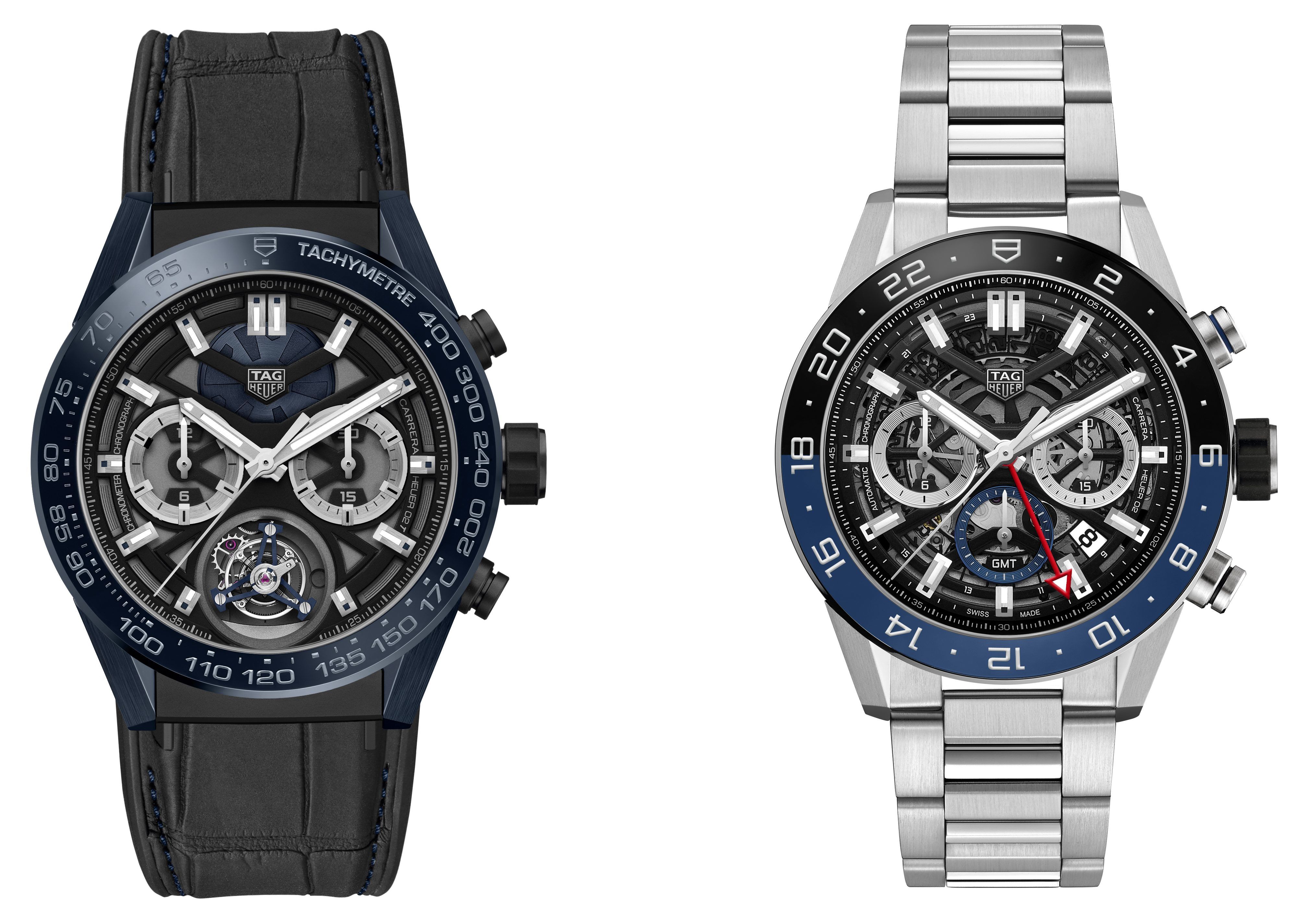 Carrera Chronograph Tourbillon Chronometer and Carrera Chronograph GMT[/caption] ML: Any other watches with significant makeovers? AC: TAG Heuer teamed up with Bamford Watch Department, pioneers in the customisation of luxury watches, and unveiled a brand new interpretation of its iconic Monaco. The new Monaco Bamford has a solid carbon case, an elegant full black dial and aqua blue chronograph counters: the result is an ultra-modern visual identity that renders this a contemporary classic. At the press launch, Jean-Claude Biver, CEO of Tag Heuer and President of LVMH Watch Division, met George Bamford CEO of Bamford to presented the watch. [caption id="attachment_30276" align="alignnone" width="1701"] 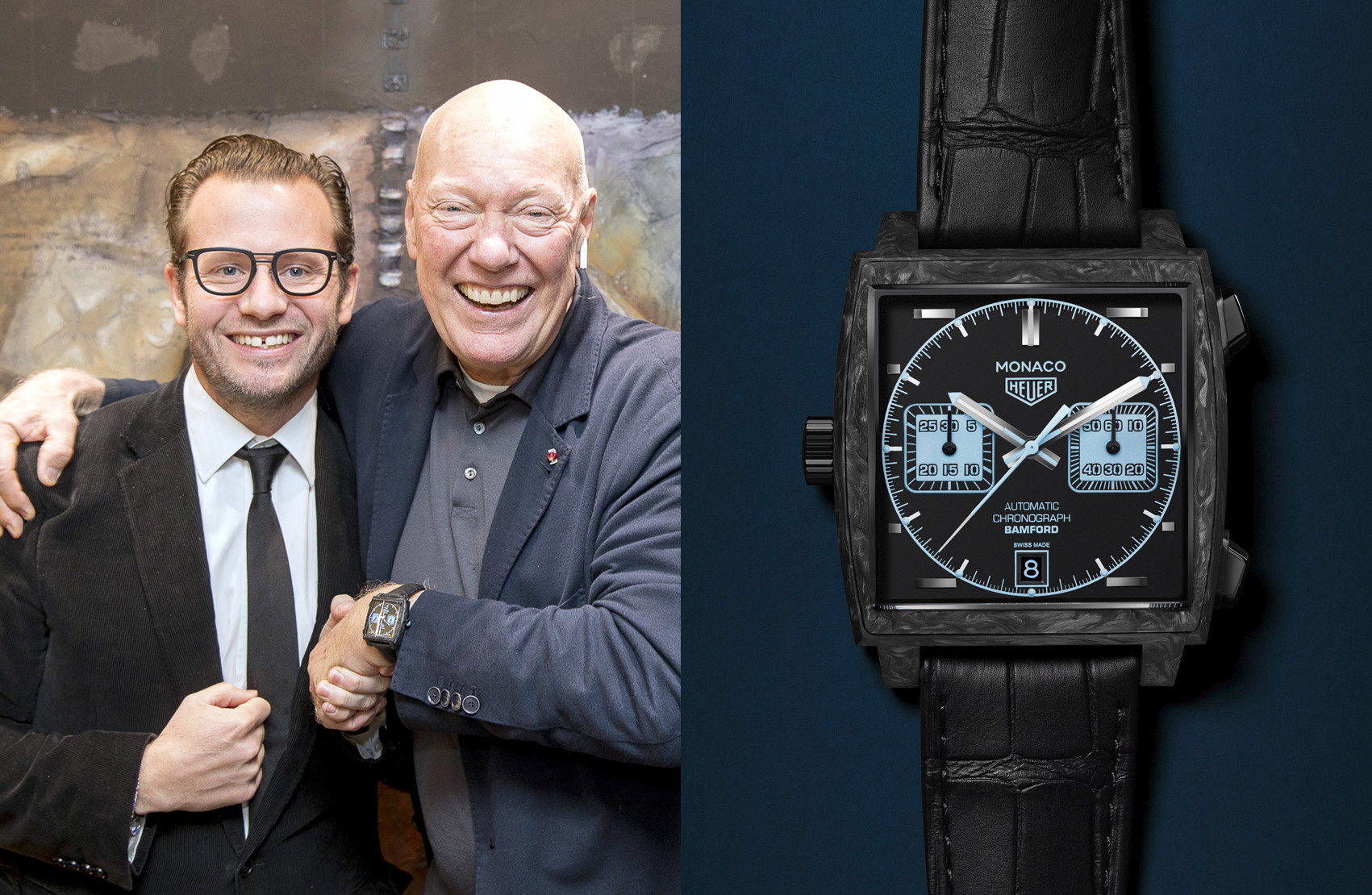 George Bamford and Jean-Claude Biver. Monaco Bamford[/caption] Rolex had some very exciting novelties this year: the GMT-Master II steel with a Jubilee bracelet and “Pepsi” colour coding in red and blue with 70 hours mechanical movement powered by the latest generation Rolex in-house movement; we have seen an extremely elegant new rose gold/steel brown and black GMT-Master II and a new Deep Sea with a reworked case and new bracelet. Also the Daytona had a new model launched with a graduation of sapphires in rainbow hues on the bezel and a black dial; 56 brilliant diamonds adorn the lungs and crown guard on Everose 18-karat gold with the self-winding calibre 4130. [caption id="attachment_30272" align="alignnone" width="2765"] 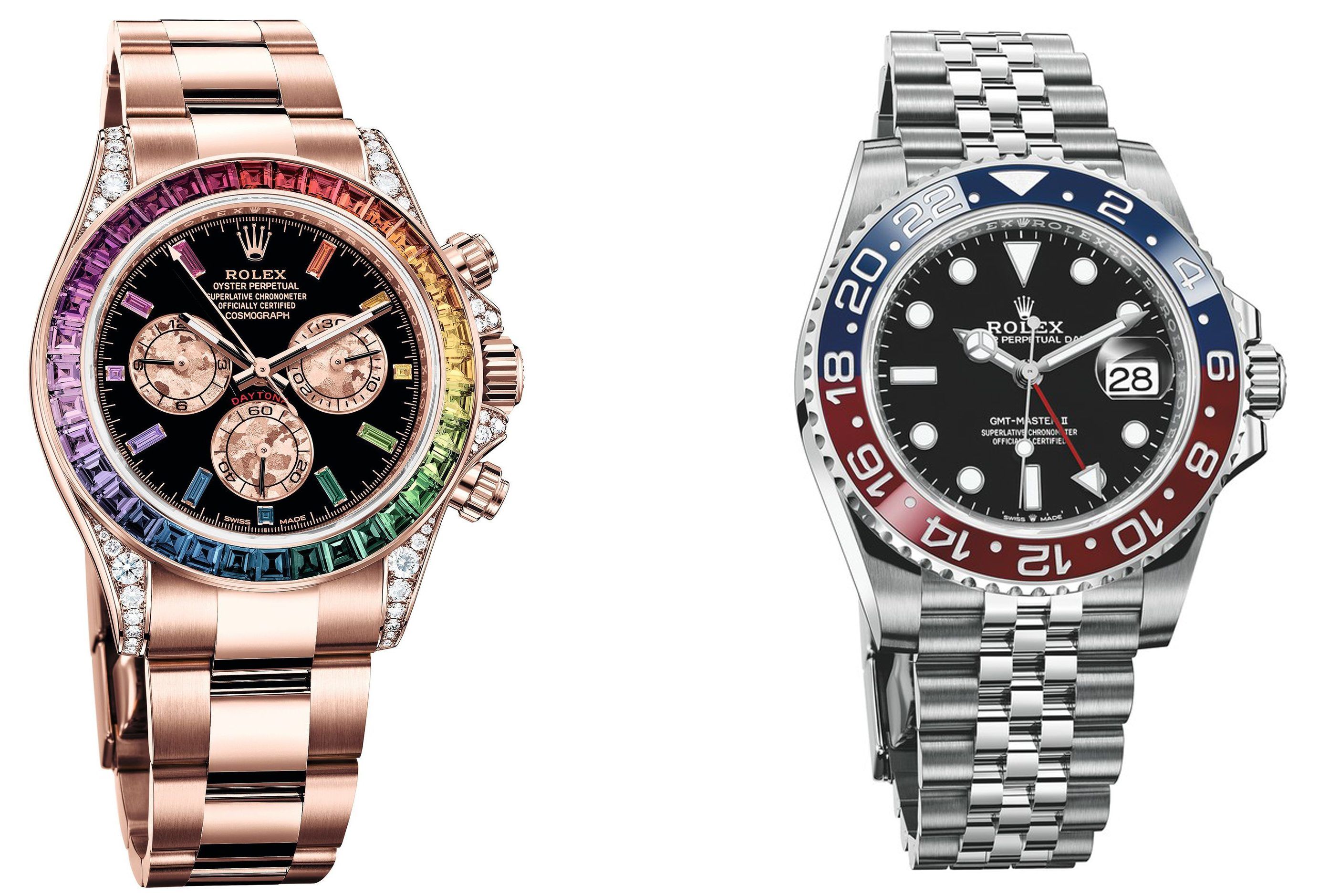 Daytona Rainbow and GMT-Master II[/caption] Hublot by creating a new material – the first vibrantly coloured ceramic – confirmed itself as a great innovator and launched a new version of the Big Bang: the Big Bang Unico Red Magic. Designed and produced in-house in the Hublot Research & Development department (and four years in the making), this invention has been patented both in terms of the material itself, and the manufacturing process. In addition to the vibrant colour it is also harder than conventional ceramics. [caption id="attachment_30322" align="alignnone" width="1600"] 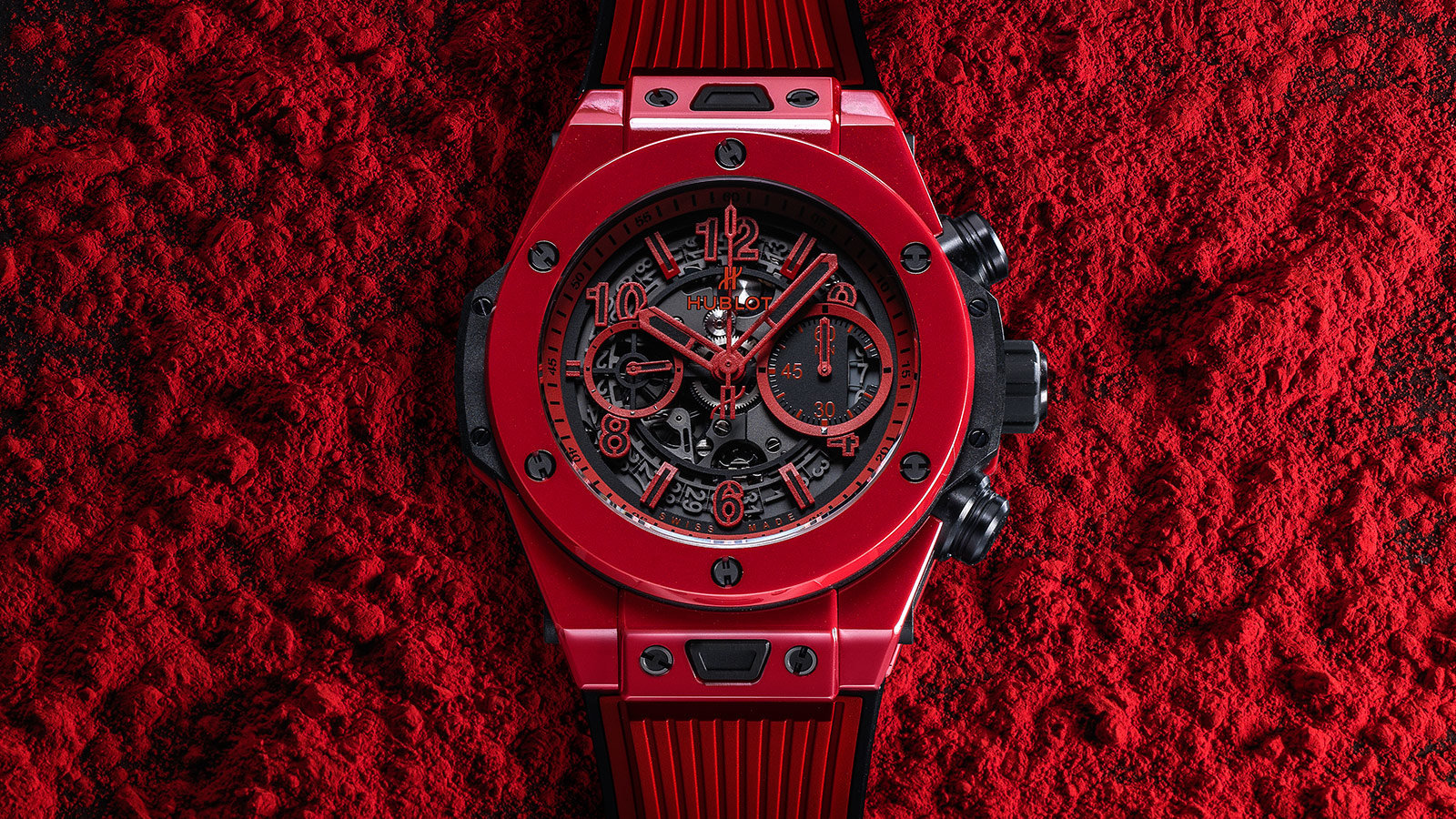