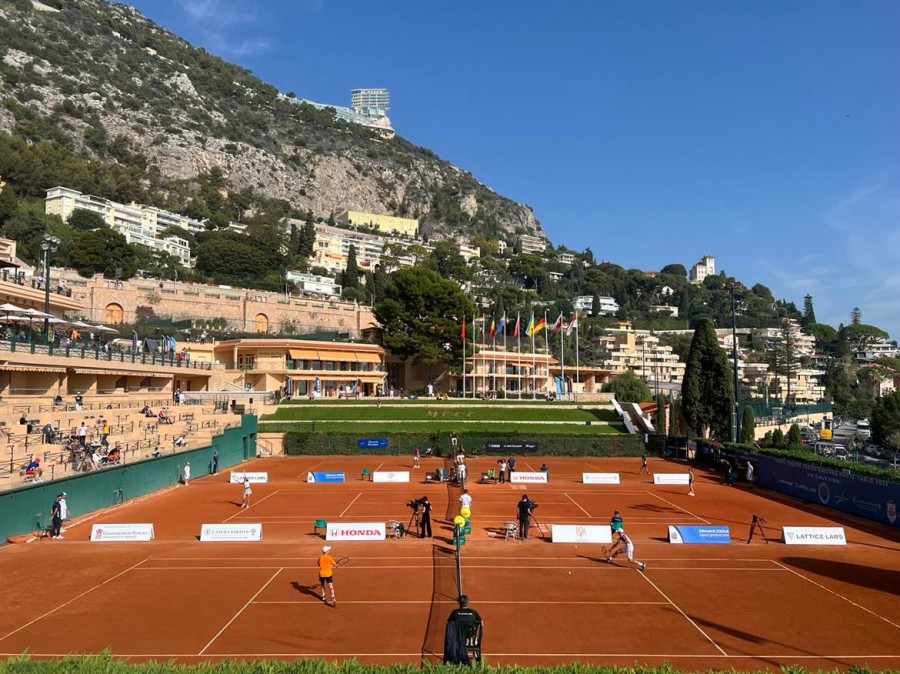 Junior champions were crowned on a packed day of tennis on the clay of the Monte-Carlo Country Club (MCCC) this Friday, although the tournament ended in disappointment for Monaco’s Lenny Petit.

Friday marked the end of a three-day event at the MCCC, which for only the second time gathered the brightest prospects of the sport for a tournament that marks the end of the season. The conditions were perfect for the crowning of the U14 and U16 champions in both the boys’ and girls’ categories.

Champions of today, and of tomorrow

The action got underway early on Court A. Ksenia Efremova, competing under a neutral flag, won the opening final of the day in the girls’ U14 tournament (6-4, 6-4).

All matches played on the main court were won in straight sets, but no performance was more dominant than that of German U14s prodigy Diego Dedura-Palomero. He was a class apart, showing strength and technical proficiency that went completely unmatched in all of his games. He swept Nikola Bilozertsev aside (6-0, 6-2) to claim his title and finish the season on a high.

The Czech Republic’s Alena Kovackova beat Romania’s Diana-Ionna Simionescu also in straight sets (6-4, 6-1). However, Kovackova didn’t have things all her own way. The first set looked to be wrapped up at 5-2, but an impressive comeback almost took the set to a deciding game, but Simionescu couldn’t take her final break point opportunities. Once her resistance was broken, the Czech athlete confidently and professionally killed the tie in the second set.

The final game on the main court was the Boys’ U16 final, contested by Norway’s Nicolai Budkov Kjaer and Sweden’s William Rejchtmann. The game was won by the former (6-4, 6-2). A tight first set gave way to one-way traffic in the second.

Speaking to Monaco Life post-match, Budkov Kjaer said, “[The match] was difficult. He is a very good player. I know and I practice with him a lot. I’m glad that I won. He played an unbelievable week, so I’m just happy that I won all of my matches.”

“Of course this year it was a goal for me and my team to reach the Masters, so I’m very happy that I came here. It’s an achievement just to be here. [Next year] I want to try and do well on the ITF. I want to move up the ITF rankings,” he continued.

Ultimately, the dream for all of the players competing in this second edition of the Junior Masters Monte-Carlo is to one day compete here at the Rolex Monte-Carlo Masters, which marks the beginning of the clay season.

“It is very far until we get there (Monte-Carlo Masters). Hopefully one day I will play here on the senior tour. We’ll see!” Budkov Kjaer told Monaco Life.

For the first time, a player representing the Principality competed in the competition. Having lost on the opening day, Petit then retired through a thigh injury in his final match on Friday. However, after a difficult, injury-hit season, Petit is already looking forward to next season.

“It was incredible [to compete here] with all the supporters and all the support that I had. To play here for Monaco is incredible. I’m a bit disappointed with the tournament I played,” Petit told Monaco Life.

However, playing against the bet in the world in his age category constitutes not only a great achievement but also a reference point for the level that he must reach. “It is true that the best in the world have qualified for this competition. I’m going to continue to give everything to progress further and reach my best level in the future,”

Like all players that represent Monaco, the biggest dream is to play in the Principality’s most prestigious tournament. “I need to progress and continue on my path. It is my dream to be able to play here in a few years [in the Monte-Carlo Masters],” admitted Petit.

In the short term, Petit is looking to have a strong campaign in 2023, telling Monaco Life, “My objective for next season is to have an ATP point and the most important thing is to just continue my progression.”

Should he continue to develop, there is no reason why Petit can’t return for the third edition of the prestigious tournament next year, and once again compete with the stars of tomorrow.