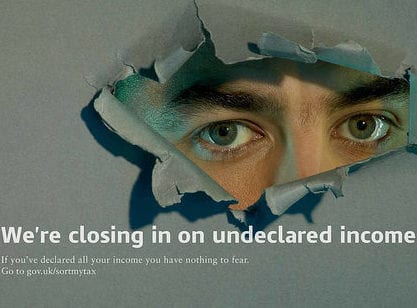 The UK’s tax collectors have new powers from January 1 to “name and shame” professional advisers who enable tax evasion.

Advisers will be liable for fines of up to 100 percent of the tax involved, or £3,000, whichever is higher, even if the firm’s Board or principals were unaware that subordinates gave faulty advice.

Financial secretary to the Treasury Jane Ellison said: “Tax evasion is a crime and as a government we have led reform of the international tax system to root it out. Closer to home we are creating a tax system where taxes are fair, competitive and paid.”

The MP explained that a “raft of measures have [been] introduced to tackle avoidance and evasion will create a level playing field for the vast majority of people and businesses who play fair and pay what is due”.

Professional such as accountants, tax advisers and lawyers will be waiting to see if the government tries to extend the new rules to include the giving of advice on tax minimisation that is perfectly legal. Once again, the spotlight will fall on the boundaries of tax evasion and tax avoidance.

Also from January 1, UK taxpayers are required to correct past tax evasion. The deadline is September 30, 2018.

Business & Finance Cassandra Tanti - January 27, 2020
After a busy two weeks of quarterly corporate earnings data, this week has some key economic data points to watch out for.