Trabzon: A city that lives and breathes football

Trabzon: A city that lives and breathes football 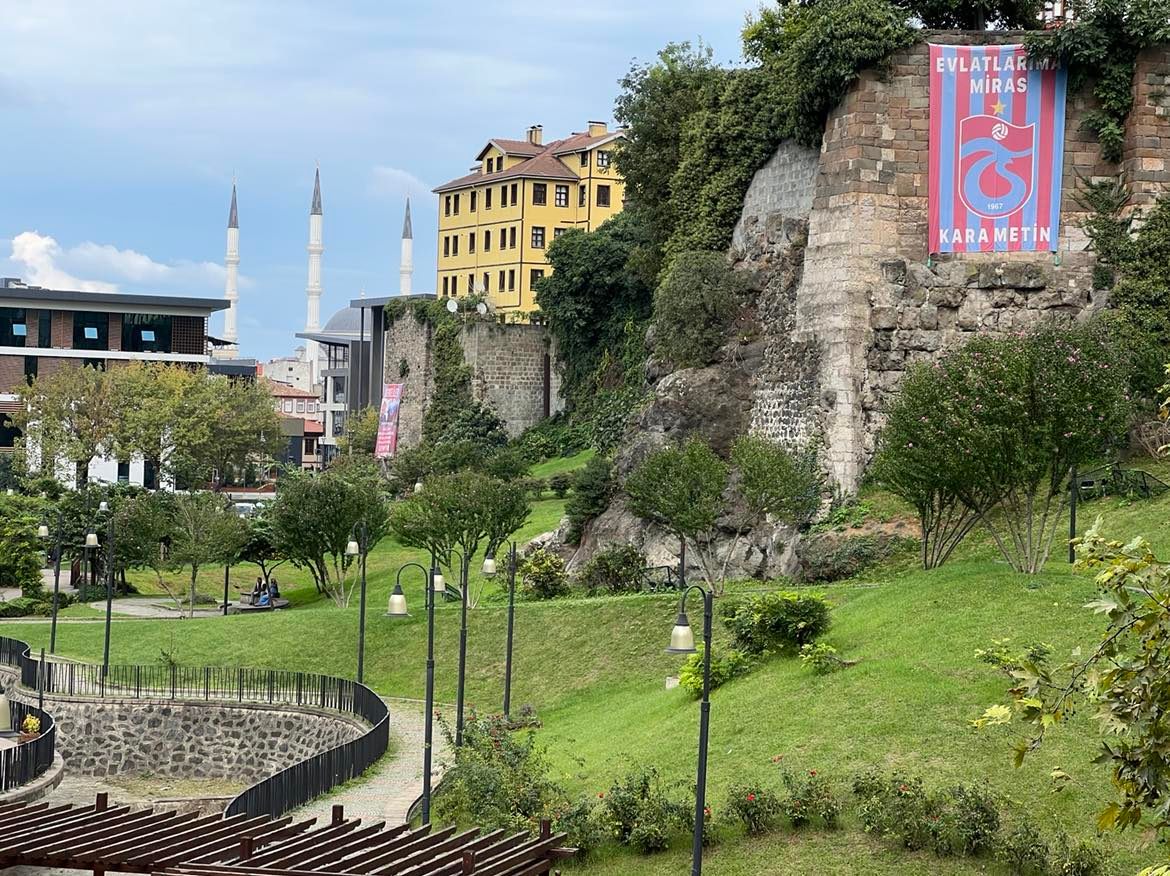 Monaco Life travelled with the AS Monaco squad for their Europa League tie against Trabzonspor last Thursday, allowing us to witness first-hand the fervour that grips this football-mad city on the Black Sea.

Arriving in Trabzon, you get the impression that so many of its 244,000 residents live vicariously through their team. The ubiquity of the club’s flag and its colours, which are also that of the city itself, are an unmistakable symbol of the importance of Trabzonspor.

By day, the suburbs of the Black Sea city is awash with serenity. Flags draped from any and (almost) every pitching post, from windows, from rooftops and from balconies, gently sway in the afternoon wind. The city is a complete architectural mish-mash, which is a metaphor for Trabzon itself.

Just 170km from Georgia and 288km from the Russian Black Sea resort of Sochi, one gets the impression of being not only near a physical border, but at a frontier of cultures and of ideologies. My visit to the city of Trabzon, a city that lies on the Silk Road, feels timely. Ahead of the Qatar World Cup, arguably the most divisive tournament in the history of the game, it is a reminder of the power of football to transcend difference. As football grapples with the impacts of globalisation, which inherently provokes tensions between, at the least different, and at worst incompatible values, Trabzonspor is a case in point. The magic of the city is in the ability of its club to act as a unifying force. In the words of Trabzonspor fan Yiğit Türk: “The city lives for football”.

During the daytime, that is felt most acutely in the centre of the city, where the traditional charm of the city meets a modernised, globalised world; it is a veritable nexus. Sights of household Western brands: McDonald’s, Burger King and ING shake you out of the trance that the city lulls you into in a moment of psychological dissonance.

Even in the early afternoon, there is an unmistakable sense of calm before the storm. Wherever you look, there is a supporter donning the iconic claret and sky blue of Trabzonspor. In the central square, there is a statue of the club’s crest; an impressive, five-metre tall mural depicting a fishing boat in storm, an image emblematic of this Black Sea port city, below the club’s crest; and the club’s boutique. The central location of the elements are an unmistakable metaphor for the spiritual position that the club holds in the hearts of its residents.

Despite the language barrier being particularly pronounced throughout the visit, the language of football is seemingly transcendental. In the club boutique, with very few words the employees convey an unfavourable evaluation of the club’s season so far: “Very bad, very bad”.

After winning the Turkish Süper Lig for the eighth time last season, and the first time in 38 years, Tranzonspor currently languish in fifth. Whilst the club have secured some impressive results, they have struggled to find a level of consistency this term under coach Abdullah Avci.

Such is the fervour for the club, the passion can often oscillate. In times of fruition, a Trabzonspor match is the hottest ticket in town. However, Trabzonspor are not living in such a moment, and during such periods, fans speak with their feet. We’re told that only 26,000 fans will be in attendance at the 40,000-capacity Medical Park Stadium, the club’s form is certainly a factor. But make no mistake, 26,000 Turkish fans are more than capable of creating a deafening atmosphere.

As is often the case in the modern game, the club has been delocalised from the city centre, and the new stadium is located on the outskirts of the city. Whilst the city’s mayor announced plans in 2021 to connect the stadium to the city centre with a sea-front tram line, the easiest way for now is to arrive by car, or by the constant procession of buses that file down the shore-side motorway.

These out-of-city stadiums often inhibit attendance – but not in Trabzon. The atmosphere builds early. By the time the players arrive on the coach, a sizable crowd has already gathered, and they are greeted by an impressive pyrotechnic display. There is such fanfare, such theatre around the match that it becomes easy to forget that 22 men will soon contest a match that is vital to the European aspirations of both teams.

The theatrics continue within the stadium pre-match. Tifos are unfurled, pre-game anthems are blared at full volume over the stadium tannoy, and conductors standing on tables within the stands dictate the tempo of this fervent crowd. The relentlessness, hecticness and vivacity of the composition is evocative of Vivaldi’s Presto, but unlike the short classical composition, this piece will last a full 90 minutes.

Like the swish of a baton the on-pitch conductor, the referee, instantaneously changes the atmosphere with the blowing of his whistle to signal the start of the match. The pre-match anthems give way to whistles, directed not only towards the Monaco players, who exercise a statistical dominance over their opponents for the first 25 minutes of the encounter, but also towards their own players. Every Trabzonspor mistake in possession is met with very audible disapproval, that reverberates around the stadium and echoes across the large expanse of the Black Sea, located just behind the stadium.

Whilst Trabzonspor can’t be described as having been abject in the opening minutes, they certainly weren’t imposing themselves on the tie. They sat behind Monaco by three points going into the tie. Defeat would have provided a huge blow to Avci’s side, potentially a fateful one for their aspirations of reaching the knockout stages, but that didn’t show. There was a nervousness and passivity to their game, which translated into the stands.

But in football, dominance doesn’t always translate into goals, and Monaco found that out the hard way in Thursday’s match. Another maxim of football is that dominance is fragile, and the momentum of any match can turn on the most innocuous of turning points. However, there was nothing innocuous about the way in which Trabzonspor took the lead.

Alexander Nübel’s misjudged pass out from the back struck Malang Sarr, who was retreating to provide a passing option. Before Nübel could even react, the ball was in the back of the net, and the crowd were revived.

Gone was the sterility and passivity in Trabzonspor’s game. Roared on by the 12th man, they pushed relentlessly in the minutes leading up to the break. Half-time didn’t derail Trabzonspor’s momentum as they went on to score a second, third and a fourth before the 70th minute. The game won, the home side took their foot off the accelerator. The fans entertained themselves with DIY light displays and a unique audio Mexican wave that flowed gradually across the stands.

The final whistle sounds at midnight, and heralds the Turkish victory that had long since been apparent; the on–pitch and off-pitch celebrations begin; the players dance in front of their fans in the centre circle, and the pre-match anthems are sung with even greater gusto. In a city whose mood seems so intrinsically linked to the fate of its football club, the taste of victory breathes life into the city. The claret and sky blue shirts disseminate throughout this sprawling port city, filling café’s and restaurants that remain open despite the hour.

To these pre-match and post-match rituals, there is a feeling of permanence, which is odd for a club founded only 55 years ago. Its creation has unified a city that now lives and breathes for Trabzonspor, and whilst they may breathe hot and cold, the fervour around this football-mad Turkish city feels immortal.