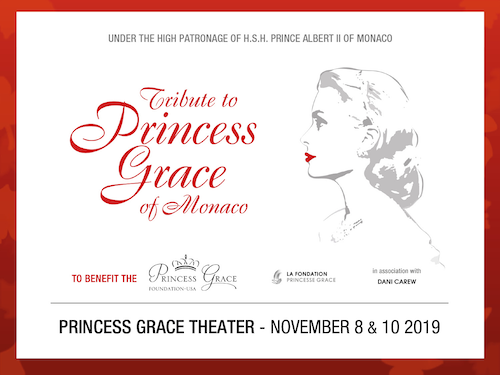 The Princess Grace Foundation-USA will be paying tribute to their namesake, Princess Grace of Monaco, during a special fundraising gala this November. The celebration will mark the 90th anniversary of the birth of the Hollywood icon and beloved Princess of Monaco.

Known throughout the world as a humanitarian, philanthropist, and artist, Princess Grace was committed to helping others. During her lifetime, Princess Grace of Monaco particularly helped emerging artists realise their career goals.

To carry on Princess Grace’s legacy, Prince Rainier III of Monaco established the Princess Grace Foundation-USA as a non-profit, publicly-supported charity, headquartered in New York. The Foundation’s mission is to assist emerging talent in theatre, dance and film by awarding scholarships, apprenticeships and fellowships to artists in America. To date, nearly 800 artists have received Princess Grace Awards, helping them to launch their creative careers.

With the support of the Princess Grace Foundation-USA, artists have thrived in their creative journeys. Many have gone on to achieve their industry’s most celebrated accolades including Tony Awards, Pulitzer Prizes, Emmy Awards, Bessie Awards, MacArthur ‘Genius’ Awards, and Golden Globe Awards.

On Sunday 10th November, a special screening of The Swan starring Grace Kelly will take place at 6pm at the Princess Grace Theatre, followed by a gala dinner at the Fairmont Hotel with an auction benefitting the Prince Grace Foundation-USA, during which two works of art by Toby Wright and Carol Bruton will go under the hammer.