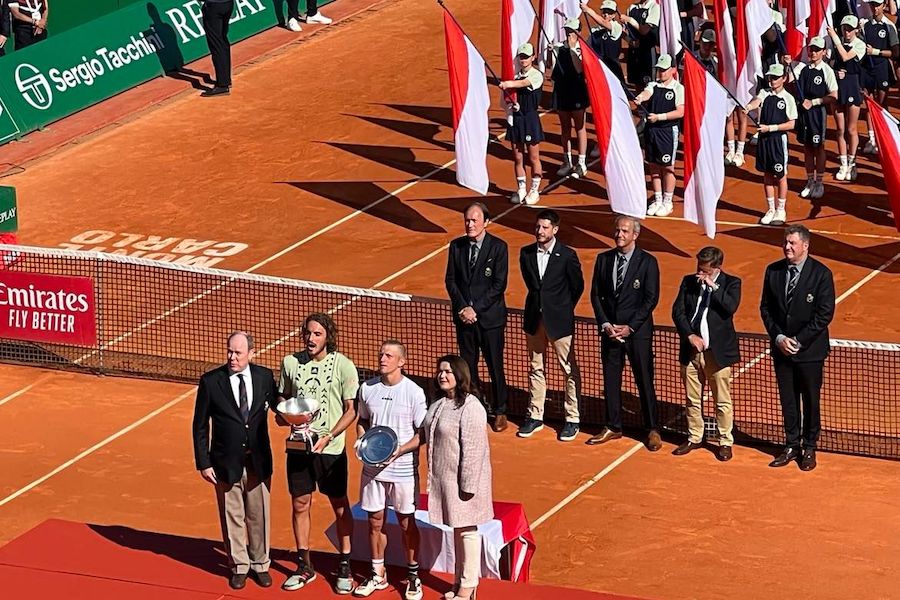 Just like last year, Tsitsipas prevailed in straight sets, but the Greek world number 5 didn’t have things all his own way, as Fokina profited from his under-dog status to launch an assault on Tsitsipas’ serve early-on.

The defending champion was sloppy in the first game, double-faulting before eventually holding. Fokina then broke on his next service game, taking his first break point of the match; the clay specialist looked right at home in his first Masters 1000 final.

That awoke Tsitsipas, who immediately broke back, in just one of several momentum shifts within this match. The Greek player was gifted another break of serve in the eighth game through two sloppy, long forehands, before holding serve to see out the first set (6-3).

Fokina’s resolve looked to have been broken, but he had the crowd on his side. Buoyed on by cheers of “Fokky”, which reverberated around the stands between each point won, he struck back in Tsitsipas’ second service game.

An enthralling ninth game looked to have decided the game in Tsitsipas’ favour. Having saved two break points, Fokina ceded the advantage twice, before gifting his opponent the chance to serve for the match.

Fokina, however, doesn’t know when he’s beaten and broke back to take the game to a tie-break. Tsitsipas had experience on his side, as well as the crowd, who he had gradually won throughout the set. Both would serve him well. Losing the first point, he then went on to win the next five. He had missed previous chances to kill the match, but he didn’t miss this one. The crowd gasped as a desperate flying Fokina back-hand landed agonisingly out, Tsitsipas, overcome with the moment fell to the floor, head-in hands, disbelieving of having defended his crown.

Tsitsipas is the first to defend his title at the MCCC since Rafael Nadal won three consecutive Monte-Carlo Masters between 2016 and 2018. Post-match, he admitted how much it meant to him.

“It’s a great feeling, because we had the crowd this year involved. It was a bit more lively than last year. I think it’s doubly special in a lot of ways.”

Prior to Tsitsipas’ triumph, Joe Salisbury and Rajeev Ram took home the first title of the day, beating Colombians Robert Farah and Juan Sebastian Cabal 6-3, 3-6, 10-7. Only yesterday, British player Salisbury, and his American partner Ram came through an even tighter 10-point tie-break against Jamie Murray and Rohan Bopanna (11-9).

If there was any fatigue, it certainly didn’t show, as they immediately attacked on their opponent’s serve, but couldn’t convert either of their two break points. They didn’t make the same error in the seventh game of the first set, crucially breaking to take the upper hand.

Farah and Cabal almost broke back immediately, but a Salisbury ace to deny them was indicative of a duo that not only didn’t fold in the crucial moments, but excelled in them, showing why they are the number one ranked doubles pairing in the world.

Salisbury and Ram took the first set, but they wouldn’t have it all their own way in the second. Cabal and Farah had two break points in the fifth game, but converted neither, but they did get that all-elusive break in the ninth in comical circumstances.

Having missed their first two attempts, the third took a fortuitous, or not so fortuitous depending on your perspective, clip off the net, the ball hurtling into the groin of Ram, who needed a moment to catch his breath before continuing.

Despite being a break down, they almost saved the set at the last, denying three set points, before the fourth was taken with the help of a marginal line call.

Time and time again, the duo have been shown to thrive under pressure, which, alongside their superior ranking, gave them the upper-hand in the 10-point tie-break. After a tight start, Salisbury and Ram ran away with it, and although they stumbled on two of their championship points, no mistake was made with the third: a maiden Monte-Carlo Masters for the world’s finest double act.

Following the cancellation of the 2020 Monte-Carlo Masters and the 2021 edition being held behind closed doors, the conditions for the return of fans couldn’t have been more perfect, whilst it was a fitting way to commemorate Zeljko Franulovic’s final year as tournament director.

In the role for the past 17 years, Sunday marked his final day as he received a shield in recognition of his work from Prince Albert II, who attended the event having recently recovered from Covid, and Melanie Antoinette de Massy, President of the Monaco Tennis Federation.

For the final edition of his tenure, he was delighted to welcome back fans. “This year was unique, because we had the crowd coming back after two years of absence, and we were very pleased to see that we were sold out starting on Wednesday,” Franulovic began in a press conference on Sunday. “This year, we had a total of 132,500 spectators. Matches took place before a crowd and stands that were completely full, and also with very mild, nice spring weather.”

Despite the absence of big names such as Nadal and Roger Federer, and the unexpectedly early exit of Novak Djokovic at the hands of Sunday’s finalist Fokina, the quality of tennis has been befitting of the large crowds that accompanied it. “The spectators were thrilled all along the week by very tight matches, often with a very high intensity,” the Croat Franulovic continued.

Scintillating on-court action and packed grandstands under the spring Riviera sun, this year’s Monte-Carlo Masters will be remembered as the year that tennis truly returned to the Principality.