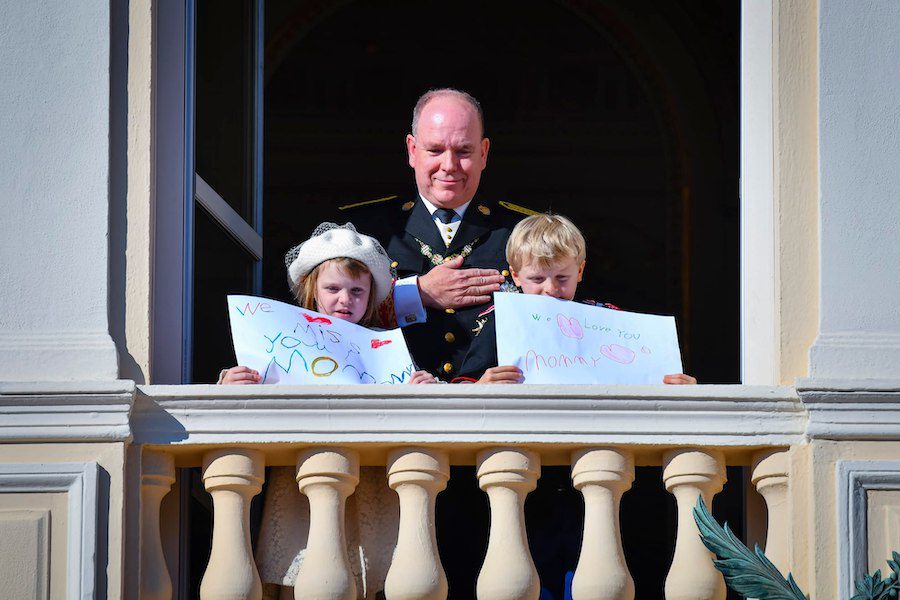 It was the tear-jerker moment of National Day celebrations, when twins Prince Jacques and Princess Gabriella held up signs from the Palace window saying “We miss you mommy” and “We love you mommy”, as Prince Albert put his hand to his heart.
It was always going to be a day of mixed emotions – a solemn mass at the Cathedral, the awarding of medals to service men and women, a celebration of 724 years of the House of Grimaldi.
But most poignantly, for the first time since their marriage 10 years ago, Princess Charlene was absent from National Day festivities this year in Monaco.
However, she was certainly not forgotten. About an hour after appearing in the Palace window alongside their father Prince Albert for the official military parade, six-year-old twins Prince Jacques and Princess Gabriella held up hand-drawn signs saying “We miss you mommy” and “We love you mommy”, complete with red love hearts. A smiling Prince Albert looked to the crowd for their reaction, then affectionately put his hand to his heart and signaled a kiss as the crowd cheered on in support of the family.
The Princess was due to appear alongside her husband and two children to mark the special day, but the Palace revealed earlier in the week that she needed more time to recover from her state of “deep general fatigue”, in a location outside of the Principality.
In an interview with People published on Friday, Prince Albert further revealed that Princess Charlene’s current state is the result “of several factors which are private matters.” He added, “she was clearly exhausted, physically and emotionally. She was overwhelmed and couldn’t face official duties, life in general or even family life.”
The Prince said that his wife had agreed that the best thing for her was to “have a rest and have a real medically framed treatment,” in a facility outside of Monaco for privacy reasons.


Earlier on National Day, Princess Gabriella and Prince Jacques, decked out in full military attire, embraced their public duties and stood alongside their aunts Caroline, Princess of Hanover, and Princess Stephanie as Prince Albert completed the traditional awarding of medals in the Palace courtyard.
Also present for National Day celebrations was the extended Princely family, including Pierre Casiraghi and his wife Beatrice, Louis Ducruet and his wife Marie, Pauline Ducruet and Camille Gottlieb.