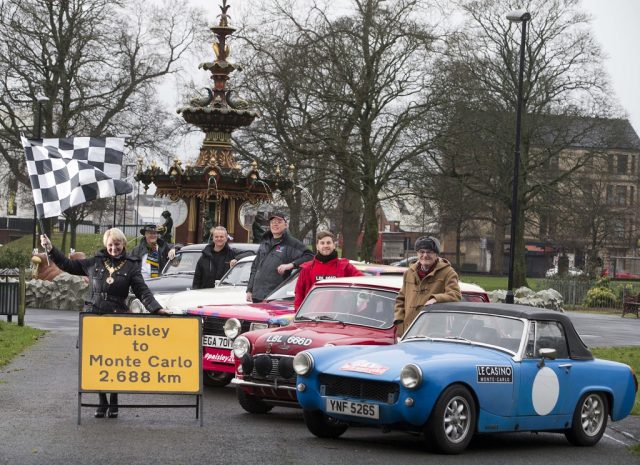 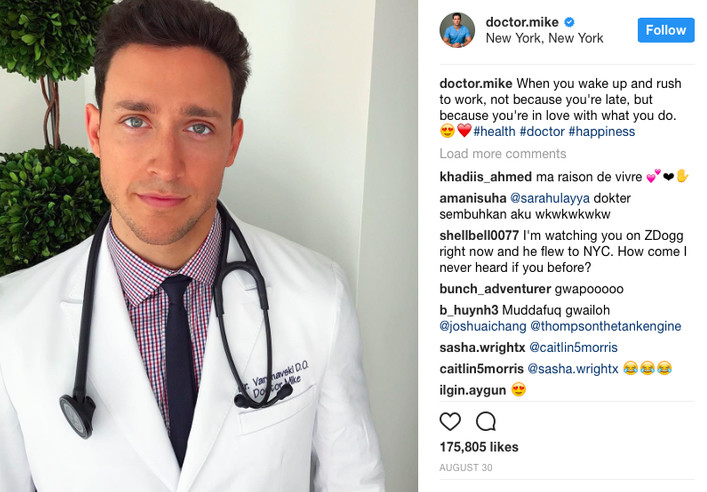 Photo: Instagram doctor.mike[/caption] In 2017, it’s rather hard to ignore the immense impact that social media has made on our culture. Stars are made overnight and careers crash and burn in 140 characters or less. Back in the early days of our online fascination with other people’s lives, a handsome young medical student named Mikhail Varshavski downloaded a photo-sharing app called Instagram and began to document his journey through medical school, his residency and, these days, his professional life in the medical world. Wanting to take away the mystery and sometimes stigma attached to a practitioner, Mikhail pulled back the curtains to show a more personal side of a doctor’s life, like photos of him attending fashion events or playing with his beloved husky Roxy … or his chiselled abs. Cute guy + cute dog + enviable social life … “Dr Mike”, as he was nicknamed in school, struck digital gold. Fast forward to 2015, when Dr Mike was in his residency Buzzfeed published an article extolling his extremely good looks and the media platform best known for its viral content was a catalyst for the social media storm to come once again. Overnight he became the Sexiest Doctor on Instagram with an account that skyrocketed to one million followers. In November of that same year, People Magazine named him “The Sexiest Doctor Alive”. Profiles followed in NY Magazine, Time, Coveteur and Mr Porter, and Dr Mike was hailed as the real-life version of Dr McDreamy on Grey’s Anatomy. But Dr Mike doesn't just sit around taking selfies all day. He’s gone on to launch his Limitless Tomorrow Foundation that financially supports deserving students who excel in and out of the classroom. To raise money, he partnered with a dating app to raffle off a date with himself. At $10 a ticket Dr Mike raised $91,000 (€79,000). As well, for the last two years, he’s lead a team in the Susan G Komen Greater NYC Race Against The Cure and produced and starred in a viral video to promote the race. In between appearing on TV shows like Dr Oz, Rachel Ray, and Good Morning America, plus acting as a chief medical host for a live televised Stand Up To Cancer event in the UK, Dr Mike travels around on speaking engagements at some of the most prominent universities, radio shows and healthcare conferences in the US. (He was a contestant on Who Wants To Be A Millionaire? with the intention of donating his winnings to the Susan G Komen Foundation). He’s good looking AND CHARITABLE? Can he get anymore perfect? The answer is yes. In true millennial form, he launched his YouTube Channel in April 2017 in order to engage other Millennials and initiate a conversation about health, lifestyle and medical issues in a tone that those born between 1983 and 2000 would respond well to. The unabashed social media promotion, however, is not everyone’s cup of tea. Some critics have labelled the good doctor as superficial or narcissistic, but this doesn’t phase "The Sexiest Doctor Alive", who with his combined following of 3.5 million has seen an increase in patients coming to him to educate themselves on preventative healthcare. In his words, “Selfies are catching cancers early. I never thought I’d be able to say that.” Dr Mike will be speaking at TEDxMonteCarlo on Saturday, November 11, at the Grimaldi Forum. Tickets available online. Article first published November 7, 2017.

Local News Cassandra Tanti - December 10, 2019
Prince Albert has joined a gathering of the entire Red Cross Movement in Geneva for a conference under the theme: ‘Acting today to shape the world of tomorrow’.