Venturi on the podium in Jakarta

Venturi on the podium in Jakarta 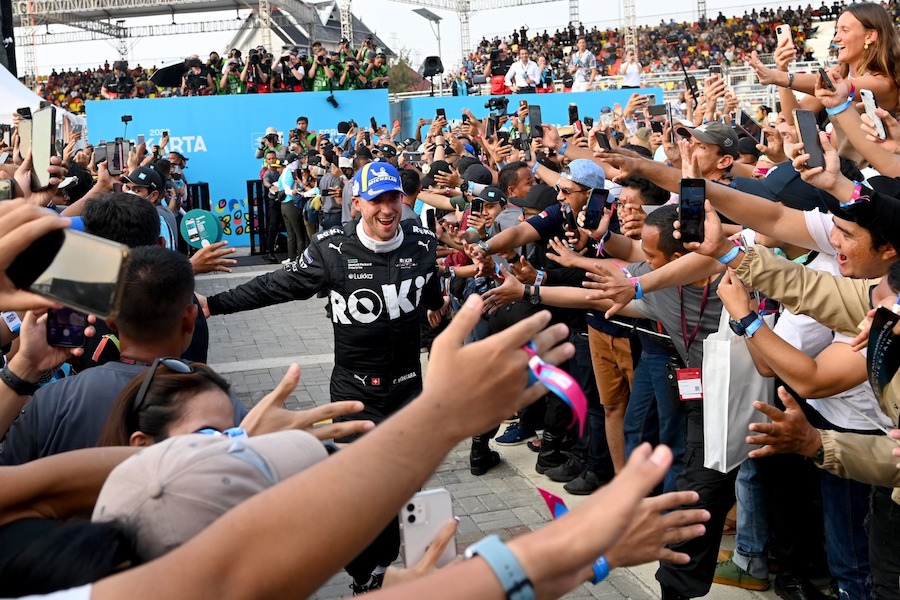 New Zealander Evans is now within just five-points of Venturi’s Mortara, who dropped below Jean-Eric Vergne in the standings. It could have all been very different, however, as fine margins decided the race.

For much of the race, it looked like it would be a two-horse race between Evans and Vergne, but as the latter failed to pass the former towards the end of the race, Mortara closed in, sensitive to the opportunity to better his third place.

Going into the final lap, the predator had turned prey as Vergne was forced to defend from the Venturi, taking the inside line into corners and hindering his attack on Evans. Vergne, and Evans, were grateful for the chequered flag. Less than a second separated the top-three, whilst there was only just over two-tenths of a second between Mortara and Vergne. Had there been another lap, Mortara likely would have picked off his prey.

Instead, he had to settle for the bottom step of the podium, which keeps him truly in the hunt for the championship, although for now, he has lost his second place. With only seven-points separating the top-three, Stoffel Vandoorne’s championship lead is anything but comfortable, and Mortara will fancy his chances of once again hitting the front when Formula E visits Morocco next month.

Lucas di Grassi meanwhile helped the side with a handful of points as he finished in seventh. However, in the Teams’ standings, Venturi lost their second place to DS Cheetah, who now lead the Monaco-based manufacturer by just one point, whilst the Mercedes EQ team are a further 16 points ahead.

Post-race, Venturi team principal Jérôme D’Ambrosio said, “A great race for us and Formula E in Jakarta today. With Edo on the podium in third and Lucas battling forward to seventh, we were able to take home a good haul of points.”

He continued, “The battle in both the Drivers’ and Teams’ World Championships is extremely close at the moment and with only four race weekends remaining this season, we need to maintain our current momentum. We’ll still be taking it on a race-by-race basis and as always, the goal is to do our best.”

With only a handful of points between the top-three in both the Teams’ and Drivers’ Championships, it is still all to play for as we enter the business end of the season.