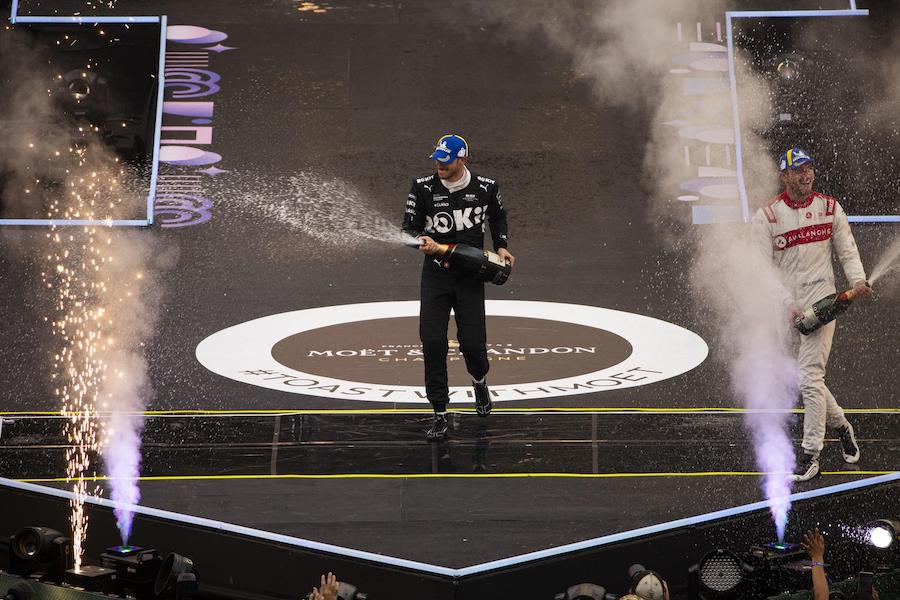 Edoardo Mortara won the final race of the Formula E season in Seoul on Sunday, but the result wasn’t enough to achieve overall victory in the drivers or constructors standings.

Winner of this year’s Monaco ePrix Stoffel Vandoorne wrapped up the title on the tight, windy streets of the South Korean capital. The Mercedes-EQ driver effectively ended the season as a contest during Saturday’s race. A fifth-place finish left Mitch Evans with too much ground to make up in Sunday’s finale, whilst a DNF from ROKiT Venturi’s Mortara definitively ended his title aspirations.

However, going into Sunday’s race, the constructors’ world title was still up for grabs. After a good qualifying, Mortara took the inside line into turn one to maintain second position despite a challenge from Jake Dennis.

Mortara, knowing that only a victory and a strong performance from teammate Lucas Di Grassi would suffice, made inroads into António Felix Da Costa’s lead in the early stages. He then made a daring move down the inside of the Portuguese driver, having dummied a move around the outside. He made the move stick, whilst Dennis also profited and moved up to second.

Monégasque manufacturer Venturi was given hope mid-race when Nyck De Vries had to pit because of a puncture. However, that hope was short-lived. Just a few laps later, Di Grassi dropped down to seventh and then to the side of the track as he too suffered a puncture. Following his enforced pit stop, he re-joined outside of the points and the title looked to have slipped away from Venturi.

However, going into the final race, it was never really in Venturi’s hands. A solid, points-scoring race from Vandoorne was all that was needed for him to wrap up the drivers’ title as well as the constructors’ title.

Vandoorne’s result was more than solid as he profited from errors by the drivers in front of him. Running in fourth, a collision between Da Costa and Dennis saw the former drop back through the field, whilst the latter was handed a time penalty. Vandoorne therefore moved up to second and in doing so secured the title.

Mortara’s victory in the final round was ultimately inconsequential, although it did secure him third place in the drivers’ standings. Venturi finished the season as vice-champions, finishing 29 points ahead of DS Techeetah in third, but 24 points behind champions Mercedes-EQ.

Reflecting on the season, Venturi team principal Jérôme d’Ambrosio said, “A victory for Edo is a fantastic way to end the season. I think this result reflects the performance we have shown throughout the year, but at the same time, there is a bittersweet feeling because it feels like we could have had more in the World Teams’ Championship. We fought until the very end.”

He continued, “Reflecting on our progression and evolution as a team over the past two years makes me very proud. I’m proud of every team member, of what we’ve achieved together and the trajectory that the team is on.”

Race winner Mortara echoed d’Ambrosio’s thoughts, adding that he’s “confident that the best is yet to come.” Having narrowly missed out, Venturi will want to build on this strong season, and go one better next year.