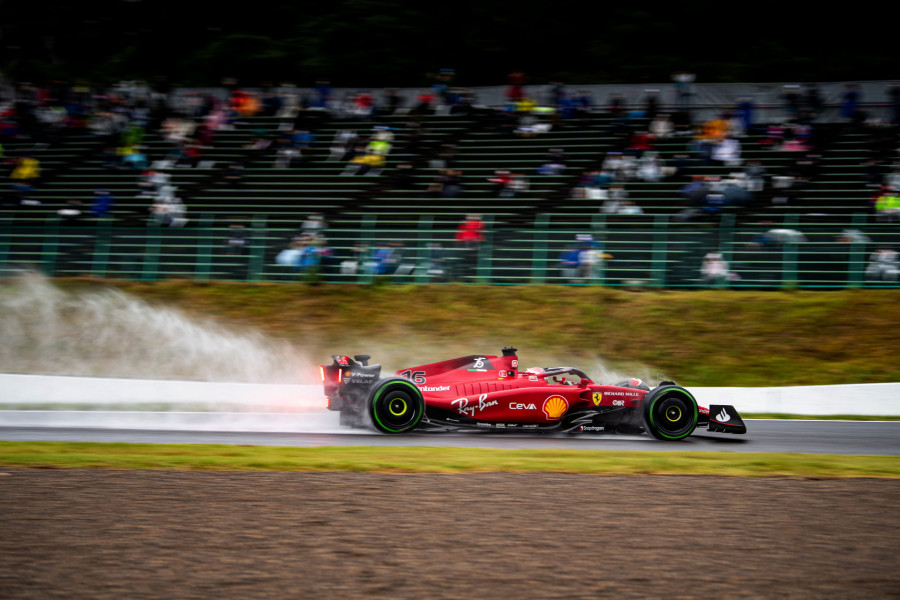 Emerging from the hazy spray, Max Verstappen took the chequered flag in Suzuka on Sunday, before later being crowned two-time World Champion in confusing circumstances.

Whilst visibility was an on-track issue throughout the shortened 40-minute sprint at the Japanese Grand Prix, seeking clarity off it was also difficult to come by.

The race was over, and Verstappen had comfortably won, but it was seemingly insufficient to see him crowned F1 World Champion at a circuit where he made his official debut eight years ago. However, that all changed during the post-race interviews.

Charles Leclerc, who was embroiled in a battle over second place with Verstappen’s teammate Sergio Perez, was forced into an error at the final chicane, on the final lap. Although he held position – just – he was quickly adjudged to have gained an advantage having completely cut the corner.

The five-second penalty saw Perez promoted to second. However, there was still one matter to conclusively resolve – the attribution of points. As the race didn’t run the whole race distance due to a two-hour rain delay, it was unclear as to whether full points would be awarded to the drivers.

In accordance with Article 57 of the regulations, as the race was restarted, full points were awarded, gifting Verstappen the title, but not until after an oddly underwhelming and confusing podium ceremony, just before which the Dutchman was filmed questioning whether he was in fact champion.

Post-race, Ferrari team principal Mattia Binotto said that he was also confused by the situation, adding that he didn’t think that full points would be awarded to the drivers.

The Grand Prix, the first to take place in Japan since the Covid pandemic, looked for a time as if it would conclude with just three laps of on-track action. Starting from second, Leclerc got a great launch in the sodden conditions, but Verstappen held first going around the outside of turn one.

Whilst the front two kept it clean, the same could not be said for the rest of the grid. Minor incidents littered the field: Sebastien Vettel collided with Fernando Alonso and Alexander Albon retired through a mechanical issue. However, a huge spin from Carlos Sainz, who struggled for grip in the difficult conditions, brought out the safety car on lap one.

As the rain intensified, the red flag was brought out, leading to a wait of over two hours before getting back underway. When the race did re-start, they did so under the rolling start procedure.

Verstappen immediately shot off into the distance and wasn’t seen again by the rest of the field. As he often has been this season, Verstappen was in a league of his own. There were battles all the way down the field, the most consequential of which was between Leclerc and Perez.

Leclerc’s defensive heroics were ultimately in vain as the title battle was officially ended by race control’s post-race decision. For some time, Leclerc’s task has been delaying the inevitable, but on Sunday the inevitable came into fruition. “Max’s title this year was just a matter of time; we expected him to win the title,” said Leclerc post-race.

We are well used to hearing cries of jubilation from the cockpit accompanying the coronation of a new champion, but not this season. Having only been crowned after the fact, the celebrations were slightly more muted. “It’s crazy! Very mixed emotions. Winning the championship, what a year we’ve had. It’s incredible,” said Verstappen.

Ultimately, the Dutchman will attribute little importance to how he secured his second title, which he described as “more beautiful” than the first. He can now set about the task of breaking Michael Schumacher’s record of 13 race wins in a single F1 season. Currently on 12, he has four races to do so, beginning in the USA in two weeks’ time.