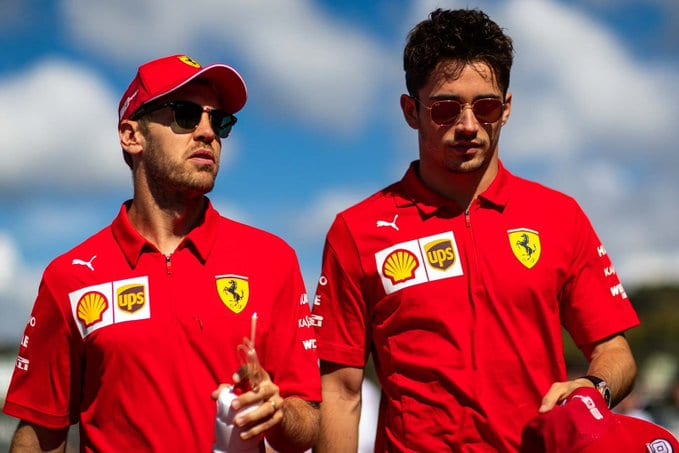 Four time World Champion Sebastian Vettel is parting ways with Ferrari after six years, making way for up and comer Charles Leclerc to take his place as their unofficial number one.

As news of Sebastian Vettel’s departure from Ferrari at the end of the 2020 season circulates, there are rumours abound as to the real reasons why. The German insists it was not money, though it was whispered that Ferrari’s new contract offer was paying him less. It’s not possible that it has to do with this season’s performance as Covid has aborted that. It also isn’t about retirement, as word has it that he is in discussions with at least one other team.

So, what is it that’s having him walk away?

Signs point to the troubled season the veteran pilot had last year within the team, and more specifically with the power plays between him and Charles Leclerc, though both men hotly deny this claim. It may also be because Vettel didn’t feel Ferrari had his back the way he wanted them to.

“In order to get the best possible results in this sport, it’s vital for all parties to work in perfect harmony,” said Vettel, who became part of Team Ferrari in 2015. “The team and I have realised that there is no longer a common desire to stay together beyond the end of this season.”
Ferrari management is also trying to stomp out any embers that the rivalry was the reason before a full-blown fire erupts, saying the two parties are parting on the best of terms.
Team boss Mattia Binotto said in a statement that, “This is a decision taken jointly by ourselves and Sebastian, one which both parties feel is for the best. It was not an easy decision to reach, given Sebastian’s worth as a driver and as a person. There was no specific reason that led to this decision, apart from the common and amicable belief that the time had come to go our separate ways in order to reach our respective objectives.”
At the start, the relationship between Leclerc and Vettel was that of apprentice and master, but it soon became apparent that Leclerc was ready for more, faster than expected. By the end of last season, Vettel seemed to have relinquished his role of tutor, giving Leclerc permission to take on a bigger role.
For his part, the Monegasque pilot says he will miss Vettel.
Leclerc took to Twitter to express his feelings and said, “It’s been a huge honour for me to be your teammate. We’ve had some tense moments on tracks. Some very good ones and some others that didn’t end as we both wanted, but there was always respect, even though it wasn’t perceive this way from the outside. I’ve never learnt so much as I did with you as my teammate. Thank you for everything Seb.”
Now that Vettel has departed, Leclerc will be looked to by his team and his bosses to bring home a World Championship. He will have his work cut out for sure, on that front and on one more. Reports are saying that Ferrari is looking at Australian driver Daniel Ricciardo or Spaniard Carlos Sainz as Vettel’s replacement. Both men placed well last season, at 9th and 6th respectively, and both are as driven as Leclerc for a World Championship.
Until Ferrari announces their pick, it’s wait and see.