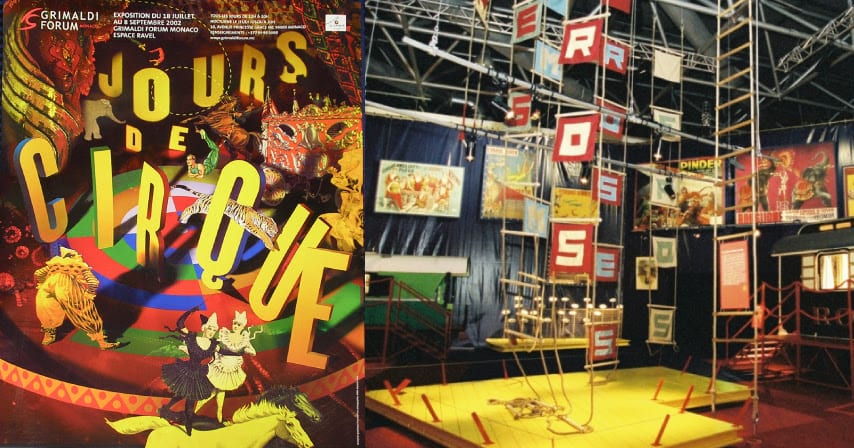 As part of the 20th anniversary celebrations for the Grimaldi Forum, a series retrospectives are being made available to the public. The latest, Circus Days, from 2002 is the third in the series giving circus lovers a glimpse at circus art and memorabilia from around the world.
Circus Days, a video from the September 2002 Grimaldi Forum exhibition of the same name, is animated by hundreds of characters, posters, parade floats, costumes and accessories, and even a 12-metre model, bringing the behind-the-scenes history of the circus to life for all ages.
Since circuses hit the scene in the 18th century, they have been places of wonder. Even as adults, many fondly recall the special family outings to the circus, a rite of passage into a secret world of clowns, acrobats and animal tamers.
Artists such as Toulouse-Lautrec, Picasso, Cocteau, Manet, and Chagall have memorialised the circus in their works, and “circus art” is a hugely popular genre, nearly on par with still-life, portrait and landscape. Photographers have been no less fascinated, and hundreds of photos were collected to decorate the original exhibit.
The video traces the route of the original expo featuring the extraordinary collection gathered by Geev Gourarier, curator of the exhibition. In addition to photos, posters and art, there were original horse drawn carriages, which also doubled as shelter for the artists, and were typically paraded through towns to announce the arrival of the spectacles.
To watch the video, visit grimaldiforum.com or click on the following link: https://tv.grimaldiforum.com/embed-440