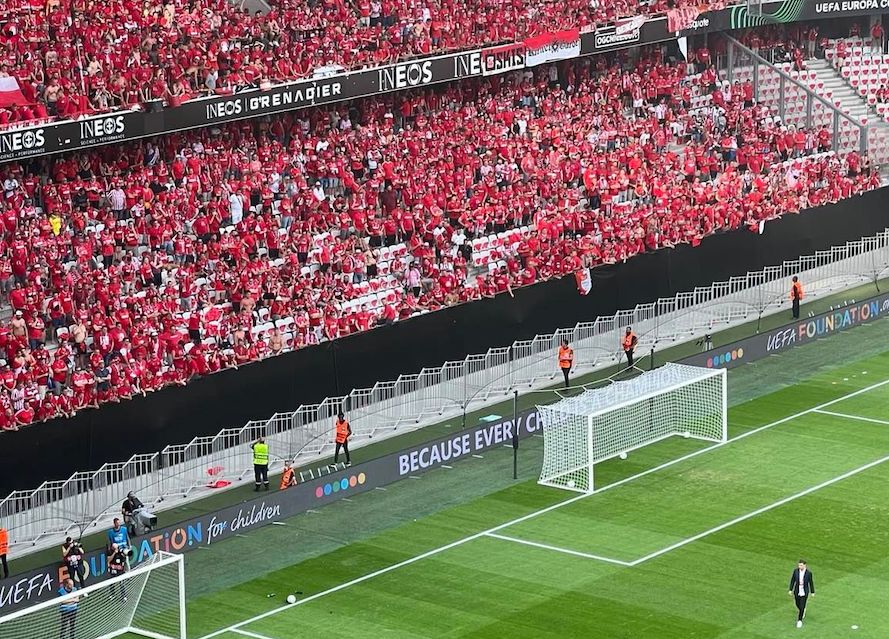 Clashes between OGC Nice’s ultras and the travelling FC Köln fans overshadowed the Europa Conference League opener at the Allianz Riviera on Thursday.

The fights, which were instigated by the travelling Köln fans who descended on Nice in droves, almost led to the postponement of the match. RMC had reported that the match had been called off completely amidst great uncertainty, diffusing the situation briefly, until a 55-minute delay to the 18:45 match was announced.

The build-up to the ugly scenes was incremental. It is reported that as many as 10,000 Köln fans made the trip to Nice for the opening gameweek of the Europa Conference League, the third tier of European football.

Many of them gathered in Place Masséna, Nice’s main square, during the day time. Whilst the gathering passed largely without incident, Nice’s official store, which is located within the square, was vandalised by a Köln ultras group. Local authorities later announced that they would be billing the club for the damages.

Others opted for the tram which, apart from driving, is the only other method of getting to the stadium. It had been known that Köln fans would arrive en-masse, and figures of 10,000 fans were touted days before the match. However, seemingly, no measures were taken to cope with this huge influx of people.

Not only were no extra trams put on, but delays to the service meant that line 3 trams were packed to the brim with Köln and Nice fans. Difficulties continued upon arrival at the stadium. In the Nice end, fans were told that they would not be allowed to bring bags into the stadium, a rule that had not been enforced previously, causing delays.

According to Köln fans that spoke to Monaco Life, the food and drinks bars were woefully understaffed with reports of waits for drinks of over 40 minutes. But it was in the stands themselves that the real chaos had descended. Köln fans, situated at the complete opposite end of the ground, made their way – unopposed – to the other side of the stadium before launching flares at the small crowd of Nice Ultras.

Ugly scenes ensued. According to L’Équipe, 32 people were injured in the mass brawls, which included launching missiles and flares. One of those injured is in a serious condition having fallen five metres into the stand below.

There are reports that fans of the now unrecognised PSG ultras group ‘Supras’ had infiltrated the Köln away stand, as well as fans of rival German team Borussia Dortmund. In attendance at the match, Monaco Life can confirm that a ‘Supras’ flag was present in the away end. It has also been confirmed that two of those injured are part of the Parisian group.

As a result of the unfettered chaos within the stadium, the entrances to the stands were closed as security forces grappled to regain control of the situation. Köln fans reported being locked out of the stadium for almost an hour.

In the meantime, it was unclear as to whether any football would be played. Journalists and fans were left in the dark until a tannoy announcement, after the scheduled kick-off time, reported that the game would kick-off at 19:40. It has been reported that local authorities and the Nice president, Jean-Pierre Rivère, had pushed for the game to be postponed.

Köln captain Jonas Hector came onto the pitch to calm the travelling fans, whilst urging them to support the team in the right way. Thereafter the situation calmed and the match went ahead, eventually finishing 1-1.

In order to avoid further trouble, Nice fans were designated buses to return to the city, and only Köln fans could return via tram.

The incident raises major questions about the local authorities’ handling of major sporting events. Their solution so far to the problem has been to prevent away fans from travelling to Nice, as was the case when Marseille played the club a couple of weeks ago. However, when they are unable to do so, as is the case with European fixtures, they have no answer and the scenes in the city centre, on the public transport system, and in and around the stadium attest to that.

Lessons must be learnt, and quickly, in order to avoid a repeat of the violent scenes that, not for the first time, have dominated a major sporting event on the Riviera.