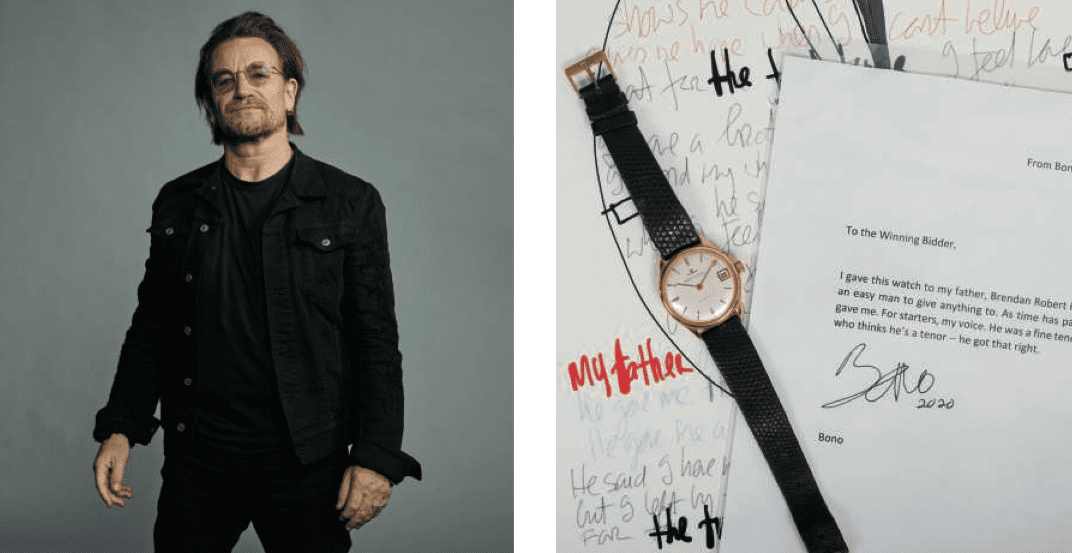 Stunning timepieces donated by high-profile personalities including Prince Albert and Bono will form part of the upcoming ‘Time Counts’ charitable auction, raising funds for the Prince Albert II Foundation and One Drop.
The two have joined forces with Phillips Auction House for the charity auction that will be integrated within Phillip’s Racing Pulse New York Watch Auction on 12th December.
The Time Counts initiative will be comprised of 12 exceptional lots dedicated specifically to the Prince’s Foundation and One Drop missions of providing access to safe water, sanitation and hygiene, and working towards improving climate resilience for some of the world’s most vulnerable communities.
Directed by Aurel Bacs and Paul Boutros – two of the world’s leading watch experts – admirers, collectors and philanthropists can be part of the Time Counts event and bid through an innovative live and online auction platform, no matter where they are in the world.
Included will be four incredible Audemars Piguet timepieces donated by Guy Laliberté, Founder of Cirque du Soleil, One Drop and Lune Rouge.
“The impact of Covid-19 on the population of the emerging and developing countries will have deep and durable consequences. That’s why we called this joint initiative Time Counts,” said Guy Laliberté. “We have to act now and raise money for this critical cause and show that we care, and we won’t accept any setback for the most vulnerable communities in the world.”
Other standout lots include a rare Audemars Piguet Royal Oak ‘Jumbo’ in stainless steel with the Prince’s name engraved on its case offered by the Prince Albert II of Monaco Foundation and two timepieces donated directly by Prince Albert II. These include a Montre Rebellion Predator 2.0, and a unique Urwerk in black titanium featuring a three-dimensional satellite hour display.
“Let us unite to ensure that water, a vital and common resource for humanity, will no longer be a global health issue but a duly respected right,” said Prince Albert II of Monaco.
Activist and U2 lead singer Bono is supporting Time Counts by donating a vintage, 18 karat pink gold Jaeger-LeCoultre timepiece along with a framed drawing of U2 lyrics, ‘The First Time,’ by Bono, dated 2020. Bono originally gifted this particular watch to his father, who he credits with giving him his voice.
Fellow philanthropist and businessman Kevin O’Leary is donating his iconic Rolex Cosmograph Daytona with signature red band. This highly sought after Daytona is a favourite of the Shark Tank wardrobe department because of its ‘camera appeal’ and has appeared in more episodes across Shark Tank’s seasons 10, 11 and 12 than any other watch O’Leary owns.
British Formula One racing legend David Coulthard is donating an IWC Big Pilot collection timepiece, Le Petite Prince, from his personal collection. Le Petite Prince model was released in 2016 and features a stunning, vintage-inspired blue dial designed for aviators.
Rounding out the list of star-studded donations is musician and media businessman Rory Kaplan who is showing his support with the donation of his vintage, Porsche Design Orfina Chronograph that he has worn for years as his good-luck charm.
The Phillips auction house currently holds numerous world records, including the highest price ever obtained for a vintage wristwatch sold at auction.
To see the One Drop catalogue, click here.

Photo taken from the One Drop catalogue