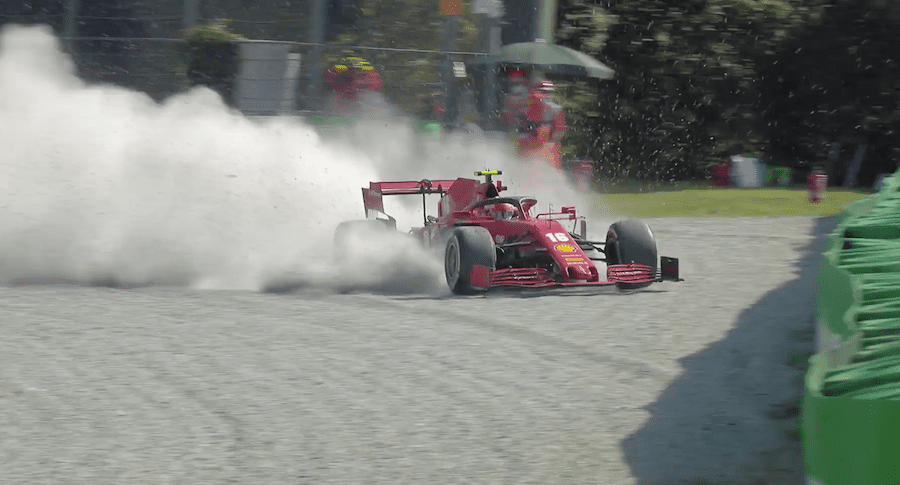 Monegasque Formula One driver Charles Leclerc has thankfully walked away from a huge crash at Monza, which saw the Italian Grand Prix red flagged for the first time in 25 years.

The Ferrari driver was midway through the Parabolica on Sunday afternoon when he veered into the barriers headfirst at speeds approaching close to 300 kilometres per hour.

Charles Leclerc was winded in the accident but quickly signalled he was ok before climbing out, saying: “Was a big crash – arghh! I’m sorry, but honestly I struggled so much with the balance. I’m sorry.”

Leclerc had been running in P4 when he crashed, having jumped up the order when the safety car and subsequent pit stops turned the race on its head.

The race was red-flagged following the incident on lap 24, the first time since 1995. It completed a miserable home race weekend for Ferrari after Sebastian Vettel had retired from the Italian Grand Prix earlier on.

After the race, Charles Leclerc told reporters on Canal+ “I lost the car, there’s no need to look further than that.”

Pierre Gasly, a 24-year-old Frenchman, caused a shock by winning his maiden race for AlphaTauri.

Lance Stroll was third, with Lando Norris fourth in the second McLaren.

Photo: Screen shot of the race

Results are in on largest ever F1...

What should I do after a holiday...

Local News Stephanie Horsman - July 16, 2021
It is vacation season, so what should residents be considering when they return to the Principality after a holiday abroad?