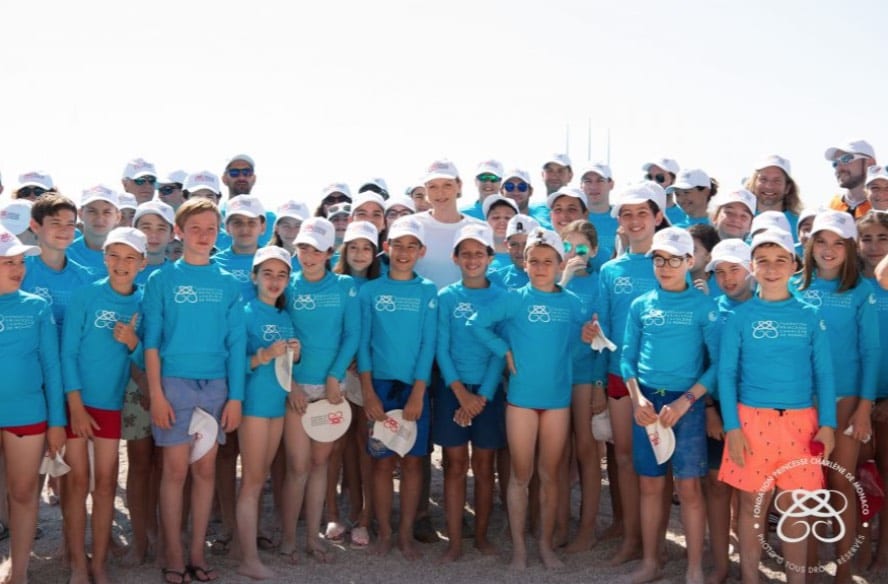 HSH Princess Charlene has celebrated Water Safety Day with local school students and a host of athletes, raising awareness about how to stay safe on the water.

The Princess Charlene of Monaco Foundation, the Aquatic Rescue and Diving Centre of Monaco (CSAPM) and the association Cap ô Pas Cap, organised the special event on 17th June, in partnership with the Monaco Red Cross.

In the presence of HSH Princess Charlene and Gareth Wittstock, General Secretary of the Princess Charlene of Monaco Foundation, 58 school children aged between 11 and 13 were welcomed at the Larvotto Beach in Monaco to discover and learn about aquatic rescue.

Encouraged by Marc Toesca’s comments, the personalities then took part in a friendly competition called the Ocean Race Sprint (Challenge for the Committed Celebrities). Each team was drawn at random and composed of three athletes who then competed in turns and in relay. The different challenges involved running, swimming and rescue paddle.

During the event, the Maritime Police of Monaco participated in a rescue demonstration using a new jet ski. Meanwhile, Sébastien Uscher launched the challenge ‘Stand up for the planet’, 30,000 paddle strokes for 30,000 pieces of waste collected. His start from Larvotto beach formalised the beginning of his awareness campaign to encourage young and old to pick up waste both on and offshore.

Restube’s and Oneup’s self-inflatable buoys were used during the sea rescue demonstrations.

The messages of the Princess Charlene of Monaco Foundation are more relevant today than ever: to raise public awareness of the dangers of water, to educate children about prevention measures and to teach them how to swim. It was a tragic summer last year in France. From 1st June to 30th September 2018, 1,960 drownings were recorded, 597 of which were fatal, according to Santé Publique France.

The Water Safety Day was organised with the support of the Department of Education, Youth and Sport of Monaco (DENJS), the Monaco Red Cross, Cap ô pas Cap, the Maritime Police of Monaco and ‘Water Family du Flocon à la Vague’.

The day ended with a signing session which gathered children and adults.