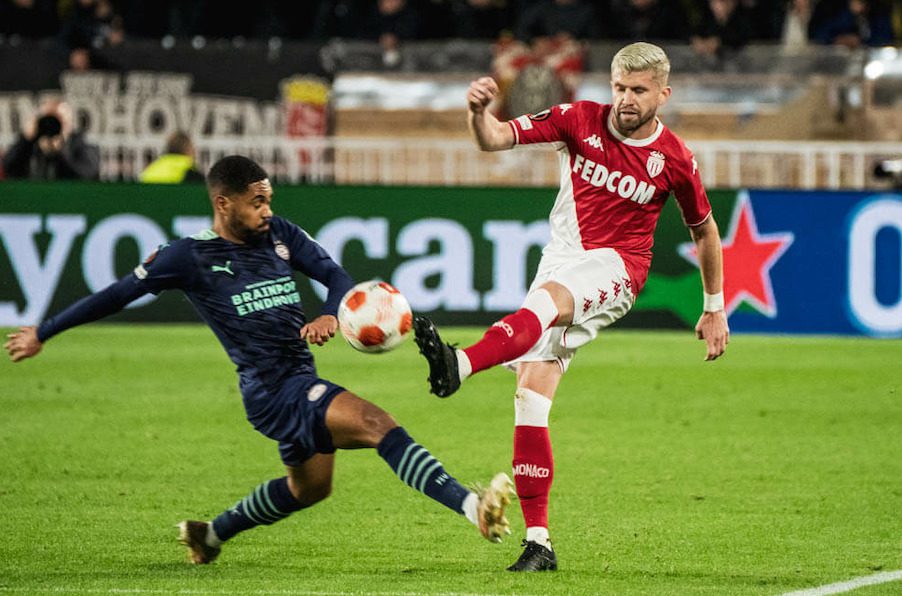 Despite a flurry of second-half chances, AS Monaco were held to a goalless draw by PSV Eindhoven at the Stade Louis II. However, results elsewhere kept Kovac’s men top of their Europa League group.
ASM started sloppily and slowly, unable to build any attacking momentum, and despite the threat posed by PSV’s Vertessen in particular, whose bursting runs drew fouls in dangerous areas, ASM were nonetheless defensively solid.
Monaco, usually quick and dynamic on the break, failed to execute their counter-attacks against an attacking PSV, often breaking down through sloppy passing, miscommunications, or a general lack of desire to commit to the attack, preferring instead to retain possession.
The lack of energy on the pitch translated to the stands. As the half-time whistle blew, the ASM players trudged back to the dressing rooms amidst silence, neither applause nor boos from the stands, just a general apathy towards the performance.
Clearly similarly discontent with his side’s first-half performance, Kovac wrung the changes at half-time; on came Golovin, Diop and Sidibe to provide extra attacking impetus. As well as making a triple change, Kovac also gave an insight into his half-time team-talk. “Sometimes one must wake the players up. Today I was maybe a bit louder than usual.”
https://www.instagram.com/p/CV3kBrQM3hi/?utm_source=ig_web_copy_link
Kovac’s words and actions had the desired effect. ASM came out a lot more lively in the second-half, and looked the more dangerous side. Golovin, still building up his fitness following injury, added extra flair and creativity, whilst ASM were also grateful for Diop’s direct running.
Almost immediately after the break, Boadu had a gilt-edged opportunity to open the scoring, having found himself one-on-one with the keeper, but his attempt to round the PSV keeper was foiled. Boadu was played in once more just moments later, but poor control meant the chance went begging.
The best chance of the night fell to Tchouaméni, whose header was spectacularly cleared off the line by PSV defender Ramalho. The score therefore remained 0-0, and that is how it finished. Real Sociedad’s draw at home against Sturm Graz ensured that Kovac’s men remained top of their Europa group with two games remaining.
During the post-match press conference, Nico Kovac, when questioned by Monaco Life about Golovin’s fitness and impact from the bench said, “We must increase his workload. He needs game-time, and little by little he will re-find his rhythm, and we will see the ‘Golo’ of last season.”
Kovac also said that he was encouraged by his side’s second-half display. “My team wanted to win, but my feeling is that we were sometimes a bit restless, not too confident. In the second-half it was much better, we tried a lot more.” Although happy with the draw, Kovac also called for improvements. “I am happy with the point, but we know we’re capable of doing better.”
Kovac’s men have the opportunity to get back to winning ways with a trip to Reims on Sunday.