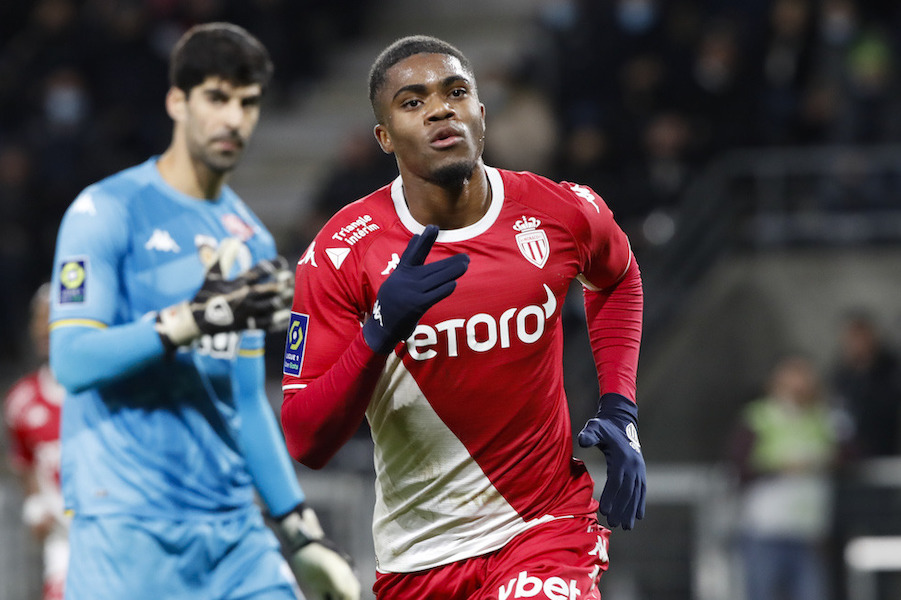 ASM’s in-form Dutch striker Myron Boadu sat down with Monaco Life to discuss the team’s recent resurrection, the impact of Philippe Clement, and the process of “becoming himself” again.

Arriving from AZ Alkmaar in August 2021, the €17 million price tag looked to be weighing heavily on the young Dutchman’s shoulders, as he netted only twice during Nico Kovac’s reign as AS Monaco manager, averaging a goal every 510 minutes. Fast forward to May and Monaco are on a seven-game winning run, whilst Myron Boadu, under the tutelage of new manager Phillipe Clement, looks to have broken free from the shackles that constrained him during those difficult beginnings, scoring three goals in his last six games and averaging a goal every 96 minutes.

Monaco Life: Coming from the Eredivisie, you took time to adapt to Ligue 1. How do you evaluate those first few months?

Myron Boadu: I’m a young player. For me, it was the first time going abroad and of course to a stronger league, so that was a little bit difficult in the beginning. I expected it, but on the other hand, I also expected that I’d be scoring goals every game, like in Holland. I talked a lot with my agent, with my parents, with the coach at that time and Paul Mitchell as well. So, they gave me the confidence to just do my thing, they said just have patience and my qualities will show through. I also spoke with Calvin Stengs (OGC Nice winger). We talked about the new life that we were experiencing, and he had similar problems to me. I think it was good to have each other.

What would you say are the most notable differences between the two leagues?

I saw a difference in the style of play. Most of the teams play against us with five defenders, and in the Eredivisie, even the clubs that are playing to avoid relegation are playing a 4-3-3, attacking football. That is the main difference, as well as the physicality. It’s not normal. All of the defenders here are so strong, and I consider myself a strong guy. That’s what really stands out for me. What I see here as well is that everyone has a winning mentality, even in training, which is a little bit different from Holland. In training in France, when we lose as a team, we can really go back to the dressing room angry, disappointed. It is really competitive, but I think that is good. In Holland, it’s a little bit less so. We come off the pitch and it’s finished.

You talk about training, how has the intensity of those sessions improved you both on a physical and tactical level?

I had to adapt, it was finding out the right schedule to work on my physique. It was also good to replicate in training what I would expect in a game, with Axel Disasi, Benoît Badiashile and Aurélien Tchouaméni. Those kinds of guys are super strong, so in that way, it allowed me to adapt to Ligue 1’s style of play. Ben Yedder is a fantastic player as well, and a fantastic person. For me it was important to see a top striker in front of me. I’m happy that he’s my team-mate. In training I watch what he does, how he does it, and I try to add it to my game. If we are in a finishing drill then he and Kevin Volland will give me words of advice, and I appreciate that from them.

Having undergone that process of adaptation, you scored against Nantes in the defeat on penalties in the Coupe de France semi-final. Can you talk us through that bittersweet moment?

It was a very important moment for me because I felt that from January until that moment I became the person I am today, I became myself again. The first six months was a matter of adapting to this new situation and I think that is normal… I was ultimately disappointed, I wanted to be in the final, but I was happy to have scored that goal. For me at that point, I knew I just had to continue like that.

That match was the beginning of a difficult March. How pivotal has Clement been to the turnaround? Disasi and Badiashile have both talked about the calmness and optimism that he exudes.

After that match, we had a lot of disappointments one after another, but the coach always told us that he knew how good we could be, and I think that is important for a coach to do that and we respect him a lot. We want to fight every game for him and for the fans, to win the games.

On a personal level, how is it having a coach that speaks your mother tongue?

He knows I can score goals, he gives me a lot of confidence and he talks with me a lot. Whilst I can understand French, it makes it easier in training, because he can explain to me even better in Dutch and then I know exactly what to do. I don’t even have to think, I just know.

The turning point came in a 3-0 win against PSG. Despite a difficult run leading up to the fixture against the league leaders, how was the atmosphere within the group?

Before PSG, the dynamic within the team was already good, but of course if you beat PSG 3-0, it’s going to do a lot of good to your confidence. On top of that, PSG is the best team in the league. We already knew how good we were, we just needed a game to confirm that, and PSG was that game.

Since that victory, Monaco have strung together another six wins, amounting to a seven-game winning streak, their best since January/February 2021. The team is clearly high on confidence, whilst you have scored three goals in your last six fixtures. How confident are you at the moment?

The confidence in taking the next chance is something that I also had in Holland so I had to rediscover that. At the beginning of my time here I got overly frustrated with myself when I missed a chance, whereas now I just think, “okay, you missed this one, but the next one is going in, and if you miss the next one then the one after that is going in”. This season has taught me a lot. I also talk with the right people and they give me extra confidence to refind myself. Now I just want to continue to score goals and I hope that I can do that.

Of course, the hope is that Monaco’s run takes them into next season’s Champions League. Is that a dream of yours to play in that competition?

The Champions League is where the best teams are, and of course you want to compete with the best. I think with the history that Monaco has, we should be playing in the Champions League. It is a dream for all of us, and I know that we can do it. Of course, we have three finals so we’re not there yet. For us, it’s important just to keep doing the same things that we have been doing, by not thinking about the table. We just have to win our games, and we do that by being ourselves.

It’s a dream to go to the World Cup for sure. But at this point I just want to continue here like I’ve been doing. For me, the Dutch squad is currently far away, but I think everything is possible. So, I just have to continue, end the season well, and then from the first minute of next season, I have to do the same.

Boadu is only just hitting his stride at Monaco, and should he continue down the same path, there is no reason for him not to force his way into Louis Van Gaal’s plans, whilst his dream of playing Champions League football next year remains very much alive.