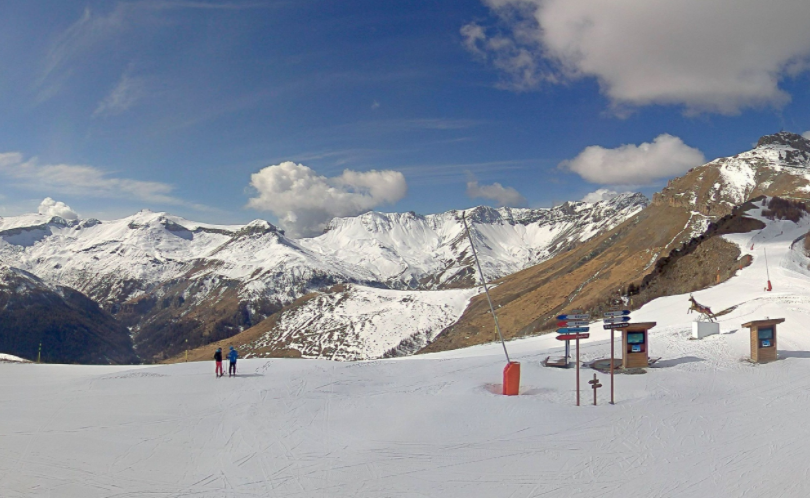 We may be exiting the winter season, but skiers have a great choice of resorts for some Spring skiing. Snow is expected to fall throughout the region over the weekend as temperatures plummet.

Isola 2000 – There are currently 23 ski slopes and 14 ski lifts open at Isola. Visitors can expect there to be between 100 and 80 cm of spring snow. The weekend is expected to be largely overcast, although there is a chance of snow over the weekend. Between 2-6 cm of snow could fall on Sunday. Although we are now in April, temperatures at the resort are plunging. Skiers can expect highs of 3°C and lows of -9°C. The col de la Bonette and la Lombarde roads are closed until the end of the winter season.

Auron – There are currently 20 ski slopes and 13 ski lifts open at the resort, with between 85-75 cm of standing snow. It will be chillier than last weekend with highs of 4°C and lows of -5°C. Conditions at the resort will be changeable throughout the weekend. Although there is a chance of sun, there is also the omnipresent possibility of snow throughout the weekend, with a chance of up to 13 cm of snow on Sunday. There will also be some strong winds, reaching up to 52 km/h on Saturday. In terms of access, Route de la Tinée, Route de la Bonette, Piste de la Moustière, Piste de Demandols all remain closed.

Les Deux Alpes – There is a huge choice of runs at the resort with 64 ski slopes and 37 ski lifts currently open. There is 65cm of hard standing snow, which could be supplemented by some fresh snowfall on Sunday. Friday and Saturday are expected to be largely foggy, whilst temperatures are expected to be way down on last weekend with lows of -10°C and highs of just -1°C.

La Colmiane – Although the resort closed this week, it will be opening exceptionally for this weekend. It will also be possible to practise some summer activities including, mini-golf, high ropes courses and zip-wiring. Similarly to elsewhere in the region, conditions will be changeable, whilst winds could be high, reaching up to 81 km/h on Saturday. There will also be a decent chance of snow, especially on Sunday. Like elsewhere, temperatures have also plummeted with highs of 5°C and lows of -5°C.

Greolieres les Neiges – The winter season has come to an end at the resort as the ski lifts closed on Monday. Greolieres is now preparing activities for Easter and the Summer season.

Limone Piemonte – There are currently 7 runs open and 5 ski lifts. Snow levels vary from 40 to 10 cm. From 28th March there is only access to the “sole” zone. It will be a largely overcast weekend with precipitation in the form of snow or rain possible throughout the weekend. Temperatures at the resort are considerably down on last weekend with lows of -2°C and highs of 7°C. Passage through the Roya valley currently isn’t possible due to the collapsed bridge at Tende. Drivers must instead pass through Ventimiglia and the journey from Monaco is currently approximately three hours. Alternatively, it is possible to drive to Tende and take a 20/30 minute train to Limone Centre. The train runs 12 times a day between 07:00 and 18:45, with the journey from Monaco taking approximately 1 hour 45 minutes.

Valberg – The winter season has come to an end at the resort as the ski lifts closed on Sunday. The resort is now preparing for the Spring season.