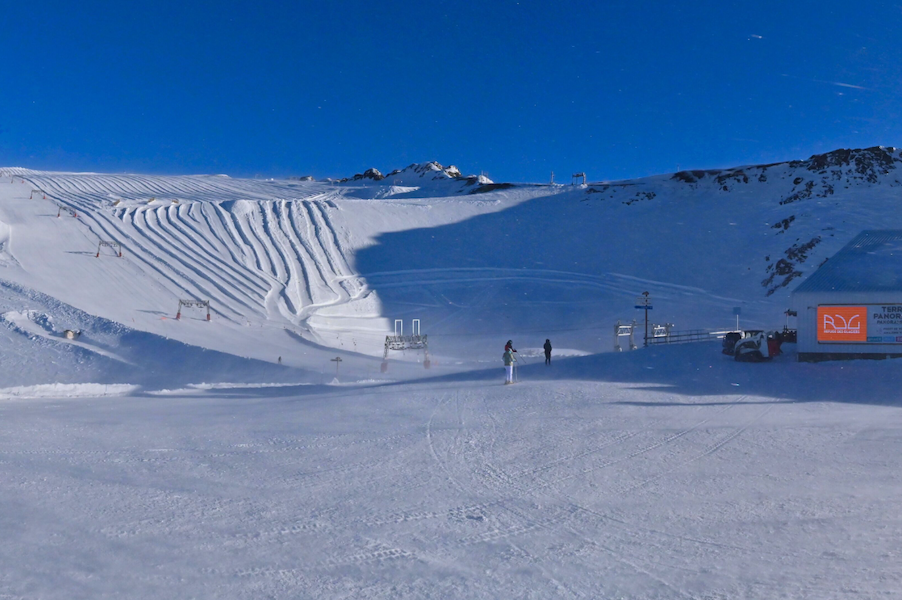 Isola 2000 – There are currently 20 ski slopes and 14 ski lifts open at Isola. There is 70-55 cm of snow at the resort, however no further snow is expected over the weekend, and the snow canons are in full force. Similar to last week, it is forecast to be entirely sunny over the weekend. There will be highs of 6°C and lows of -6°C. The col de la Bonette and la Lombarde roads are closed until the end of the winter season. There is a local products market taking place at the resort on Saturday.

Auron – There are currently 22 ski slopes and 11 ski lifts open at the resort and around 30cm of standing snow. It is expected to be entirely sunny over the weekend with highs of 6°C and lows of -5°C. There will also be winds of up to 28 km/h on Saturday. In terms of access, Route de la Tinée, Route de la Bonette, Piste de la Moustière, Piste de Demandols all remain closed.

Les Deux Alpes – There is a large choice of runs at the resort with 79 ski slopes and 38 ski lifts currently open, and 50cm of soft standing snow. It is expected to be sunny throughout the weekend. Friday will be chilly with lows of -9°C and highs of 5°C. Saturday will also see the ninth edition of the night-time snow trail event, with a variety of trails available from 5-20 km.

La Colmiane – There are currently 10 ski slopes and five ski lifts open at the resort, with between 40 and 30cm of standing snow, the last falling on 27th December. As it is throughout the region, it is expected to be sunny over the weekend with winds of up to 51 km/h on Saturday. There will be highs of 5°C and lows of -6°C. The resort hasn’t reported any road closures.

Greolieres les Neiges – There is currently 40cm of artificial standing snow at the resort. It will be sunny throughout the weekend with highs of 6°C and lows of -2°C. The resort isn’t reporting any road closures. There are currently five ski lifts open.

Limone Piemonte – There are currently 16 runs open at the resort and 11 ski-lifts, with a minimum of 10cm of snow and a maximum of 45cm in places. The last snowfall at the resort was on 27th December. Visibility should be good throughout the weekend. It is expected to be sunny with lows of -4°C and highs of 8°C. Passage through the Roya valley currently isn’t possible due to the collapsed bridge at Tende. Drivers must instead pass through Ventimiglia and the journey from Monaco is currently approximately three hours.

Valberg – There are 18 ski slopes and 11 ski lifts open. The resort currently has 40cm of standing snow.  It is expected to be sunny all weekend with highs of 8°C and lows of 0°C. Due to the Rallye Monte-Carlo, La Route de Guillaumes to Valberg, via Peone, will be closed on Friday. Guillaume, Peron, and Valberg will be hosting a special event for the rally, including 75 cars on two different runs, both of which happen on Friday.