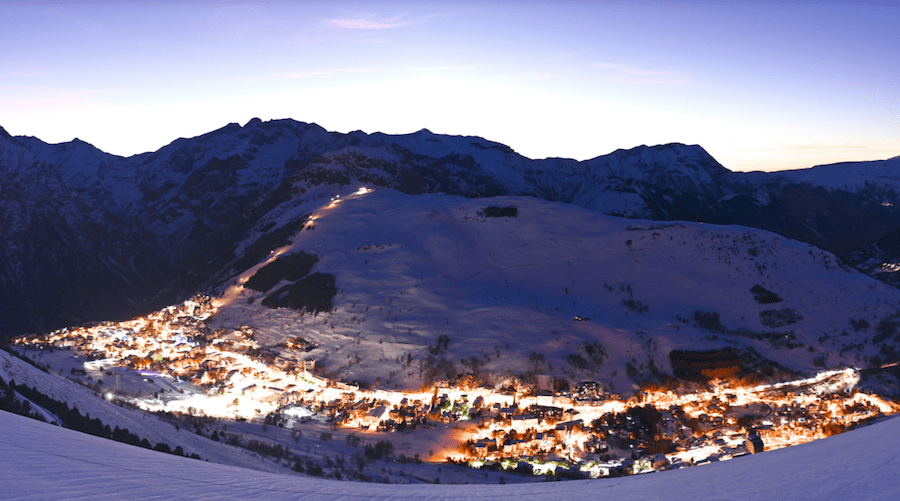 If you are looking to hit the slopes to welcome in the new year, expect mild conditions. It will be largely sunny throughout the region, and no snow is expected. But there is still 100cm of standing snow at Les Deux Alpes.

Isola 2000 – There are currently 26 ski slopes and 13 ski lifts open at Isola. There is 75 cm of snow at the resort, however no snow is expected over the weekend. It is forecast to be largely sunny over the weekend, with a little more cloud on Sunday. There will be highs of 13°C and lows of 5°C. The col de la Bonette and la Lombarde roads are closed until the end of the winter season.

Auron – There are currently 22 ski slopes and 16 ski lifts open at the resort. There is around 35cm of standing snow. It is expected to be largely sunny over the weekend, with a bit of cloud on Friday and Sunday. There will be highs of 12°C and lows of 5°C. There will also be winds of up to 23km/h. In terms of access, Route de la Tinée, Route de la Bonette, Piste de la Moustière, Piste de Demandols all remain closed.

Les Deux Alpes – There are currently 65 ski slopes and 41 ski lifts open. There is already 100cm of standing snow at the resort. It is expected to be a clear weekend at the resort, with some clouds on Sunday. There will be highs of 11°C and lows of 4°C.

La Colmiane – There are currently 11 ski slopes and 5 ski lifts open at the resort. There is also between 35 and 45cm of standing snow. As it is throughout the region, it is expected to be largely sunny over the weekend with the chance of cloud on Sunday. There will be highs of 12°C and lows of 6°C. The resort hasn’t reported any road closures.

Greolieres les Neiges – There is currently 0cm of standing snow in the resort, with no snow forecast over the weekend. It will be largely sunny throughout the weekend with highs of 17°C and lows of 7°C. The resort isn’t reporting any road closures.

Limone Piemonte – There are currently 14 runs open at the resort and 11 ski-lifts. There is a minimum of 15cm of snow throughout the resort with a maximum of 55cm in places. Visibility should be good throughout the weekend. It is expected to be sunny throughout the weekend, with lows of 7°C and highs of 14°C. Passage through the Roya valley currently isn’t possible due to the collapsed bridge at Tende. Drivers must instead pass through Ventimiglia and the journey from Monaco is currently approximately 3 hours.

Valberg – There are 18 ski slopes and 12 ski lifts open. The resort has 40cm of standing snow, but it has not snowed since 9th December.  It is expected to be sunny all weekend with highs of 13°C and lows of 7°C.

Previous articleYes, you can enjoy a quick trip to Italy
Next articleMandatory work from home until at least end of January
Luke Entwistle

Local News Stephanie Horsman - June 22, 2020
As part of its relationship with the United Nations refugee branch UNHCR, Monaco is now the agency’s main contributor per capita, supporting projects for displaced people across the globe – an achievement that was commended on World Refugee Day.

The Prince Albert II of Monaco Foundation has made a major contribution to protecting endangered species by launching a programme in conjunction with Cambridge University’s Conservation Initiative and nine other conservation organisations. The initiative was signed in the British Parliament on Wednesday evening in the presence of the All Party Parliamentary Group for Polar Regions. Prince Albert said, in an address to 100 MPs, peers and academics: “The protection of biodiversity and, therefore, of endangered species is an issue to which I attach a great deal of importance. “It is together that we will be able to save our biodiversity. This is a principle of effectiveness. But it is also a principle of humility; none of us can act alone.” The Prince also referred to man’s “hubris and a tendency to subjugate nature” which has led “our society to follow a path of unsustainable development”. World-renowned naturalist and broadcaster Sir David Attenborough told the same meeting that this major initiative would “break down silos and foster collaborations”. He added: “Conservation used to be about protecting certain species or specific places but we now know that there is an entire way of life that is at hazard.” The Foundation’s commitment marks the 25th anniversary of the 1991 Madrid Protocol, which proclaimed the Arctic as a “natural reserve, devoted to peace and science".