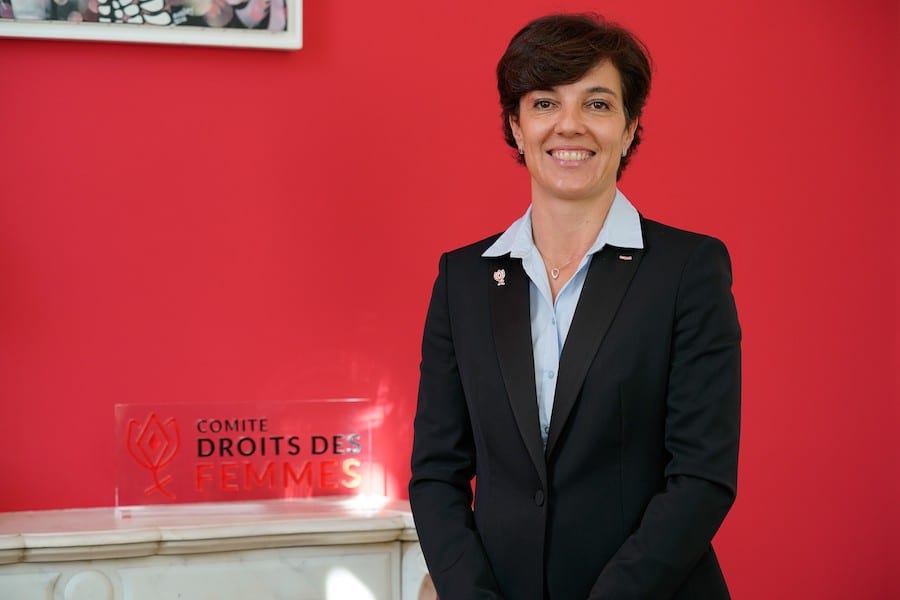 On Monday 8th March, the world celebrates International Women’s Day. It is an opportunity to applaud the achievements of women in our society while highlighting the very real inequality that still exists today.
To mark the occasion, Monaco Life spoke to the Principality’s Interministerial Delegate for Women’s Rights Céline Cottalorda.
Monaco Life: An important part of International Women’s Day (IWD) is celebrating women’s achievements. So, which women do you look up to in Monaco and why?
Céline Cottalorda: We are fortunate to have a lot of remarkable women in Monaco. It’s a difficult question, because I’m going to forget some, but I would specifically mention Princess Grace who left a very strong imprint on the Principality.
In the political field, the first female mayor of Monaco, Anne-Marie Campora, was also very important for the Monegasque population. There is also Marie-Pierre Gramaglia, the Minister for Equipment, Environment, and Urban Planning, who is serving in a sector traditionally reserved for men and who has established herself since her arrival in the government through her humanity and her work.
In the artistic field, I am delighted that Cécilia Bartolli will soon take the helm of the Monte-Carlo Opera because she is a woman of great talent.
In the business world, Pharmacist Ornella Barra, who leads thousands of people around the world, sets a great example of success.
The official IWD theme this year is #ChooseToChallenge, promoting the idea that from challenge comes change. How is the Committee for the Promotion and Protection of Women’s Rights challenging female inequality in Monaco?
Women are sometimes afraid to dare and believe in themselves. So, the challenge for us as women is to overcome the mental limits that we impose on ourselves. This is one of the things that motivates me to create a network of women in Monaco to talk and help build confidence, and make myself better known in professional circles.
Women’s role in the fight against Covid is the theme of IWD in Monaco this year. How significant has this role been for women?
The pandemic has shown that women have to be mobilised on all fronts at the same time: at work where some are on the front lines, and at home where it has been necessary to take care of daily chores and children’s homework. For those who were teleworking and confined with their families, this could have been a source of difficulty in the organisation within the home. Of course, men have also been affected by this crisis, but we realise that the so-called “essential” jobs are those where there are more women than men, for example health jobs and supermarket cashiers.
How does the #8MarsMonaco campaign highlight these women?
Operation #8MarsMonaco highlights all of these women on the front line during the confinement of March 2020: everyday heroines who have helped, cared for, nourished and protected. We carried out a photographic campaign with 64 women from these sectors. It was obvious to me to pay homage to them and put them in the spotlight, those who are usually in the shadows.


From more housework and the burden of care, to lost employment and education opportunities, the pandemic could wipe out 25 years of increasing gender equality, according UN Women. Do you agree that there is a real risk of reverting to 1950s gender stereotypes because of the pandemic?
Times of crisis carry the risk of undermining women’s rights, for example by preventing access to education or making their economic situation more precarious. We must therefore be vigilant in maintaining women’s rights and continuing to advance them.
Fortunately, in Monaco, there is no going back. We have continued our activities as much as possible with all the actors involved in the Committee for the Promotion and Protection of Women’s Rights. For example, we have been focussed on the aid and emergency systems available for female victims of violence during confinement.
The latest report by IMSEE shows that three quarters of all public service workers in Monaco are male, and the only sector where there is a majority of women is in health and administration. What is being done to even out the playing field and do you see this happening any time soon?
We have to change mentalities and for that, education is important, especially in the choice of courses in school. I also strongly believe in the positive value of example. By highlighting companies where gender diversity is the norm, it can push other companies to do the same. There is a recognised contribution in terms of productivity to having gender diversity.
How important is it for men to get involved in IWD?
When women’s rights advance, human rights advance. Women’s rights concern us all and it is important to involve men because they have everything to gain from being alongside women. This is the meaning of the equality campaign that we have deployed with the Committee – an inclusive, positive campaign to raise awareness of inequalities and change mentalities.
Awareness, raising meaningful narratives, and access to resources can help combat gender bias. How are the children in Monaco’s schools being educated about gender equality?
The National Youth and Sports Education Department is leading this action. However, I know that education in equality and respect for others is taught in schools in Monaco. Meanwhile, there are well established associations who are raising awareness of equality such as She Can He Can, and Action Innocence with regards to the risks of cyberstalking.
According to the World Economic Forum, none of us will see gender parity in our lifetimes, nor likely will many of our children. They say gender parity is not likely to be attained for almost a century. Is it difficult to stay motivated when hearing that?
I don’t think it’s that slow. You can see it with the impact of #MeToo. In just four years, mentalities have changed significantly and society’s outlook on these subjects has changed. Overall in Western societies, we have equal rights.
Now, it is real equality and equal pay that must progress. When you think back to society in the 1950s, you can see that things can progress quickly. In 70 years, the status of women has improved more than ever. Of course, much progress remains to be made, especially in countries where there is no such thing as equal rights and where women are not considered equal to men.
Gender bias starts early and runs deep. What can parents do to ensure they are raising a generation that perpetuates equality?
The earlier we educate, the more equality is no longer an issue and becomes obvious. This will be one of the Committee’s priorities in 2021 and 2022, and it will require close collaboration with the National Education Directorate. Of course, school cannot do everything and the role of parents is fundamental because the role models and representations they instil in their children on a daily basis will build their personality and the stereotypes of tomorrow. It is therefore also necessary to educate parents.
Is there anything else you would like our readers to know about IWD?
I hope that the 8th March campaign carried out by the Committee will bring joy in this difficult time and that the smiles of all these women will be infectious. I will meet you on 8th March on the Committee’s social networks to discover the short, exclusive film which was produced to highlight all these women whom I again thank for having participated in the operation.
Links:
Committee for the Promotion and Protection of Women’s Rights:
Website
Facebook