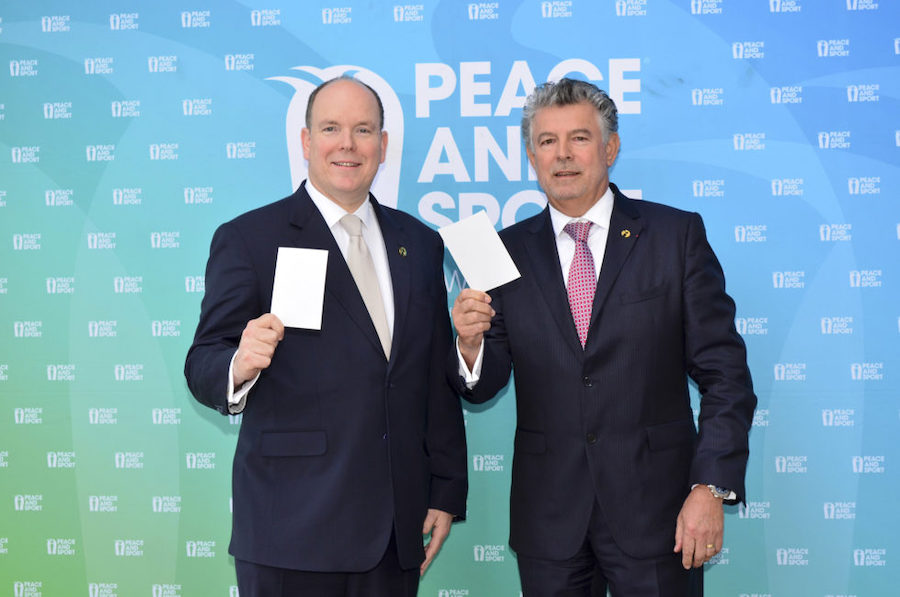 This year’s White Card campaign has been another huge success, reaching over 170 million people with its inspiring stories, including one from former Olympian Prince Albert.
The White Card campaign, organised by Peace and Sport for the eighth year and celebrated on the 6th of April, asked people all over the globe to go online and share their personal stories and photos. Reaching 170 million people, the inspiring stories of hope and understanding poured in from everywhere, including the Palace of Monaco, where Prince Albert II revealed his own.
Each year since 2014, the organisation Peace and Sport has held a digital event called White Card. Using a play on the sporting worlds use of yellow and red cards, the white card is meant to be a positive, used “as a sign of commitment to peace efforts worldwide and where small actions make a difference.”
This year, over 200 stories were registered on the event’s site, along with a photo of the person who offered the story holding a white card. The topics range from tales of gender equality, intercultural and interreligious understanding to social inclusion, peace education, youth empowerment and reconciliation.
Prince Albert II, a five-time Olympian, contributed his own personal story of what participating in the games meant to him, saying, “My experience in the Olympic Village during the Olympic Winter Games allowed me to meet athletes from other cultures and forge relationships on an equal footing. This learning has always been with me and has contributed to my understanding of the world as Head of State. On the occasion of the International Day of Sport for Development and Peace, I am raising my White Card to promote the universal values ​​of sport.”
The Prince’s family has a history of Olympic participation, with both his uncle, John Kelly Jr. and grandfather, John Kelly, having been former Olympians themselves.
The Prince was joined by sports figures, political leaders, diplomats and beneficiaries on the site.
Peace and Sport was founded in 2007 by Joël Bouzou, a Modern Pentathlon Olympic Medalist and World Champion. The association uses “the power of sport” to promote peace. They bring together NGOs, United Nations agencies and academics on the peace side, and Olympians, athletes and international sporting federations on the sport side to implement sport programmes in parts of the world affected by social instability, poverty and war.
“It is fantastic to see once again such a massive and diverse expression of support to the peace-through-sport movement,” said Bouzou. “We have received exceptional White Card stories of Champions for Peace, famous and committed athletes, coaches, children, women, men and passionate people from all over the world. I want to thank H.S.H. Prince Albert II for His contribution making this positive dynamic even more meaningful.”
The White Card site was visited by 170 million people in 117 countries this year, and in the coming months, the organisation will continue to collect stories and feedback to keep spreading the good word.
To read these inspiring stories, visit the website at www.april6.org