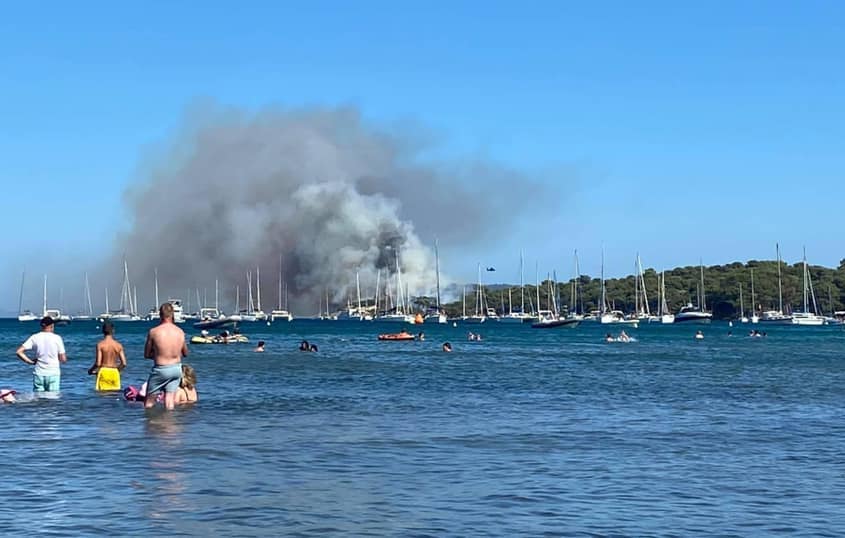 Firefighters are battling a massive wildfire that has so far claimed over 5,000 hectares in the Var, forcing evacuations and destroying properties.

The blaze has mobilised 700 firefighters from the region, along with some from the neighbouring Alpes-Maritimes, reminding people of the dangers that the hot and dry weather can bring.

The fire started on Monday at around 5:45pm in Gonfaron and firefighters spent all day and night trying to get it under some sort of control. The mistral winds, which reached gusts of up to 70km/hour, have made efforts incredibly difficult. By dawn on Tuesday, the Massif des Maures, north-east of Toulon, was an eerie moonscape.

French Interior Minister Gerald Darmanin said that, “weather conditions are unfavourable” in what seems a vast understatement. He announced he will be visiting the affected area to monitor the situation.

In addition to the manpower on the ground, helicopters and Canadair planes have been deployed to try and douse the blaze.

“The speed of propagation of the fire is out of the ordinary,” said Fire Captain Olivier Pecot. “Normally with these conditions, a fire moves at 1,000 meters per hour. There, it was moving and even again this night at 4,000 metres per hour.”

A crisis unit has been set up in the area as authorities fear the worst is yet to come. The fire is not under control, and flames are still being battled in the Plain des Maures and in the Golfe de Saint-Tropez areas.

So far, over a hundred homes have been affected, though on a positive note, there are no reported casualties. A dozen campsites have been cleared as a precaution and one site in Grimaud has been completely destroyed.

Several roads are closed to traffic including the RD33 from Le Luc to Les Mayons, RD75 from Gonfaron to La Garde-Freinet, RD558 from La Gardeto Freinet-Grimaud, RD14 and RD2048 in Grimaud, RD27 in La Môle. The prefecture is also asking residents not to travel by car between Bormes-les-Mimosas and Golde de Saint-Tropez, in both directions.

The fire is one of the biggest to hit the region this summer and is reminiscent of the fires that decimated the area in 2003 when more than 54,000 hectares (133,500 acres) burned, killing three firefighters and two British tourists.