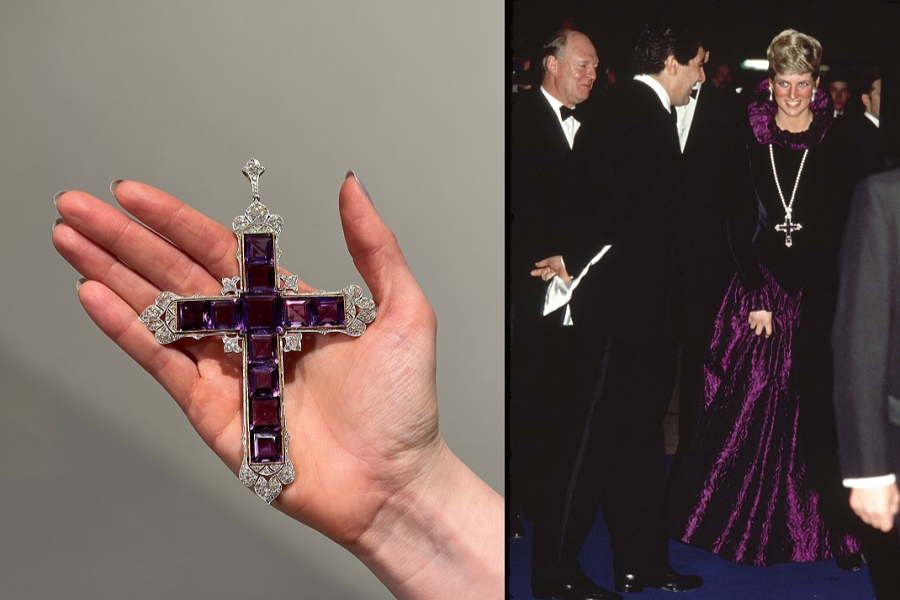 A 1920s jewelled cross worn on several occasions by Princess Diana was sold on Wednesday to US media personality Kim Kardashian, who beat three other bidders in a down-to-the-wire Sotheby’s auction.

The Attallah Cross, designed by jeweller Garrard and famously worn by Princess Diana to a charity gala in 1987, has been acquired by the 42-year-old Kardashian for £163,800 (roughly €186,550) at an auction that took place on 18th January at Sotheby’s London. It went for over twice the pre-auction estimate.

The late businessman and former CEO of Asprey & Garrard, Niam Attallah, bought the cross from Garrard in the 1980s. His close relationship with Princess Diana saw her borrow the unique piece, which features square-cut amethysts and circular diamonds equalling 5.25 carats, on several occasions.

“This is a bold piece of jewellery by its size, colour and style, which cannot fail to make a vibrant statement, whether it be of faith or fashion – or indeed both,” said Kristian Spofforth, Head of Jewellery at Sotheby’s London. “We are delighted that this piece has found a new lease of life within the hands of another globally famous name.”

Ahead of its sale, Spofforth said, “Jewellery owned or worn by the late Princess Diana very rarely comes on to the market, especially a piece such as the Attallah Cross, which is so colourful, bold and distinctive. To some extent, this unusual pendant is symbolic of the princess’s growing self-assurance in her sartorial and jewellery choices, at that particular moment in her life.”

According to the auction house, the cross was only ever worn by Princess Diana, and following her death in 1997, it wasn’t seen again in public until now.

Kardashian, never a wilting violet, has recently shown much interest in items previously worn or owned by famous people. In May 2022, she attended the Met Gala in the gown Marilyn Monroe wore to sing Happy Birthday to President John F Kennedy in 1962.