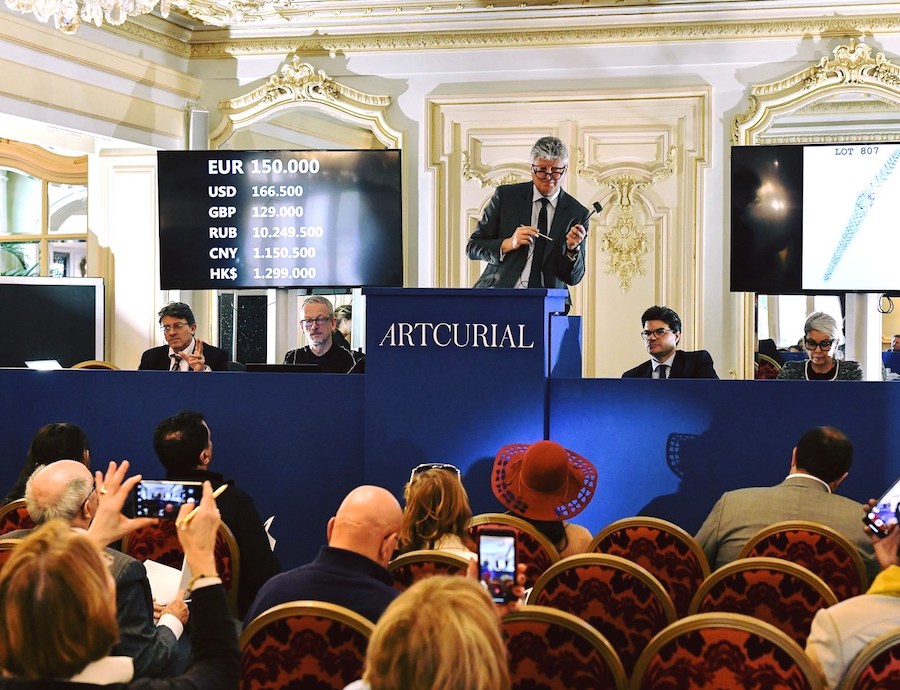 After three days of auctions at the Hôtel Hermitage, Artcurial has exceeded expectations with a grand total in excess of €6.1 million.

The auctions, held from 14th to 16th January, were deemed a great success, with lots that included fine jewellery, elegant watches, and vintage Hermes handbags. Especially popular on the block were a collection of ladies’ watches called Le Temps est Feminin, which exceeded the anticipated performance.

Master auctioneer François Tajan kicked off the bidding and between the two watch collections, brought in a total of €2.5 million, with four watches being sold for over €100,000 a piece.

The biggest watch sales were for two Patek Philippe diamond and platinum timepieces sold to collectors from the Middle East for a staggering €225,000 each. Other high ticket sales went to a Rolex Comex at €110,500 followed by another Patek Philippe, a Nautilus, and a Royal Oak signed Audemars Piguet.

Pocket watch sales from two private collections brought in over €400,000 and represented 20% of the overall sales figure.

The following day two jewellery sessions brought in €2.9 million, with exquisite pieces being snapped up by private collectors. Some of the most impressive were a Lalique signed neck plaque that went for €195,000, a large diamond-encrusted brooch by René Boivin that went for €50,700, and a stunner of a platinum ring featuring a 9.52 carat cushion cut diamond that was bought for €122,000.

Additionally, 80% of the lots that were part of Italian actress Ornella Muti’s showcase were sold.

The Hermes Vintage and Fashion Arts lots ended the three day extravaganza and had 86 items up for grabs, with sales topping €650,000. The Birkin bags were the undisputed highlights and included a gorgeous Birkin 30 in Indian Rose suede that sold for more than seven times the estimated sale price, a Birkin 35 in estuary crocodile and a Birkin 30 in blue Mykonos ostrich.