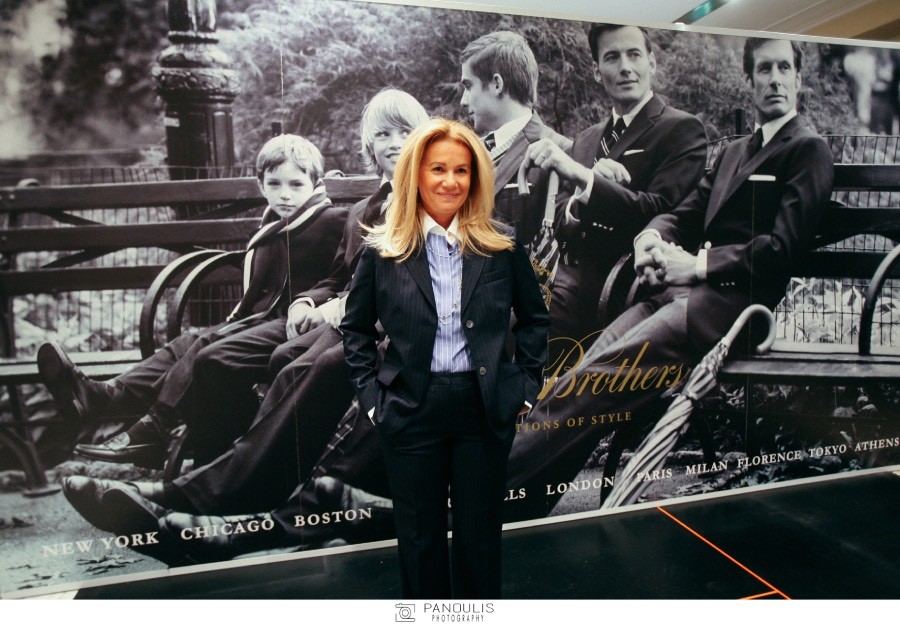 Sophia Vaharis Tsouvelekakis is not only a much-loved member of the Greek community in Monaco, she is an enthusiastic entrepreneur and self-proclaimed “ideas lady”, whose incredible business acumen has generated an impressive real estate and retail portfolio throughout Europe, in partnership with her husband Konstantinos Tsouvelekakis.

Sophia spoke to Monaco Life about the importance of setting personal challenges and her overriding passion to support the Hellenic Community of Monaco as its president.

Monaco Life: Let’s start at the beginning, Sophia. Tell us about yourself…

Sophia Vaharis Tsouvelekakis:I was born and educated in Athens then studied marketing in Switzerland. They were some of the best years of my life; it’s when you discover the world. We moved to Monaco with my family, and in 1992 I married my husband Konstantinos Tsouvelekakis, who was also an entrepreneur.

Together, we invested in real estate and retail in Greece and throughout Europe. We managed to survive the Greek crisis by following my father’s philosophy: when you are in a crisis and you have 10 euros, you keep seven and you do whatever you want with the three euros, but not the other way around. It is a philosophy I am hoping to pass on to my two children: my son, who is studying to become a yacht broker at the International University of Monaco, and my daughter who has just returned from studying in New York and is working in marketing with me here at Brooks Brothers. I am very proud of this store, which opened with the inauguration of the Monaco Yacht Club in 2014. We supply clothing for yacht club members, it is a wonderful partnership, and perhaps the best location for a retail store in the world.

As a female entrepreneur, how did you manage the work-life balance and also the perceptions of women in your professional life?

Personally, I don’t see it as a male/female thing. I think if someone wants to work, they work. Of course, if you have children it is very difficult if you don’t have help – parents, childcare, nannies – but you can manage if you want to work. However, if a man and a woman are in the same position in a company, a woman must be twice as good as a man, because she is forced to prove herself. But I think women are better because they can manage many things at the one time: their family, husband, work and life in general. Plus, when a woman is in a powerful position, she tries to create an equal environment for staff, such as wages. We bring something more to the table because we can fix everything. It is in our nature.

What have been your strengths in your professional life?

I have a big imagination. I have a lot of energy. In fact, I have too many ideas. Not all of these can be realised, but I am brainstorming all day, for everything. So, if you throw five things on the table, at least one will work. Also, I want the people who are working with me to be happy and to advance in their career. If people who are working with us choose to leave and start their own business, I am happy. All I ask is that they remember who supported them at the start, and say “Thank you”.

What have been some of your achievements outside of work?

In 1988 I was the only female competitor in the 24-hour Chamonix rally (on ice). I told my father, “don’t worry I will take care of everything”, so I saved money and rented a car and team from Rally Monte Carlo. We came 8thand when I finished, they were throwing snow at me, which apparently meant I had been accepted. I also came third in the 2006 Women’s 10-metre air pistol championship in Greece, and have held the Guinness World Record for the largest collection of wine and champagne labels since 2013. Currently, I have more than 16,700 labels from over 60 different countries

So, you obviously aren’t afraid of a challenge…

Yes, and being president of the Hellenic Community of Monaco is my new challenge. The club was founded in 1952, and I think we are the oldest in Monaco after the Swiss club. I am the fifth president and when I was elected a year ago, I changed the statutes to three-year terms, with two terms maximum. I think it is important that new blood and new ideas enter the fold. There are exceptions, for example if there are no other valid presidents then the outgoing president can be honorary and work from this seat until the next election.

I have never been involved in public life up until now, and I am very good at asking people to join the club and contribute. We had 189 members, and now we have 504. People from all over the world can join the community, but only Greeks, Cypriots and Monegasques can vote. So, it is great for networking, on all levels of business, and for building support in the Hellenic community and promoting Greece and Cyprus.

Do you host events for your members?

Last year we organised a great evening with businessman Dakis Joannou and Sir Stelios Haji-Ioannou, founder of easyJet, during Art Monaco at the Grimaldi Forum. They spoke about how they both started in their careers and I presented awards to successful members of the Hellenic Community.

In April, we invited Greek fashion designer Mary Katrantzou to present her collection and give a talk. She has won numerous awards and was a great inspiration. Money raised from that event went towards a 5,000€ scholarship for a Greek student to study in Monaco.

This summer we also started organising tours to Greek islands, and this is something we look forward to continuing each year.

What is your vision as president of the Hellenic Community?

My dream is that all of the associations here in Monaco will come together for an event, once or twice a year, and bring something from their country, be it a singer, an artist, food etc. I think this is a great way to connect all of Monaco through the people of the Principality.