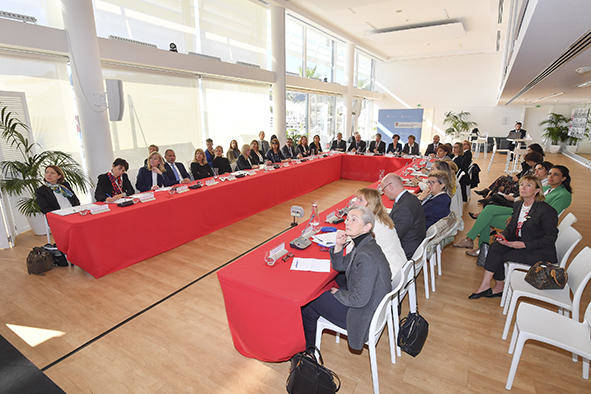 The meeting was an opportunity to draw up an initial assessment of what’s been undertaken since the committee’s creation on 30th November, and to define the guidelines that are to be implemented and followed in the future.

In the presence of Committee President and Minister of Foreign Affairs and Cooperation Gilles Tonelli, Delegate Céline Cottalorda presented a summary of the current state of play and the main objectives of the committee.

Meanwhile, Director of IMSEE Sophie Vincent gave a progress report on ongoing studies concerning the measurement of possible wage inequalities between women and men and the setting up of indicators on violence against women.

The following measures were also announced at the meeting: the creation of a social platform dedicated to the committee, grants for associations working for women’s rights, the tabling of a bill on the extension of maternity leave from 16 to 18 weeks, a legal study to update the regulatory texts containing obsolete provisions, and thematic working groups were established to allow participants to meet regularly and advance women’s rights.

There was a commitment to implement a vocational training group, a prevention and education group, and a study and statistics group in order to achieve the committee’s missions. The work of these groups will be reviewed and discussed at the next meeting of the committee which will take place before the end of 2019.

The meeting was attended by representatives of relevant government authorities, the Directorate of Judicial Services, elected members of the National Council and the City Council, the High Commissioner for the Protection of Rights, Freedoms and Mediation, the Council Economic and Social Affairs and representatives of associations working for women’s rights.

Previous articleWhaleathon: running for the ocean
Next articleMonaco frustrated by Bordeaux
Staff Writer

Local News Luke Entwistle - April 26, 2022
Monaco’s women's basketball team won the French Cup on Friday against US Le Poinconnet (69-50), celebrating their second title in five years with the travelling fans, who made the journey to Paris.

Local News Cassandra Tanti - April 29, 2020
The most isolated and vulnerable people in Monaco during the Covid-19 health crisis, the elderly, are being given free digital devices to help stay in touch with family while maintaining social distancing.