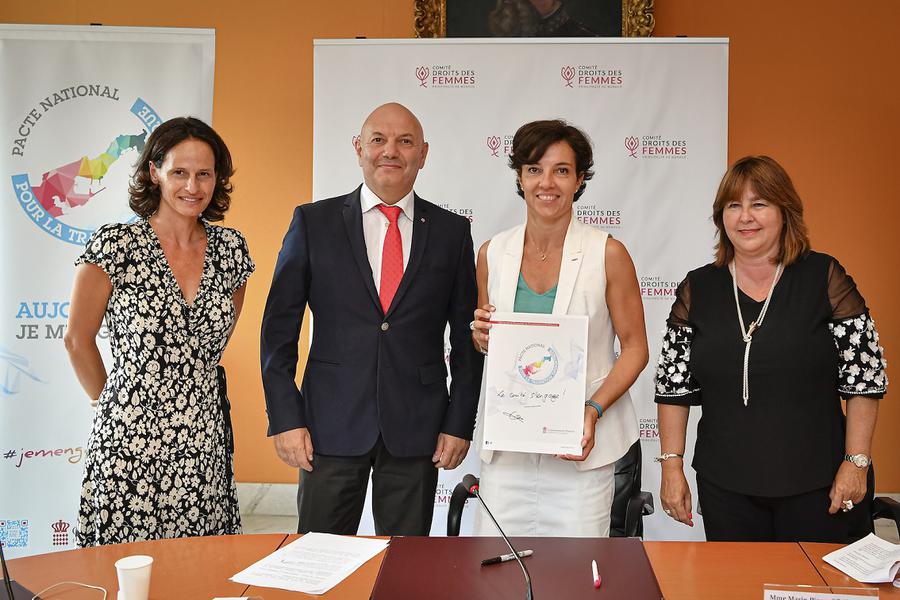 The Committee for the Promotion and Protection of Women’s Rights is now part of the Principality’s energy transition pact.
The charter was signed by Minister of Foreign Affairs and Cooperation and the Women’s Committee’s Chair Laurent Anselmi, Minister of Public Works, Environment and Urban Development Marie-Pierre Gramaglia, Director of the Mission for Energy Transition Annabelle Jaeger-Seydoux, and Céline Cottalorda, the Chief Officer for Women’s Rights Committee, along with other members of the Committee.
Mr Anselmi pointed out that “in signing the National Energy Transition Pact, our Committee, which is dedicated to promoting and safeguarding women’s rights, is making a firm contribution to the interaction driven by the UN; at the same playing a modest but determined role in helping to build the structure that the Principality is steadily creating, at the behest of the Sovereign Prince.”
Marie-Pierre Gramaglia added that this was “an effort that must unite us all: Monegasque nationals, residents, employees, people from all socio-professional backgrounds, all of the stakeholders within our community – today, the Women’s Rights Committee, and tomorrow, all of you.”
Céline Cottalorda, who signed on behalf of the Committee, said that she wanted “to set an example and encourage women in the Principality and the associations that are involved with the Committee to commit to protecting the environment.”
The Office of the High Commissioner for the Protection of Rights, Liberties and for Mediation, as well as local organisations She Can He Can, Soroptimist and Femmes Leaders Mondiales Monaco also pledged to sign the National Energy Transition Pact Commitment Charter.