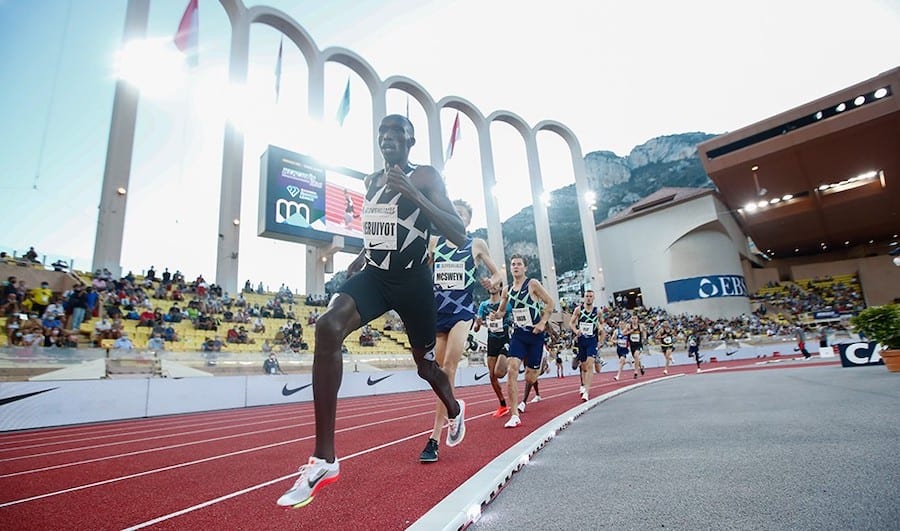 It was an exciting day in athletics as Kenyan world champion Timothy Cheruiyot, Botswana’s Nijel Amos and Ethiopina Lamecha Girma all set world lead times at the Herculis Diamond League at Stade Louis II, whilst Faith Kipyegon from Kenya set the world lead for the ladies in the 1,500m.
Friday saw some amazing track and field action at the Herculis Diamond League event, giving fans a taste of what to expect in Toyko in the coming weeks at the Olympic Games.
Reigning world champion Timothy Cheruiyot, who is currently not eligible to race for his country in the Olympics, won the 1,500m with a time of 3:28.28, shaving a minuscule amount off his personal best time of 3:28.41. Spain’s Mohamed Katir and Jakob Ingebrigtsen from Norway rounded out the podium.
“Today’s race was good and I won it for the third time,” he said in an interview with Athletics Weekly. “I missed competition a lot after spending a lot of time in Kenya where I had a few issues like my hamstring injury and after also losing a relative in my family on the day of the Kenyan trials, explaining why I missed out on making the team. Hopefully that will be the deciding performance to make the team for Tokyo. My hope now is to be in another Olympics, that is where my mindset is and I will be very happy if I achieve that.”
The men’s 800m saw another world lead by Nijel Amos from Botswana, who was the silver medal winner in the London Olympic Games in 2012, with a time of 1:42.91. Emmaunuel Kipkurui Korir from Kenya placed second and Marco Arop took third.
The 400m men’s hurdles was won by Norwegian Karsten Warholm, with the silver and bronze going to Alison Dos Santos from Brazil and Rasmus Mägi from Estonia respectively.
The 3,000m Steeplechase saw Ethiopian Lamecha Girma place first with a time of 8:07.75 followed by Kenya’s Abraham Kibiwot and France’s Djilali Bedrani.
The 100m sprint went to American Ronnie Baker with a zippy time of 9.91. Russian Akani Simbine was close behind in second, and third place went to Italy’s Lamont Marcell Jacobs.
The high jump winner for men was Russian Mikhail Akimenko going 2.32 metres, and the long jump went to Greece’s Miltiadis Tentoglou who leapt 8.24 metres.
The women’s 1,500m was dominated by Faith Kipyegon from Kenya who has a world lead time of 3:51.07, followed by Sifan Hassan from the Netherlands and Ethiopian Freweyni Hailu in third.
The 800m event saw Brit Laura Muir take the top spot, with compatriot Jemma Reekie taking silver and American Kate Grace getting the bronze.
The 200m women’s event was won by the Bahama’s Shaunae Miller-Uibo, followed by Côte Ivoirian Marie-Josée Ta Lou and Jamaica’s Shelly-Ann Frasier-Price.
The 3,000m steeplechase found a winner in Kenya’s Hyvin Kiyeng. Fellow country woman Beatrice Chepkoech came second and Bahraini Winifred Yavi was third.
The top spot in pole vaulting went to American Katie Nageotte, with second and third going to Russian Anzhelika Sidorova and Greek Katerina Stefanidi.
Women’s triple jump saw Jamaica’s Shanieka Ricketts come out on top, with Venezuelan Yulimar Rojas in second and Patricia Mamona from Portugal in third.
Finally, the javelin throw was won by Czech Barbora Špotáková, with Poland’s Maria Andrejczyk taking silver and German Christin Hussong taking the bronze.