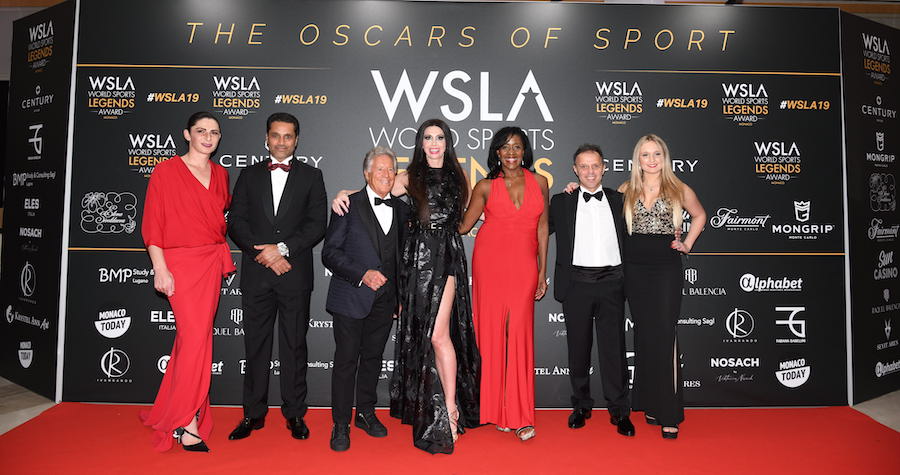 Dubbed the Oscars of Sport, the prestigious two day extravaganza paying homage to the world’s top athletes is now also a hub for glamour and fashion.

The 4th annual World Sports Legends Awards (WSLA) were hosted 6th and 7th December at the Salle d’Or in the Fairmont Hotel.

This year, in addition to honouring the world’s top athletes for their personal and professional achievements, the event featured entertainment, art and fashion, creating a glamorous red-carpet occasion worthy of its nickname.

Hosted in five languages by Ambassador and Master of Ceremonies, international ballet star Lorena Baricella, the Saturday night Dinner Gala paid tribute to the best of the best athletes for their endeavours on and off the sport’s fields.

Nasser Al-Attiyah from Qatar is a three-times Paris-Dakar winner and an Olympic medallist. One of the greatest sportsmen of the Middle East, he’s now preparing for the next Dakar race and the Olympic Games in Tokyo. He is also involved as the Ambassador for the Football World Cup in Qatar in 2022.

American F1 World Champion, Indycar and Nascar Champion Mario Andretti is a true racing icon. He is at the head of a dynasty of eight pilots including his son Michael and his grandson Marco. He’s the only person to win Daytona, Indianapolis and the F1 World Championship. His legendary career boasts 111 victories.

Loris Capirossi from Italy is a three time MotoGP World Champion. He had one of the longest careers as a rider and has become Safety Advisor for the International Moto Federation.

Ana Gabriela Guevara hails from Mexico. She is a 400m World Champion and a multi Olympic medallist. She is now turning her hand to politics and she has been nominated Minister of Sport of Mexico.

The WSLA Best Values Award for Community Support went to Brit Connie Henry for the Track Academy. Formerly an international triple jumper, she founded this organisation to help young people from disadvantaged backgrounds through Athletics.

The WSLA Posthumous Award went to Ferenc Puskás, Hungarian football champion and legend of the football world who also had his country’s national stadium named after him. The award was received by the Puskás family represented by his great-granddaughter Ane De Juan Damborena, and the former President of Hungary and Olympic Champion, Pál Schmitt.

The Gala and was touted as an American-style show, punctuated with a red carpet arrival for guests and entertainment by a ballet troupe and an orchestra.