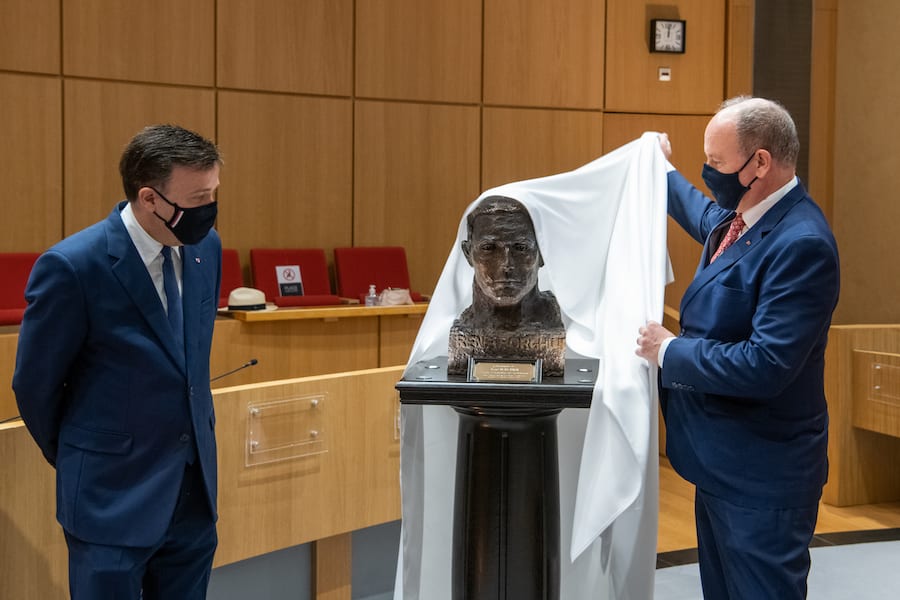 Prince Albert has unveiled a bust of World War II resistance fighter Rene Borghini, a tribute to the life of the Monegasque who was arrested and subsequently killed in 1944 by the German occupying forces.

In his speech, Mr Valeri thanked the Prince “for having accepted to follow up on the proposal to honour, with this bust, the Monegasque resistance fighter and martyr René Borghini, who was, during his arrest by the gestapo, secretary of the presidency of the National Council, the equivalent now of secretary general.”

Borghini, along with his liaison officer Esther Poggio and Joseph Lajoux, were arrested in July 1944 for acts against the occupying German forces, and were shot on 15th August 1944 in the Ariane district of Nice just as Allied forces were landing in Provence.

“This date of August 15, 1944 is no accident,” Veleri went on to say. “For months, the occupier had known that the allies were going to land. But they didn’t know where or when. René Borghini knew it, he, who had hidden under his desk the plans of the

Less known than D-Day in Normandy, Dragoon – the code name of the Landings in Provence – was nevertheless of strategic importance. One of his objectives was to create a new front in France and destroy the German 19th Army, which was in charge of the defence of south-eastern France. In total, more than 94,000 troops and 11,000 vehicles were disembarked on the first day.”

Then, using the words of his distant predecessor President Charles Bellando who, in 1947, paid a vibrant tribute to René Borghini, Valeri quoted, “Certain figures are, in the life of a people, like points of reference on the path of its historical development and around which the patriots regroup when circumstances dictate.”

Prince Albert added a few words as well, saying, “The younger generations indeed need to know what the strength and the resolve of the men and women who gave their lives for the freedom of their country and, beyond, our continent.”

The bust of René Borghini will soon be placed in its permanent home at the entrance to the Grand Hémicycle.

Photo provided by the National Council