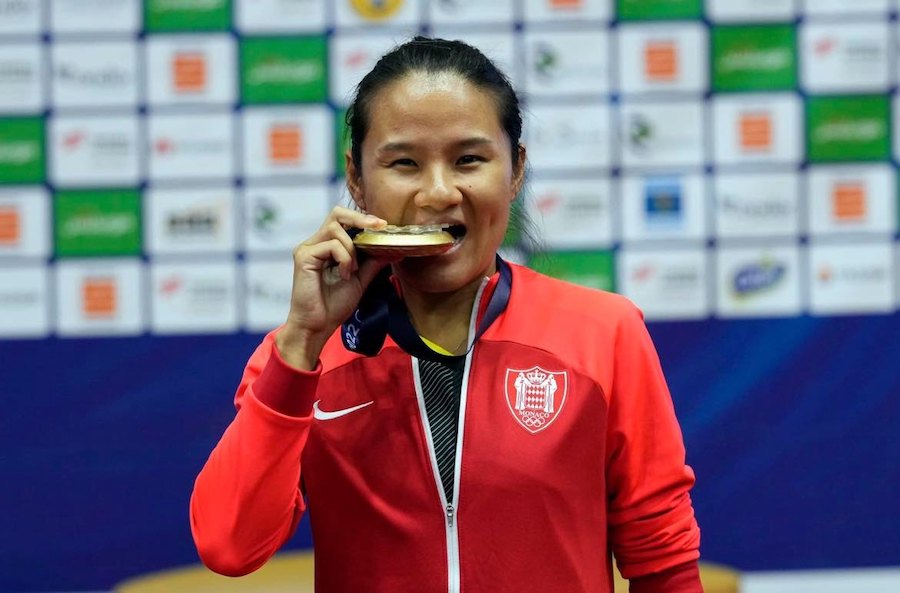 After taking out gold at the Mediterranean Games in Oran, Algeria last month, Monegasque table tennis star Xiaoxin Yang sat down with Monaco Life to talk about what it is like to represent her adopted country.

Table tennis has always been Xiaoxin Yang’s passion. Born in China, Yang embraced her country’s national sport from a young age before moving to Europe to ply her trade as a professional with stints in France and then Italy. But it is in the Principality where she has flourished and proudly represented the Principality’s colours.

Seven years after being naturalised in Monaco, she was holding aloft the Principality’s flag at last summer’s Olympic Games in Tokyo, in what she described to Monaco Life as “a source of pride”. Her journey in Japan ended in the third round with a defeat at the hands of Chinese player Sun Yingsha.

Even prior to that impressive showing in the Olympics, Yang showed that she was capable of vying with the best. She came up just short in the 2018 Mediterranean Games in Tarragona, but that competition provided her with the motivation and the momentum to go one better at this year’s games.

A number one ranking going into the tournament was validation of her improvement. “In 2018 I finished second, it’s true that in the past four years I have progressed well and that’s reflected as well in the global rankings,” she told Monaco Life.

A number one ranking can sometimes be a curse rather than a blessing, but Yang didn’t let any complacency seep into her game.

“I told myself that I am number one going into this competition but that doesn’t mean anything, because if you don’t play well you can lose against anyone. I prepared my matches well, and as the number one, everyone was a bit scared of me. When I’m preparing for every match, I am wary,” she said.

That level of preparation showed in her approach to every game, and manifested itself in sheer domination throughout the competition. Yang won three of her matches in straight sets (4-0), including the final against Jieni Shao.

Aware of her capabilities, the extent to which she controlled the final was a surprise to even Yang herself. “Sport is never easy, especially during the key moments. In those moments I played well, using the right technique and choosing the right game strategy. Even when I won 4-0 in the final, I was shocked because I was playing against a girl who is difficult to face and I had previously struggled to beat her. So, I am very happy with myself because I feel that I have progressed in every way,” she said.

“Motivated” by the presence of Prince Albert II during the competition, her gold medal in Oran is a yardstick of her progression. Now a top-10 ranked player, Yang dreams of a medal in Paris in two years’ time, but she isn’t getting ahead of herself.

Although there is still lots of work to be done, should Yang continue her upwards trend, she could write herself into the Monegasuqe history books in Paris in 2024 by becoming the Principality’s first medal-winner.