The Monaco Yacht Club (YCM) has marked another very successful year for its sailors who have competed in events across the world.

HSH Prince Albert, the club’s president, told members at the annual YCM Awards-Trophée Credit Suisse, on December 20, that the club is resolutely turned towards the sea.

“You are its proud representatives. In the yachting world, sailing is our showcase, and your performances are a reflection of that.”

The Club’s 2,000 members voted Pierre Casiraghi as YCM Sailor of the Year for 2017. Casiraghi, the Yacht Club’s Vice-President, launched himself into offshore racing on board Malizia II, an IMOCA 60’, which joined the Monaco fleet in June 2017. The debut season for Princess Caroline’s son proved to be very successful, including third place in the prestigious Rolex Fastnet Race.

The awards ceremony celebrated the younger generation’s achievements. Logan Viciana won the YCM Youth Awards-Trophée Credit Suisse for the sum of his results at the head of the 23-strong Monegasque Optimist team, which included qualifying the Club for the World Championships in Thailand.

For the second year running, Jérémy Moutout was recognised for his performances during 2017, his first year in the Olympic Laser Standard class. Third in the French Internationals at Quiberon, he also won the seven-stage Mediterranean Championship.

The evening brought families together at the Club and welcomed 40 new full members.

No Finish Line 2017. Photo: Philippe Fitte[/caption] In 2016, Barclays Monaco set a very tough objective to complete 10,000 km in the 8-day No Finish Line Monaco, not an easy feat when you think that the circuit is only 1.4 km long. Not only did the 220 people that made up Barclays team manage 10,321 km, they also tied for overall 3rd place for teams with Fight Aids Monaco. This year, Barclays Monaco raised the bar to 12,000 km and ended up covering a distance of 13,452 km (more than a roundtrip flight from Nice to New York), which helped inch up on the podium to 2nd place overall in the Team Category. For each kilometre completed, sponsors donated €1 to Children & Future, an association that supports projects in favour of disadvantaged or sick children. Five Barclays’ colleagues each surpassed the 200 km mark, while 12 managed over 100 km. [gallery td_select_gallery_slide="slide" size="large" ids="27856,27851,27857,27855,27852"] In addition, and for the first time ever, a Barclays team of 6 runners – 4 Barclays staff and two external runners— registered for the official 24-hour relay race. They took 1st place with a total of 332.525 km, a lead of over 11 km on the runner up while beating the 24-hour record by nearly 10 km, set by the Monaco Fire Brigade in 2016. No Finish Line Monaco, which tool place from November 11-19, 2017, saw 12,967 participants covering a total distance of 436,963 km – nearly 37,000 km more than expected – to raise €436,963. Paula Radcliffe, who was an Ambassador for the 2017 Barclays Monaco No Finish Line team said, “Congratulations and thanks for inviting me to be part of such a nice strong team.”

Barclays long-term aim continues to be about making decisions and doing business that positively impacts clients, customers and shareholders, as well as the communities in which they operate. Its Citizenship Strategy is a very simple concept: "When the communities we live and work in thrive, we do too. And when society prospers, we all do." 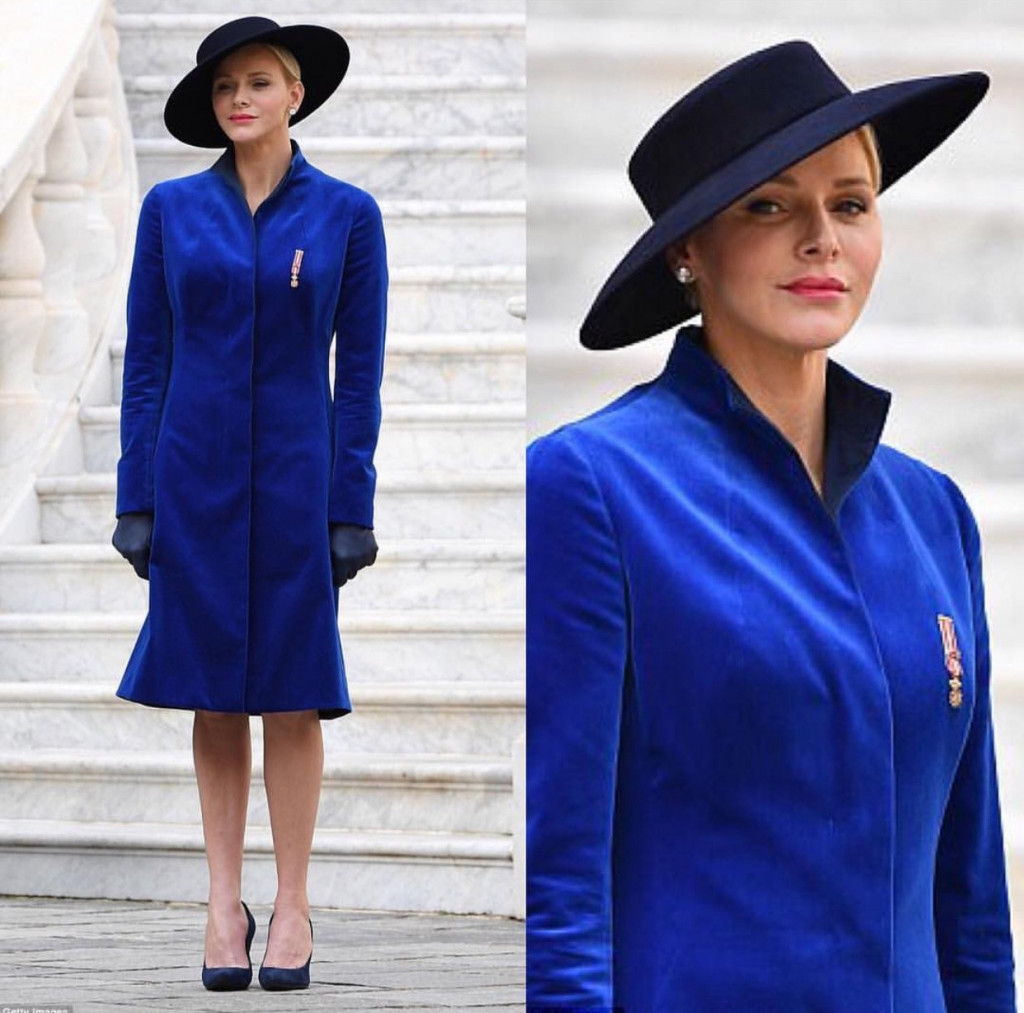 Photo: Instagram @theladymaid[/caption] Breaking news! Her Serene Highness is feeling blue! No, not sad – how could anyone be sad on National Day, the grandest day of the year in the Principality? – literally BLUE. Along with the rest of the Grimaldi family, Princess Charlene emerged from the palace in a cobalt blue velvet custom designed Akris coat with navy blue satin details. A bold move that garnered a few side eyes and had me humming the tune “she wore blue velvet”. Underneath the Princess opted for a simple velvet shirt-dress accessorised with navy blue leather gloves a navy blue suede pumps. [caption id="attachment_25292" align="alignnone" width="640"] 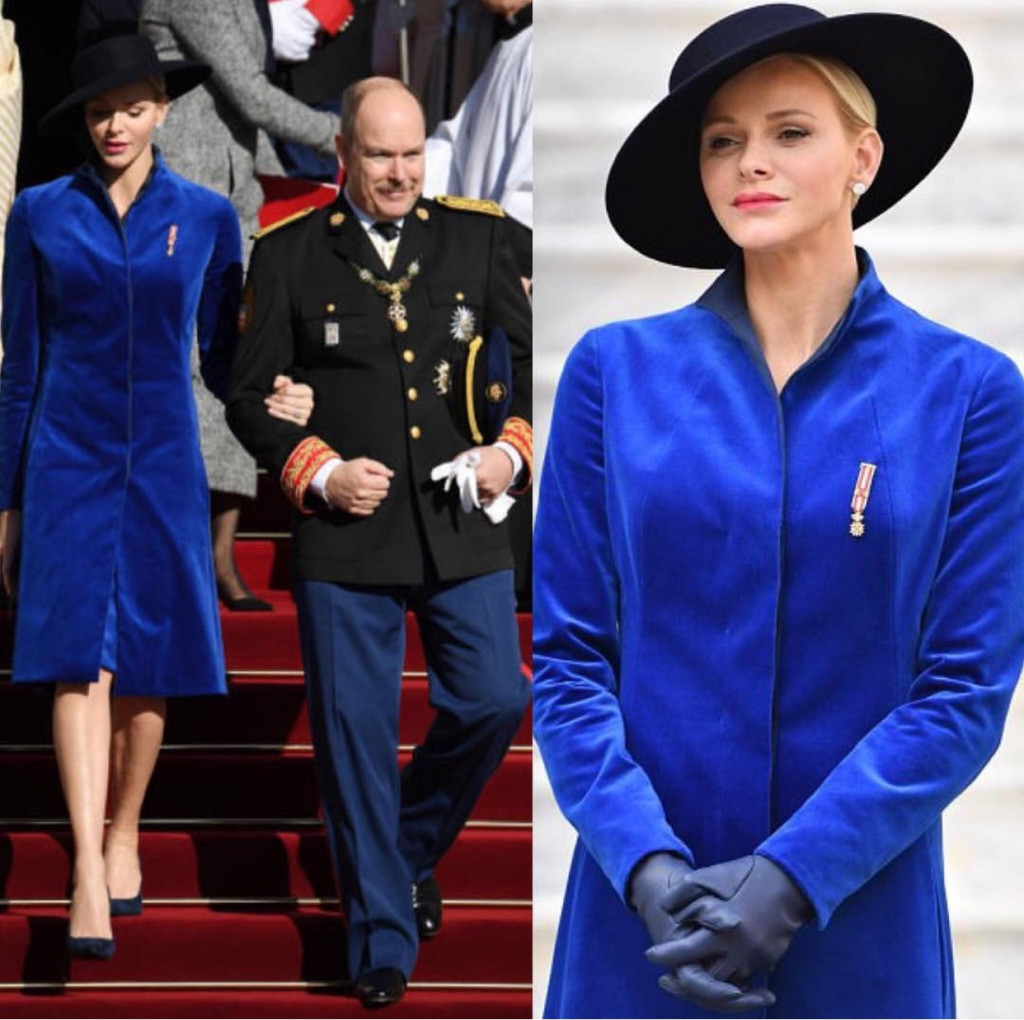 Photo: Instagram @royaladdicted2[/caption] What really set the look off was a navy blue hat worn tilted to side like a society lady from eras past also designed by the house of Akris. Minimal makeup with a coral lip and simple diamond studs complimented this simple but stunning ensemble that the photographers couldn’t get enough of. Stepping out of the Cathedral on the arm of Prince Albert, the sun accentuated the crispness of the velvet as excited watchers gleefully captured the scene on their phones. Princess Charlene has been a supporter of Akris for some time now attending the royal wedding of Prince William and Kate Middleton in London in a grey coat from the house and posing for her official engagement photos in a pale silk green gown. Princess Charlene, this is one for the stylebook! [caption id="attachment_25294" align="alignnone" width="640"] 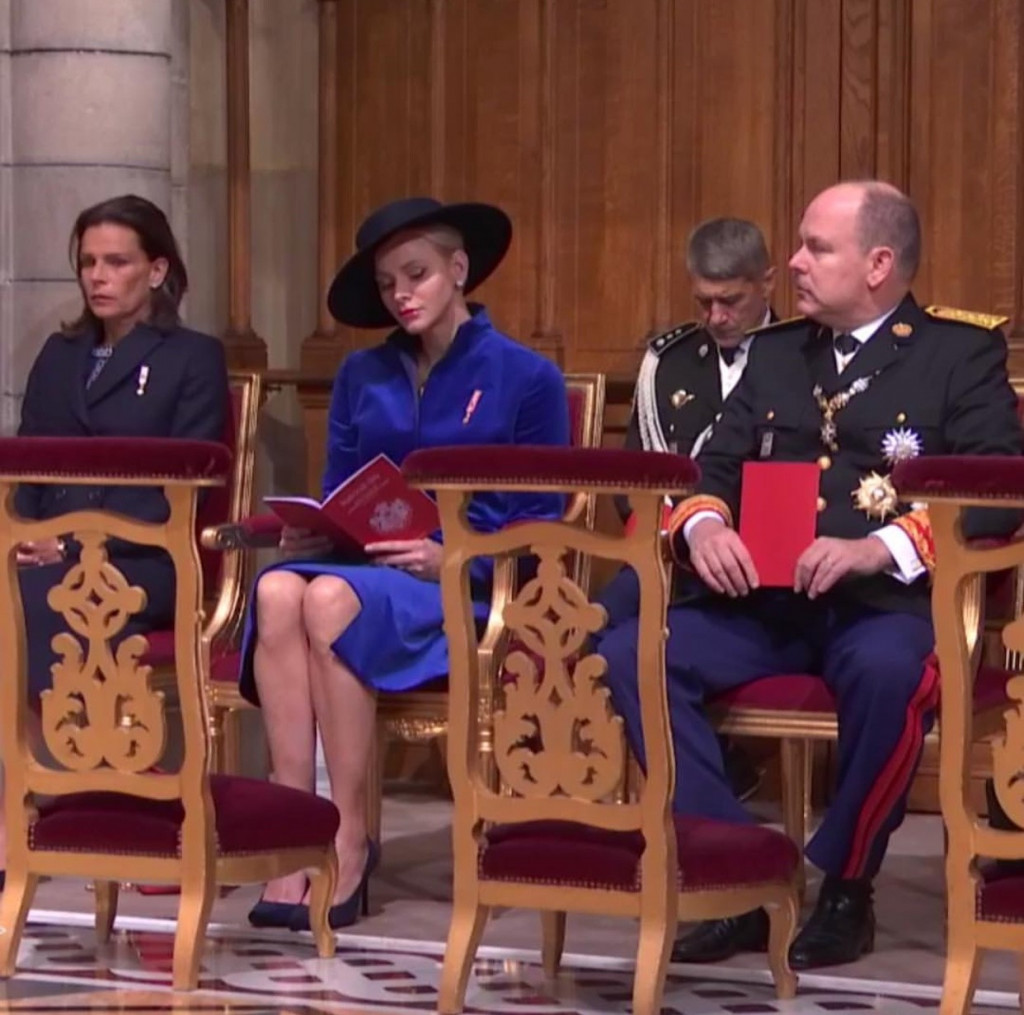