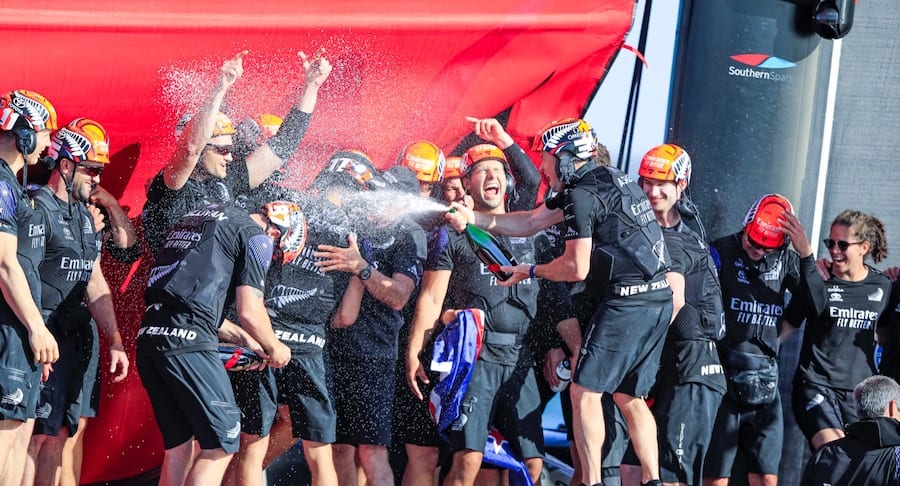 Monaco Yacht Club Committee Member Matteo de Nora and winner of Monaco’s sailing personality of the year Grant Dalton have led the New Zealand Team to victory in this year’s America’s Cup challenge.
26 years after their first Cup win, New Zealand took out their fourth victory in the 36th America’s Cup on Wednesday on their home turf.
Team principal Matteo de Nora, Kiwi captain Grant Dalton, and the crew were commended by the Yacht Club of Monaco for their win over Italy’s Luna Rossa Prada Pirelli.
“Congratulations to Matteo de Nora, member of our committee, Grant Dalton and Team New Zealand who won the famous America’s Cup silver ewer for the fourth time (1995, 2000, 2017, 2021),” the YCM said on its website and social media.
Not to leave out their worthy counterparts, the Yacht Club also made mention of the Italian team, saying, “Thank you also to Patrizio Bertelli’s Luna Rossa and our friends at Circolo Della Vela Sicilia, winners of the #PradaCup for a thrilling spectacle that had us on the edge of our seats.”
Team New Zealand and Luna Rossa were neck and neck much of the last race, making for a nail-biting experience. By the final gate, though, it was clear that New Zealand would take the cup as they had a full 49 second lead over their Italian opponents.
The entire country rallied behind the “Five Million Team” (named for a country with a population of five million), the most successful Cup team in nearly three decades. It was a race and a win that saw them take out the oldest sporting trophy in international sport.
International businessman and philanthropist Matteo de Nora is on the Management Committee of the Monaco Yacht Club, serving as a Sailing Division Officer.
Team Captain Grant Dalton received Monaco’s sailing personality of the year in 2001, and has raced in six Volvo and Whitbread races, winning the Maxi class in 1993-1994. He took over the New Zealand America’s Cup team in 2003.

By Cassandra Tanti and Stephanie Horsman