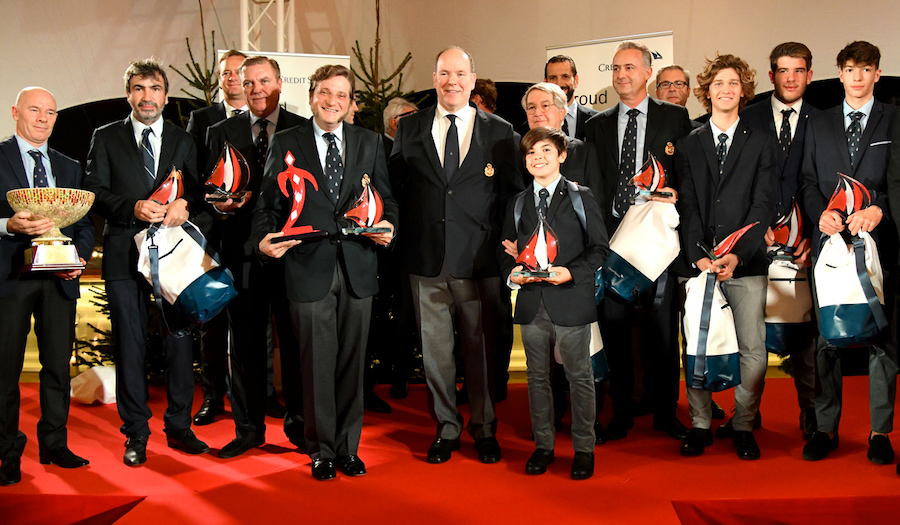 Yacht Club of Monaco racing members came together recently for the club’s annual awards ceremony, held during the traditional Winter Cocktail welcoming new members. In paying tribute to the achievements and team spirit of sailors, HSH Prince Albert II also took the opportunity to announce plans for the next decade of new adventures, which will further advance the club’s sustainable practices.

The Winter Cocktail, held on 18th December, was an opportunity for YCM members to get together and end 2019 in style, while honouring the winners of the YCM Awards 2019 – Trophée Credit Suisse.

In the YCM Youth Awards 2019, which encourage talented youngsters, tributes were paid in the following categories:

The YCM Awards 2019 for adult members – sailors recognised for best defending their club – went to:

This year’s big winner of the Credit Suisse Trophy was Kostia Belkin, owner of the stunning 1908 Fife-design gaff cutter Viola, who has had an outstanding season.

Meanwhile, the cocktail was an opportunity to celebrate the success of the first year of the Monaco Sport Academy. Initiated by YCM member Philippe Ghanem, the academy serves as a gateway to high-level competition by providing 360-degree support for young people from the YCM Sports Section to help reach their full potential.

For the second-year class, 11 young athletes are competing in six disciplines – Laser Standard, Laser Radial, Nacra 15, Optimist, Jet-Ski and Kiteboarding. The MSA aims to help them achieve their dreams of gold, silver and bronze medals at the big international meetings, with their sights set on the 2020 Paris Olympic Games.

“As a new decade dawns, one that will be decisive for the future of our planet, this evening is also a precious moment to share with you some of my convictions,” said YCM President HSH Prince Albert II of Monaco, in his speech to new members. “I believe that one of the key challenges over the next decade is addressing concerns over our climate. In accordance with the United Nations sustainable development programme to 2030, the next 10 years should focus on ocean sciences to increase our knowledge and encourage technical innovation to – hopefully – reverse this decline in the health of our oceans,”

With this in mind, Prince Alberts wants the club to continue expanding and building on projects such as the YCM Explorer Awards, which recognises superyachts that strive to reduce their environmental impact. This year, a combination of new criteria developed to measure this impact will be taken into account when awarding the trophy on 26th March 2020; and the Monaco Solar and Energy Boat Challenge, the seventh edition of which runs from 30th June to 4th July 2020, and transforms the YCM into an incubator supporting research and development in the maritime sector, stimulating the creativity of young engineers to work with professionals to devise clean propulsion methods for boats.

The club will also be pursuing the development of new technologies, including dynamic positioning buoys which are now used in YCM regattas, and the Zero Emission Committee Boat, currently under construction.