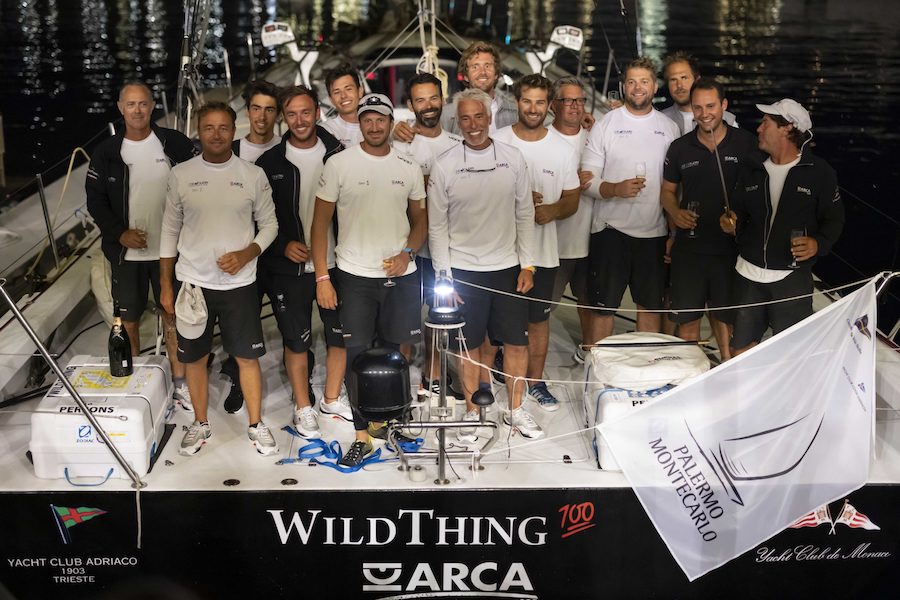 Guido Miani and the 19-person crew of the Arca SGR took the top spot at the Palermo-Monaco sailing race finishing in 59 hours, three minutes and eight seconds.
The Arca SGR crossed the finish line of the Palermo-Montecarlo sailing competition at 11:03pm on 23rd August, giving skipper Guido Miani his fourth title on this classic Mediterranean race.
Sailing with his son Daniel and his nephew Francesco Vauban as part of the 19-strong crew, it was certainly a family affair that paid off. The 30 metre, 28 tonne vessel was built for speed and agility, and the crew showed themselves to be up to handling her earlier this year when they came away victorious from the 68th Rolex Giraglia and now at the Palermo-Montecarlo.
“Conditions were tough, but it all went very well. We had light winds on three-quarters of the ascent of Sardinia then almost 30 knots in the Strait of Bonifacio before light winds again. But we were able to really test the boat’s performance,” said Guido Miani upon his arrival in Monaco. “The Rolex Giraglia was the first objective, the Palermo-Montecarlo the second, now we’re preparing for the Worlds that take place 6th to 11th September in Porto Cervo and will bring together in one place, for the first time, eight 100-foot boats – it’s historic.”
The battle for second place was hugely suspenseful as Pengradon VI and Aragon vied for position. In the end, it was the Pendragon VI, captained by Laurie Davidson, who overtook the Aragon in the final few metres.
Many other big names competed in the race, including Kito de Pavant and Gwen Gbick on board their Class 40 HBF-Reforest’Action. Also participating was Yacht Club (YCM) of Monaco’s Neil Cheston on the Eupraxia. He had several members of the YCM’s adult sailing division with him, giving them the opportunity to experience their first offshore race.
The Palermo-Montecarlo is the last official competition before the Transat Jacques Vabre.
Organised by Circolo della Vela Sicilia, in partnership with Yacht Club de Monaco and Yacht Club Costa Smeralda, it’s become a major event on the calendar since its launch in 2005. The official announcement of the winners will be given on Thursday 26th August at the prize-giving ceremony.