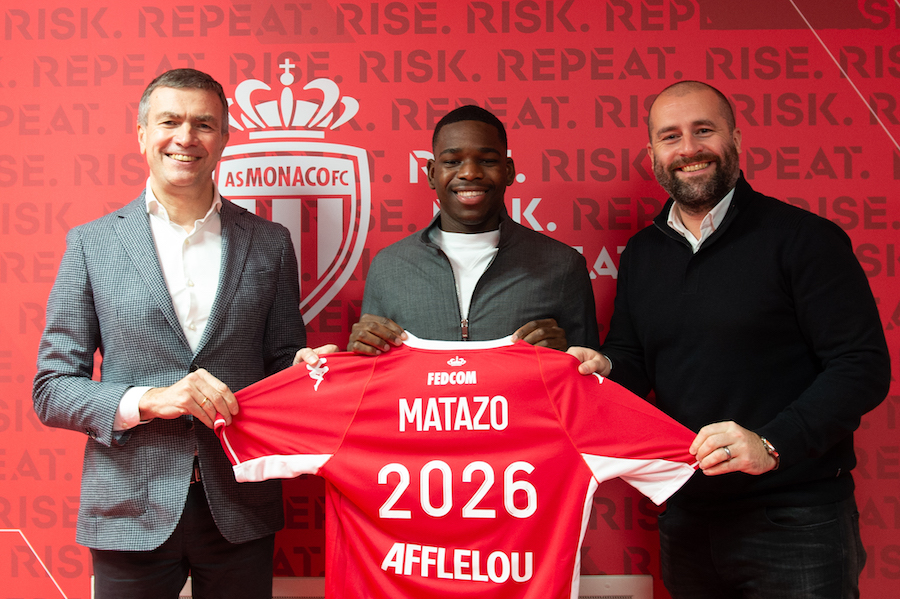 AS Monaco’s Belgian prospect Eliot Matazo has vowed to “climb the ladder under the Monegasque jersey” as he signed a new contract keeping him at the Principality side until 2026.

The Belgian U21 midfielder has asserted himself as a first-team regular this season making 11 appearances in Ligue 1, six of which have been starts. He has prospered in a double pivot role alongside Aurelien Tchouameni, a partnership that is constantly improving as familiarity and understanding grows.

In a press conference on Friday, AS Monaco manager Philippe Clement told Monaco Life, “I’m happy that he’s re-signed because the important thing here is the project with the young players. It is clear that he has talent.” The Belgian manager, however, said that his compatriot needs to improve: “In terms of selection, he has to prove himself every day.”

In a press release, Vice-President Oleg Petrov was full of praise for Matazo, saying, “After having stood out during his time at the Academy, Eliot quickly adapted to the requirements of the professional group and showed very good things on the pitch.”

In the same release, Matazo thanked the club that has developed him from a young age, stating, “I would like to thank the Club for once again showing its confidence in me. Since my arrival in 2018, I have had the opportunity to assert myself and progress within AS Monaco Academy.”

Signing until 2026, Matazo now has the task of repaying the faith that the hierarchy have shown in him, and he says he is determined to do so. “I am attached to it (the club) and I intend to continue to be fully involved in order to climb the ladder under the Monegasque jersey.”

Local News Stephanie Horsman - December 27, 2021
People still affected by the massive explosions that shook Beirut last year are being given renewed assistance by the Monaco Red Cross after an international Red Cross appeal.

How will hydrogen power the maritime sector?

Local News Cassandra Tanti - July 7, 2021
If you are interested in learning more about hydrogen as a promising alternative to fossil fuels, then take part in this week’s Monaco Hydrogen Working Group roundtable in Monaco.