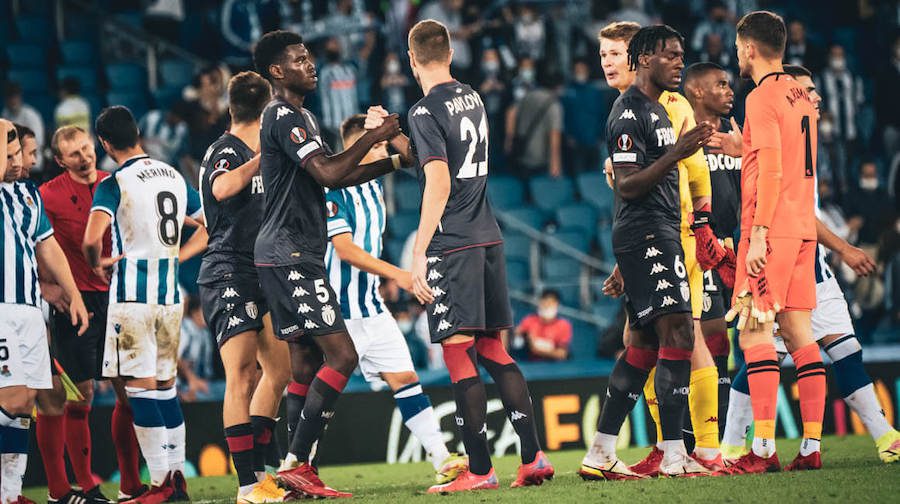 AS Monaco ground out a well-earned draw against Real Sociedad in their second Europa League fixture of the season. Despite taking an early lead, ASM had to survive a second-half onslaught in order to take away a point from the Reale Arena in San Sebastian.
ASM came into this crucial fixture on the back of a fine run of form, which has seen them go unbeaten in their last four competitive matches. If they were to continue this trend, they would have to do so without numerous key senior players, including captain Ben Yedder and influential playmaker Golovin, with Nico Kovac opting for an inexperienced, youthful Monaco side.
ASM, however, got off to a dream start, taking the first meaningful chance of the match. The captain for the night, Axel Disasi, rose highest at a corner to power in a header, with the ball making its way into the bottom corner via the left-hand post.
Neither side managed to muster any clear-cut opportunities before the break, with both sides reluctant to over-commit in attack.
A tentative, tight first-half gave way to a much more exciting encounter in the second-half. A previously cautious Real Sociedad started to commit more players forward, and a more direct style of play threatened the ASM defence, whilst simultaneously giving Monaco more space to counter-attack.
Sociedad were vindicated, almost instantly, for their attacking approach. Similar to ASM’s opener in the first-half, Merino headed Sociedad level early-on in the second half – expertly guiding in a glancing header from a corner.
Buoyed by their home fans, Sociedad proceeded to launch a full-blown assault on the Monaco goal, registering a string of high-quality chances in quick succession. Most notably, Sociedad midfielder Portu should have done better when he found himself one-on-one against ASM ‘keeper Nübel, but could only shoot straight at the Bayern Munich loanee.
Monaco, in contrast, struggled to create any chance of note in the second-half, and will be the happier of the two sides as the game finished 1-1.
Nico Kovac alluded to this in his post-match conference, stating that, “We carried out a very good match defensively. It is a good result this evening.”
Also questioned on the wholesale changes to line-up, Kovac was quick to back his young stars. “There was a need to bring in fresh blood. I have confidence in all of my players, and that is why I made many changes.”
The point takes Monaco to second place in their Europa League group, behind leaders PSV Eindhoven only on goal-difference.
AS Monaco next host Bordeaux on Sunday afternoon at the Stade Louis II, and Kovac’s side will be keen to go into the upcoming international break with a win.