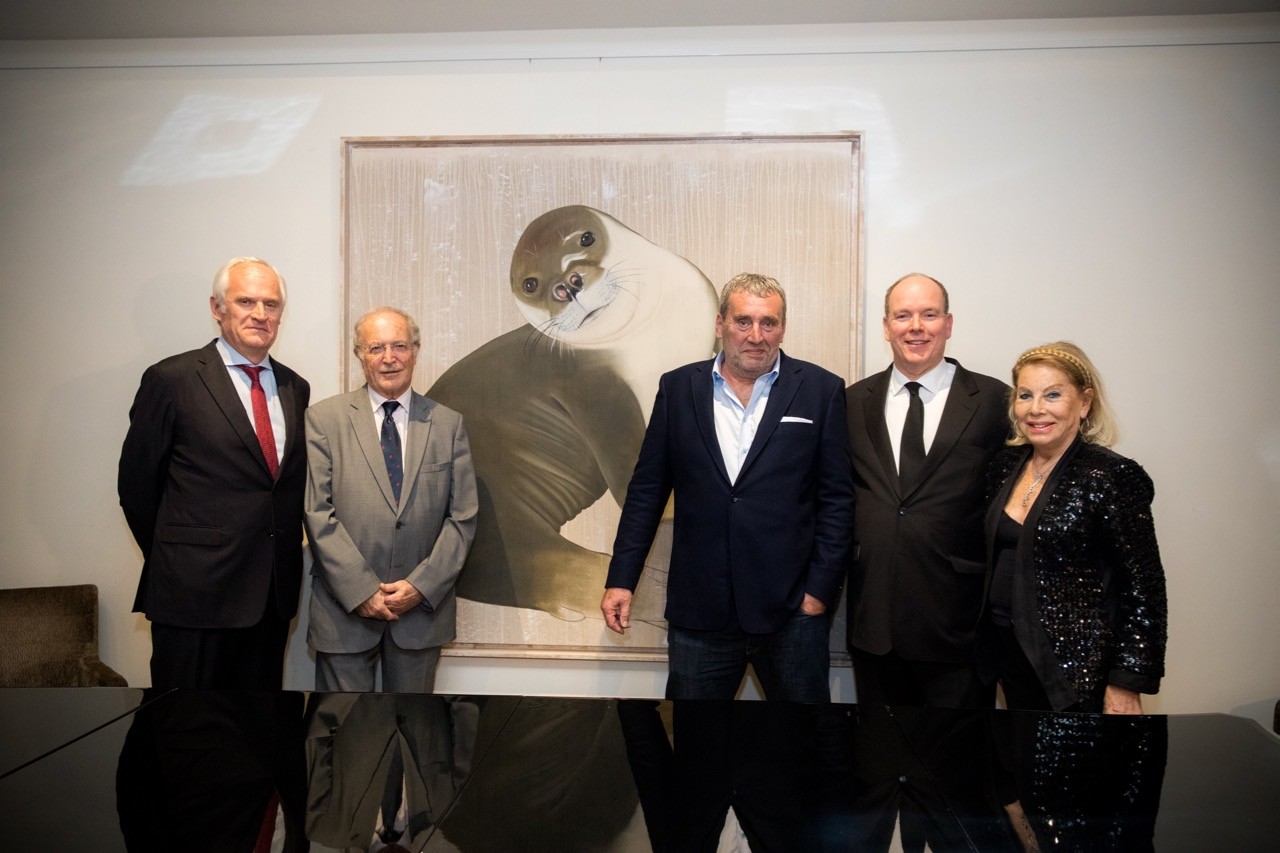 Following his 2016 exhibition “Delete? Monaco”, Thierry Bisch visited CREM on Monday evening for a private cocktail to hand one of his works to Prince Albert and, the next day, to give a lecture.

Born in 1953 and the grandson of a painter, Thierry joined the Ecole Supérieure des Arts in Toulouse at the end of the 1970s, where he developed a passion for drawing and the live model.

Arriving in Paris in the 80s, the artist met the designer Thierry Mugler and became his personal assistant for ten years. Over the next two decades, his many exhibitions represented a turning point in his career and added to his growing reputation. In 2016, as part of the 10th anniversary of the Prince Albert II of Monaco Foundation, Thierry Bisch used the Principality as a backdrop to exhibit the works in his collection. Delete? Monaco presented a number of animal species threatened with extinction.

On this occasion, the Club des Résidents Etrangers de Monaco (CREM), was the setting for one of his works, The Golden Frog of Panama-Atelopus Zeteki.

Following the success of his exhibition, the artist chose CREM’s premises on Monday, April 23, in collaboration with Ferus Gallery, to offer one of his works to HSH Prince Albert for his 60th birthday.

This event was an opportunity for Thierry to thank His Serene Highness for his involvement and commitment in the fight against the threat of extinction of protected species. On the following day the artist returned to CREM to give a lecture on the sixth wave of extinction of animal species and to exchange points of view on the subject with members present.

Singing legend Sting will be honoured at this week’s Monte-Carlo Gala for Planetary Health, as Prince Albert rolls out the red carpet to raise money for his Foundation’s conservation efforts.

Jean-Marie Véran, Special Advisor to the Minister of Foreign Affairs and Cooperation, Isabelle Picco, Ambassador Extraordinary and Plenipotentiary of Monaco to the UN and Serge Telle, Minister of State, at the UN Photo: CD.[/caption] The High-Level Forum on Sustainable Development, convened by the UN’s Economic and Social Council (ECOSOC), is being held at the United Nations Headquarters in New York from July 17 to 19. Serge Telle, Minister of State, presented the National Voluntary Review, prepared by the government, on the implementation of the Sustainable Development Objectives on Monday, July 17. Emphasising the importance of collective action to transform the world through 17 goals against hunger, poverty, disease, inequality, ignorance, injustice, irresponsible growth, climate alterations, degradation of the environment, and the destruction of the oceans, he declared: “Monaco spends more than 1.1 percent of its revenues on official development assistance (...) and more than 65 percent of its financing to seven of the least advanced nations, in the form of donations.” “(Bearing in mind) its size and with its means, Monaco wants to be positive and responsible.” Mr Telle added that the Principality has itself reached “a very high level of human development”. Monaco wishes to be an active player in the world by providing development assistance, he said. “It is in our common interest to engage collectively in the way that the United Nations proposes today: that of Sustainable Development.” 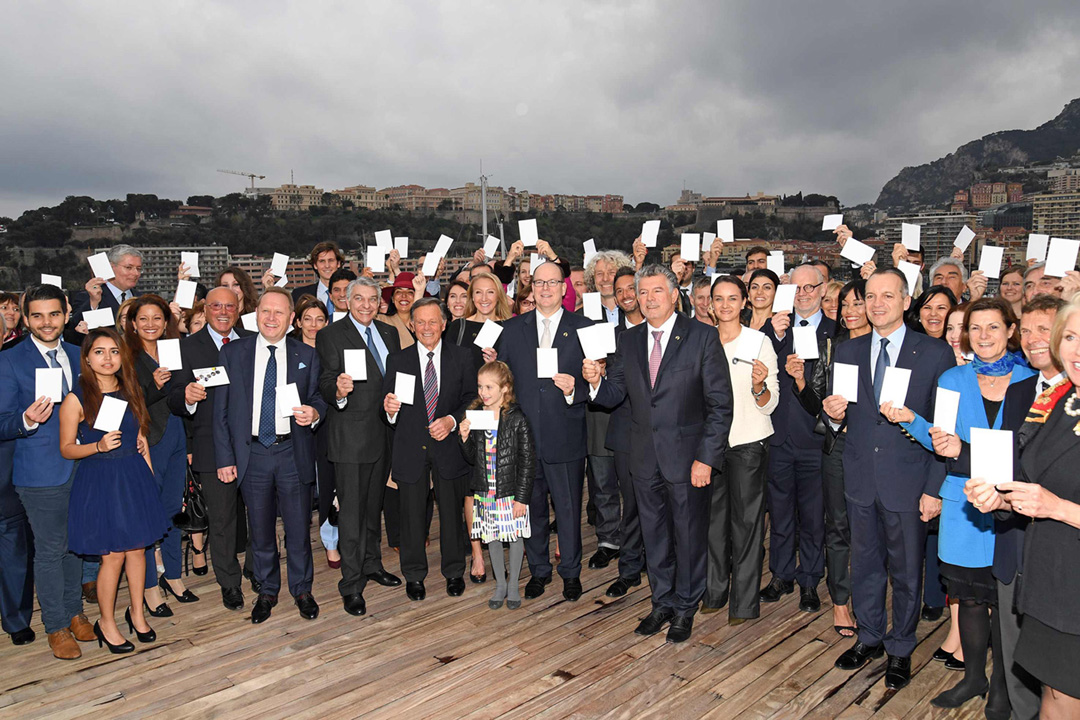 Photo: © Manuel Vitali/Direction de la Communication[/caption] Joël Bouzou, President and Founder of Peace and Sport, launched the #WhiteCard 2017 campaign at the Yacht Club of Monaco in the presence of the Sovereign Prince, the Minister of State, numerous personalities and several great sportsmen including Jean-François Tordo, Paula Radcliffe and Monaco resident, Fiorina Berezovsky of the Monaco Women’s Olympiad Chess Team and youngest champion at Baku 2016. Prince Albert commented, "In my capacity as Head of State, Olympian, IOC Member, Patron of Peace and Sport and the World Association of Olympians, I welcome this initiative, which is naturally anchored in the values promoted by the Principality and its involvement within the sports movement to promote peace." A collective WhiteCard photo was taken on the roof of the Aquarama Riva Bar to launch the 2017 campaign "Show us where you play your peace". The purpose of this initiative is to celebrate the International Day of Sport for Development and Peace. On April 6, everyone is invited to take part using the symbol of white cardboard. "Our campaign for peace #WhiteCard allows us to spread our vision of a peaceful world across the five continents and this year will be no exception" said Mr Bouzou. "Year after year, our Champions for Peace are working tirelessly to promote our message that sport can be a vehicle for change around the world." This year's slogan "Wherever you are, take part in the important event!" invites people to indicate their geographical location in their photos with white cardboard, thus illustrating the "international nature of sport and encouraging people of all races, nationalities and religions to share our common goal of a peaceful society". Take a picture, alone or in a group, waving a white cardboard, as referees do, then post it on Peace and Sport social networks (Facebook,Twitter and Instagram) specifying names and commenting: @peaceandsport # WhiteCard # IDSDP2017