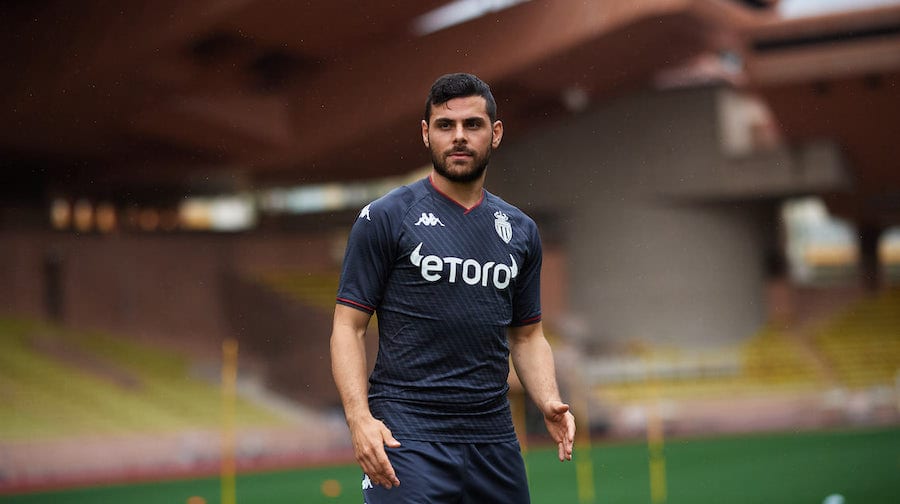 AS Monaco have unveiled their new home and away kit for the 2021-22 season featuring their new sponsor, some traditional elements and a brand new colour.
AS Monaco has once again teamed up with Kappa to craft their newest home-and-away gear for next season and have released a video featuring the teams’ stars and rising stars, as well as rapper Krisy, to give fans a taste of what’s to come.
Using the historic diagonal first created by Princess Grace 61 years ago on the front of the jersey at a precise 55º angle, the home kit will debut a new colour called tango red. Sponsor eToro will be emblazoned across the front and the crest of the team remains at the top left corner, just above the heart. The right top side features the Kappa logo.
The Monegasque crown is represented on the back of the jersey just below the collar, which is a classic round neck. The team’s new brand, Rise, Risk, Repeat, is inscribed on the collar. To complete the look, the team will be sporting red shorts and white socks.
For away games, shades of grey will be featured. The front of the jersey has thin alternating grey and anthracite stripes, positioned like the home kit at 55º angles. The colour was chosen as a nod to carbon, a material used in the making of Formula 1 cars, adding to the idea of speed and elegance.
The v-neck collar is red and grey, giving a splash of colour and has the eToro logo prominently across the front, as in the home jersey. The away shirt also has the crest over the heart and the Kappa logo on the right, keeping the continuity between the two looks. Shorts and socks in charcoal round it out.
The 2021-22 home jersey was worn in an official launch video by Aleksandr Golovin, Wissam Ben Yedder, Aurélien Tchouameni and Krépin Diatta while the away jersey was worn by Youssouf Fofana, Kevin Volland and Caio Henrique. The video is made playful with a song by rapper Krisy and some great action shots of the highlighted players in action.
Fans can get in on the new look early by going to the team’s website online or at the official AS Monaco shop, as well as directly from the Kappa website.