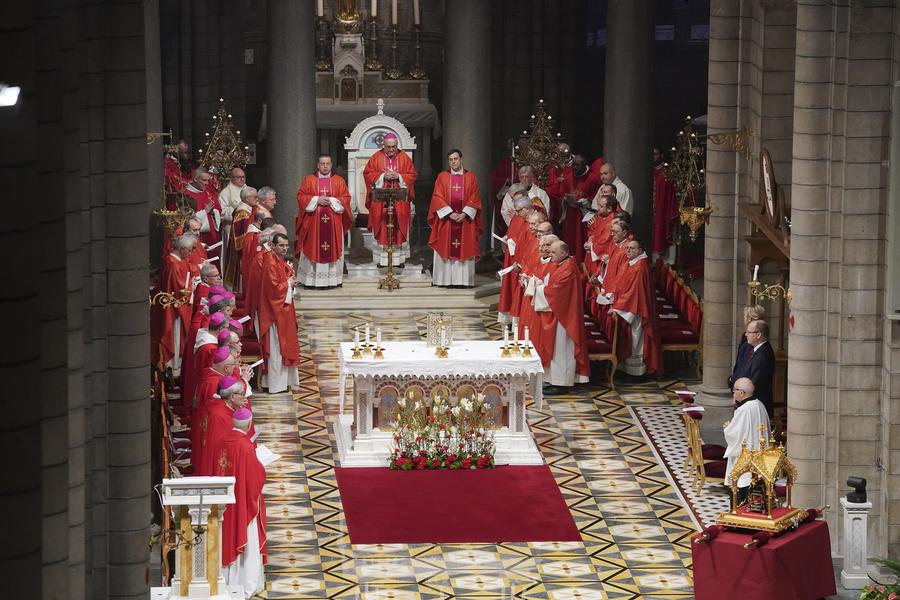 After 20 years as Archbishop of Monaco, Bernard Barsi has stepped down following a moving farewell from the pulpit during the Mass of Saint Devoté.
Monday’s mass for the patron saint of the Principality was bittersweet as, with HSH Prince Albert II, Princess Charlene and many members of the ecclesiastical community in attendance, Archbishop Barsi said his adieus to his flock.
The Archbishop delivered an emotional speech before the blessing, where he remembered first being appointed and spoke directly to the Sovereign Prince, saying: “Monseigneur, the late Prince Rainier III, your father, welcomed me in October 2000, having appointed me by sovereign ordinance as Grand Chaplain of his Palace. It has made me even closer to your family, whom I have accompanied in their moments of pain and joy.”
Later, at a reception held at the Oceanographic Museum, HSH Prince Albert II had his chance to tell the Archbishop: “Thank you with all my heart, in my personal name and in the name of my family, and of the whole Christian community of Monaco, for these 20 years of episcopal priesthood.”
Bishop Barsi will continue his ministry until his successor, Monseigneur Dominique-Marie David, takes his place. “We will meet here on March 8, 2020, in a delicate and significant gesture from the apostolic succession, Mgr David asked me to ordain him bishop.”
This year marks a half century of Bishop Barsi’s position as a priest. Born in Nice, he started his career in the Upper Tinée Valley before being appointed to the Vocations Service of the Foyer de Saint Paul de Nice, where for a decade he was in the service of the church helping young people. He went on to become parish priest in the Paillon Valley, then Vicar General in the diocese of Nice. In May of 2000, he was appointed Archbishop of Monaco, serving for the past 20 years.