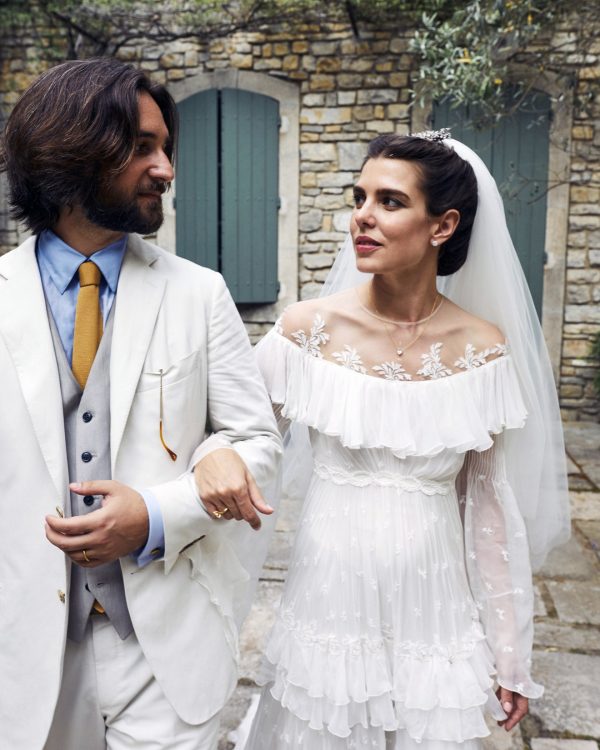 Charlotte Casiraghi and Dimitri Rassam have continued their wedding celebrations with a second, religious service and private reception in the south of France.

While Charlotte Casiraghi, daughter of Caroline, Princess of Hanover, and 11th in line to the Monegasque thrown, wed film producer Dimitri Rassam on 1st June in Monaco, the couple continued festivities on Saturday with a religious service and private celebration at the Abbaye Sainte-Marie de Pierredon, outside St. Remy de Provence.

In the first official photograph, taken by Félix Dol-Maillot, the bride and groom are seen walking arm-in-arm down the aisle, Casiraghi in an off-the-shoulder silk chiffon gown by Giambattista Valli Haute Couture featuring delicate embroidery throughout, accessorising with a simple veil.

The second photo shares the post-nuptial kiss between the happy couple, as Casiraghi clutches a very Provençal bouquet of lavender.

Traditionally speaking, Monégasque royal weddings usually do have several components to them: a civil ceremony, a religious ceremony, and a reception. Casiraghi has simply chosen to space her events out across the month, while past royal brides, like her mother and grandmother Princess Grace, have hosted them closer together.

But the date of the wedding is symbolic: Princess Charlotte seemingly chose to pay homage to her mother’s first marriage to Philippe Junot, which took place on 29th June 1978.

Casiraghi and Rassam became engaged in March of 2018 after a year of dating and they also share a son together, Balthazar, who was born in October of 2018.