Christmas at the Palace

Christmas at the Palace 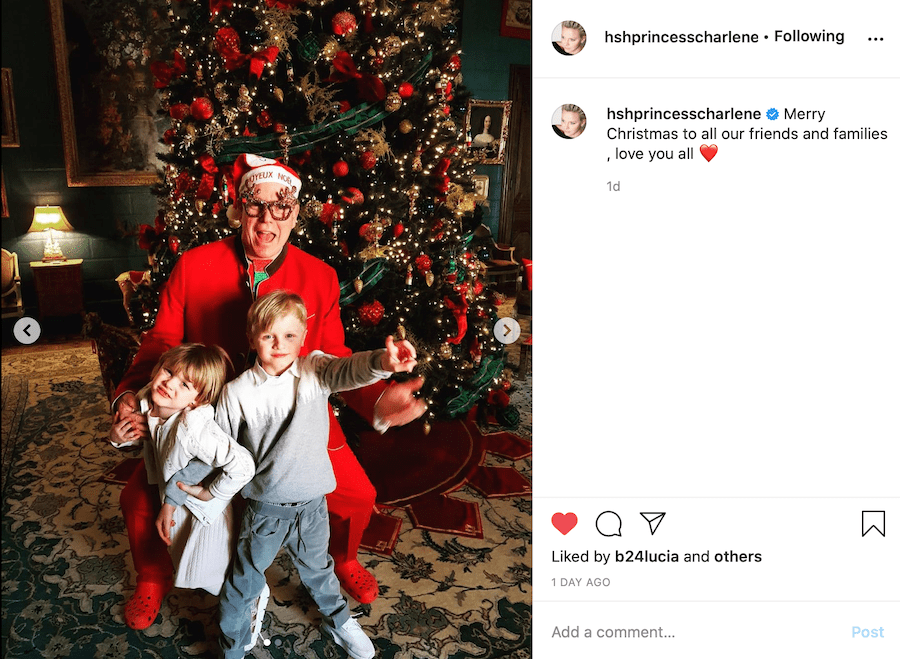 Princess Charlene has spread a little virtual Christmas cheer, sharing hilarious snaps of Prince Albert getting in the festive spirit this year – a playful contrast to the traditional holiday family portrait released earlier by the Palace.
On Wednesday, the Palace released a video of the Christmas family portrait on its Facebook page, with the message: “May the spirit of Christmas be with you throughout the New Year. We wish you a Merry Christmas and a happy New Year 2021.”
The picture was reportedly taken on 18th November, the day before Monaco’s National Day, which explains why Princess Charlene isn’t sporting the daring undercut that she revealed at the Palace gift giving event in mid-December.

“It’s a really nice picture with a different kind of Christmas tree and a different tone. It’s kind of white and silvery more than red and green. It’s really beautiful,” Prince Albert told People magazine.
Due to the ongoing Covid situation, the Princely family spent a “low-key” Christmas between Monaco and Roc Agel in the hills above the Principality.
In pictures shared to Instagram by Princess Charlene, we can see that they were joined by Princess Stephanie and her children at the Palace on Christmas day.


The Princess is also keen to show off her husband’s jovial side and capacity not to take himself too seriously, with the Prince sporting red Christmas pyjamas and matching red crocs, while another shows him wearing a Christmas hat and reindeer glasses in front of the giant tree with twins Hereditary Prince Jacques and Princess Gabriella (top photo).


A third shows the Princess kissing the family dog, giving a close-up of her bold new hair style. ‘Merry Christmas to all our friends and families, love you all,’ the caption read.


Earlier in the week, Princess Charlene shared polaroid snaps of the family enjoying a Wild-West themed evening, with her cowboy Prince and adorable kids.